September 7, 2017 - At the centre of the TRIUMF campus, inside a newly erected and gleaming building, the Advanced Rare Isotope Laboratory (ARIEL) sits poised to launch TRIUMF to the forefront of cutting-edge isotope science. As TRIUMF’s flagship multidisciplinary research facility, the laboratory promises to triple TRIUMF’s production hours of rare-isotope beams for research, positioning TRIUMF as an essential production hub for rare and valuable isotopes in North America.

While not entirely complete yet, the ARIEL building has been slowly filling with the experimental infrastructure that will eventually bring about the ARIEL era of science at TRIUMF. The development of the ARIEL facility has been a years-long endeavour, with each area of the facility boasting made-in-house innovations essential to this new era of research.

Deep in ARIEL’s basement, TRIUMF engineers, physicists, and technicians have already completed a prototype for a revolutionary new isotope beamline. They plan to expand this beamline to transport various isotopes from their origins in the ARIEL target hall to their destination in experiments and chemistry laboratories around campus.

Elsewhere, other key components of the new ARIEL era are also beginning to take shape, including the culmination of one of the most important and recent ARIEL initiatives: the target systems. 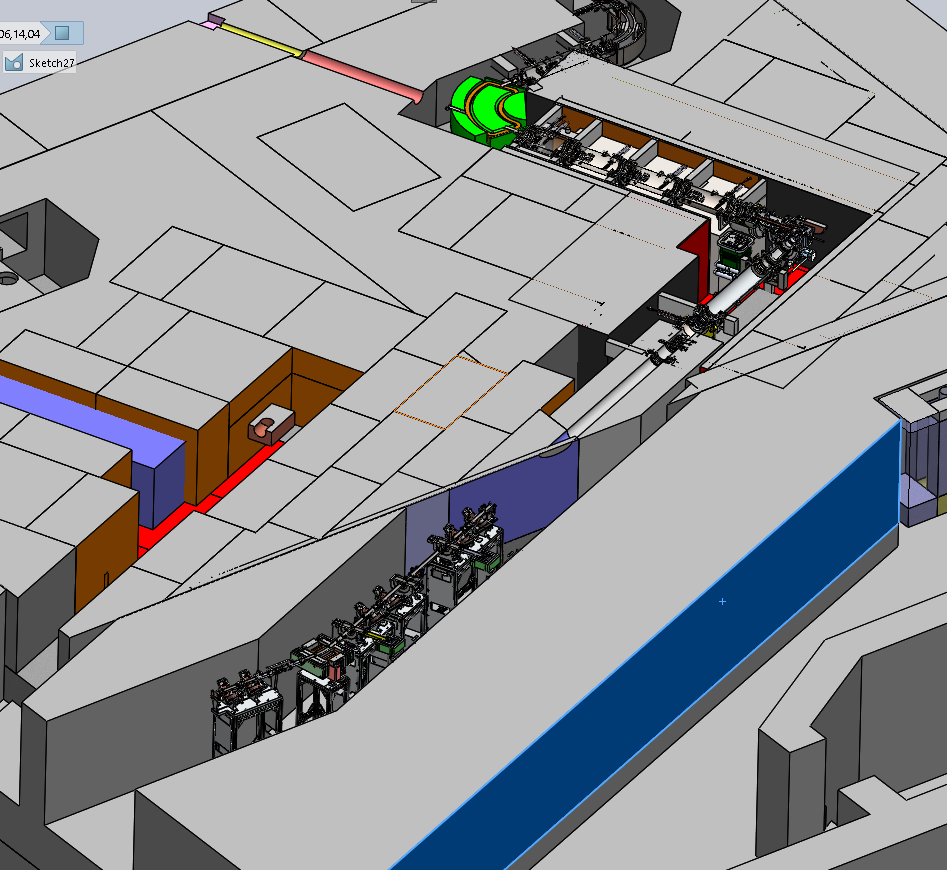 With precision aim and incredible speed, high-energy particles from TRIUMF accelerators collide with stationery blocks, performing an alchemic transformation at the subatomic level. These dense blocks, known as “targets”, are where the much-sought-after rare isotopes issue forth. Such sites for the collisions between high-energy particle beams and special target materials are some of the most crucial components in the production schematic for radioactive isotopes. Each of ARIEL’s two state-of-the-art target stations will house a unique target material: a thin slab of a particular metal, ceramics, or a heavy, radioactive element in the actinide series of the periodic table. Incoming beams of high-energy particles, either protons from TRIUMF’s main cyclotron or electrons from the ARIEL-specific electron linear accelerator (e-LINAC), will strike the target within the target stations, irradiating the material and creating radioactive isotopes. ARIEL scientists can then separate these individual isotope varieties using mass and charge and channel them to the experimental areas in the Isotope Separator and Accelerator (ISAC) facility. Other isotopes within the target will also be chemically extracted for research and application, including for TRIUMF’s Institute for Advanced Medical Isotopes (IAMI).

ARIEL targets and the target hall in which they are housed have begun to materialize from design files and paper blueprints. Improving on the existing designs used within the ISAC facilities and incorporating lessons learned from key design ingredients at similar laboratories around the globe, the ARIEL design team has begun to bring its target system to life. Included in these upgrades are a hermetically-sealed target container and a secondary gas safety system, each designed to increase target operator safety.  Similarly, contract tenders have been confirmed for the design and construction of the suite of ARIEL hot cells, a major component of the target hall infrastructure that will be used to handle radioactive targets safely. These hot cells, where targets and materials can be quarantined while work is performed on them, will allow for safe and easy target operations. All design concepts were recently validated by an international review of the ARIEL target station design held at TRIUMF in June, 2017.

The ARIEL team also recently announced the completion of the ARIEL Development Centre. This newly-renovated office space is primarily home to working groups for the ARIEL target stations and target-hall infrastructure, but will also serve as a hub for future design and ARIEL-related collaboration.

The initiative to create a Development Centre for the ARIEL team arose from growing recognition of the importance of stringent project management principles, including close collaboration and rigorous documentation protocols. Throughout the first stages of ARIEL development, the team noted the use of accurate and complete documentation as an essential requirement for successfully bringing such a complex endeavour to fruition. These documentation practices ensure that installation, operational and repair work goes smoothly in future. As ARIEL awakens and more components come online, team members can take advantage of a central headquarters for more discussions like these. There, they can more readily collaborate with one another in developing the various aspects of ARIEL and supporting a collective focus on accurate and complete documentation. 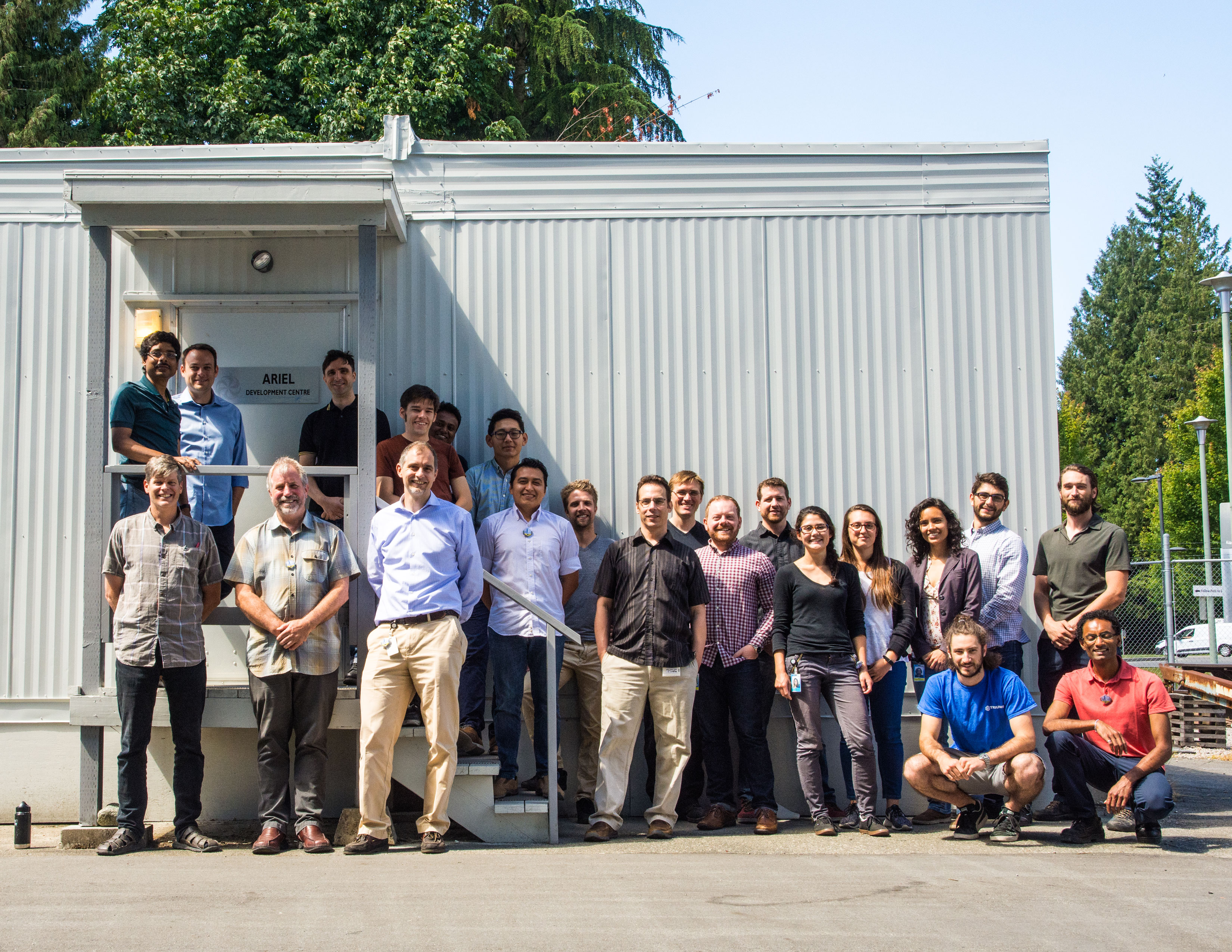 ARIEL team members with offices in the Development Centre, as well as other TRIUMF community members who helped this renovation become a reality, posed for a group photograph on July 27th.

The next phase of work for target stations is to advance the conceptual designs to final engineering solutions. Designs are progressing with the close support of four designers in the TRIUMF Design Office. This work will be one of the primary foci for the ARIEL team over the next year; fabrication and installation of the further design pieces will follow closely, with the intended first delivery of rare isotope beams slated to arrive in 2021.

Silke
eguetre
sshepherd
10 members
Created: Jan 04 2010
This is a closed group. Only a group administrator can add you.