Freedman held positions as a nuclear physicist at Lawrence Berkeley National Laboratory (Berkeley Lab) and the University of California at Berkeley. His career in nuclear physics was highly regarded, encompassing several groundbreaking endeavours like performing the first test of Bell’s inequality (testing whether quantum mechanics was an incomplete theory) and building a detector to hunt for neutrino oscillations (KamLAND). Stuart also contributed to a variety of disciplines outside of the field of nuclear physics, including particle physics, atomic physics, astrophysics, and cosmology.

Freedman was celebrated not only for his accomplishments in physics research but also for his sustained commitment to mentoring early-career physicists – one of whom was TRIUMF scientist Ania Kwiatkowski. Freedman co-supervised Kwiatkowski during her undergraduate thesis, where she was first introduced to elements of atom trapping – a technique for isolating and enclosing atoms or ions in a very specific, controlled environment for use in a wide variety of experimental techniques in nuclear physics. 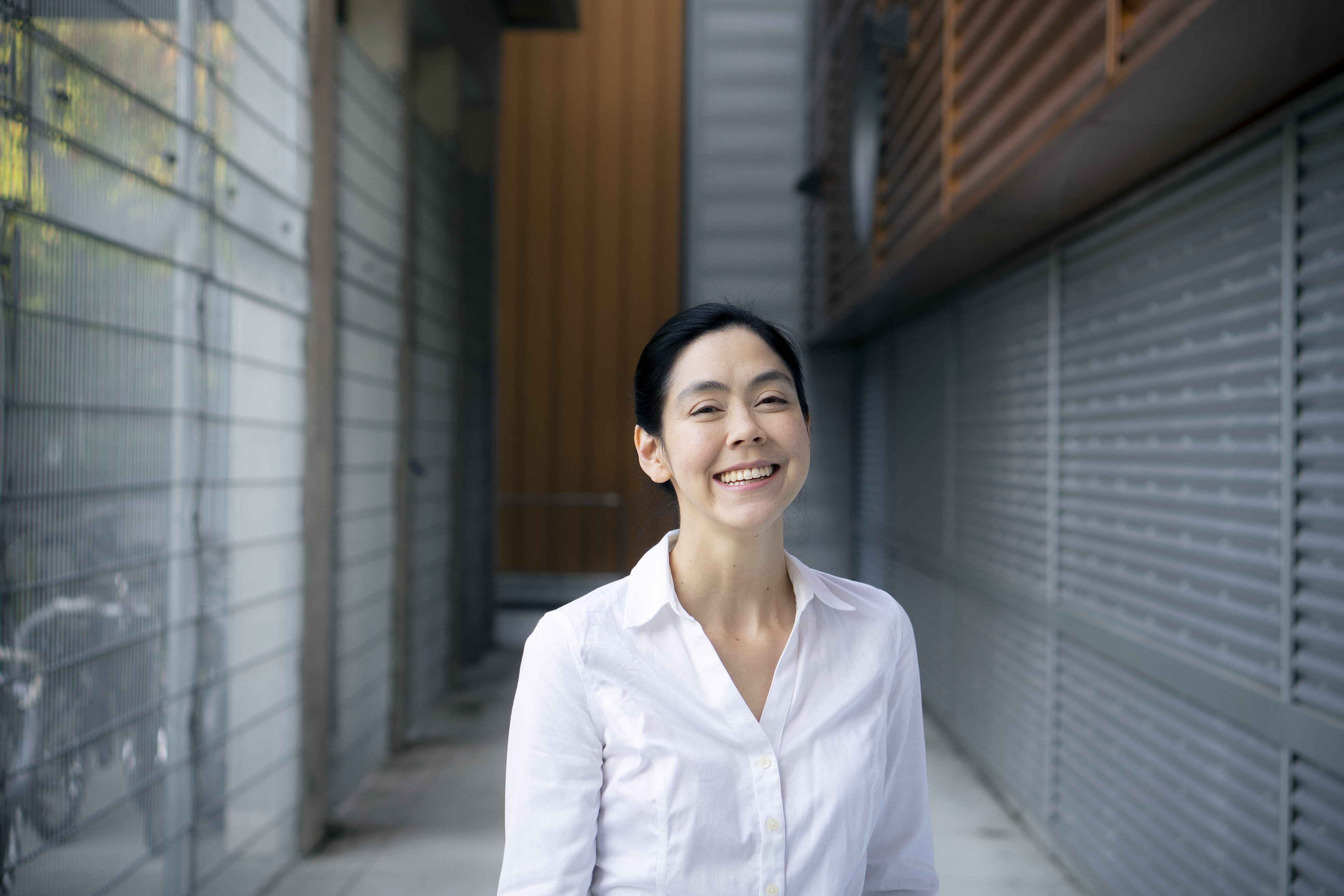 Now, as a TITAN research scientist at TRIUMF, Kwiatkowski and her team wield some of the world’s best tools (including TITAN’s leading-edge mass spectrometry apparatus) for pushing the limits of our understanding of nuclear structure and behaviour. Using ion-trap decay spectroscopy, the TITAN group explores a wide variety of physical phenomena, from investigating the nuclear structure of atoms to testing fundamental symmetries in the Standard Model.

For those who have had the privilege of working with Ania and have experienced her enduring fascination with nuclear physics and her career-long dedication to her work, news of her award win comes as no surprise. 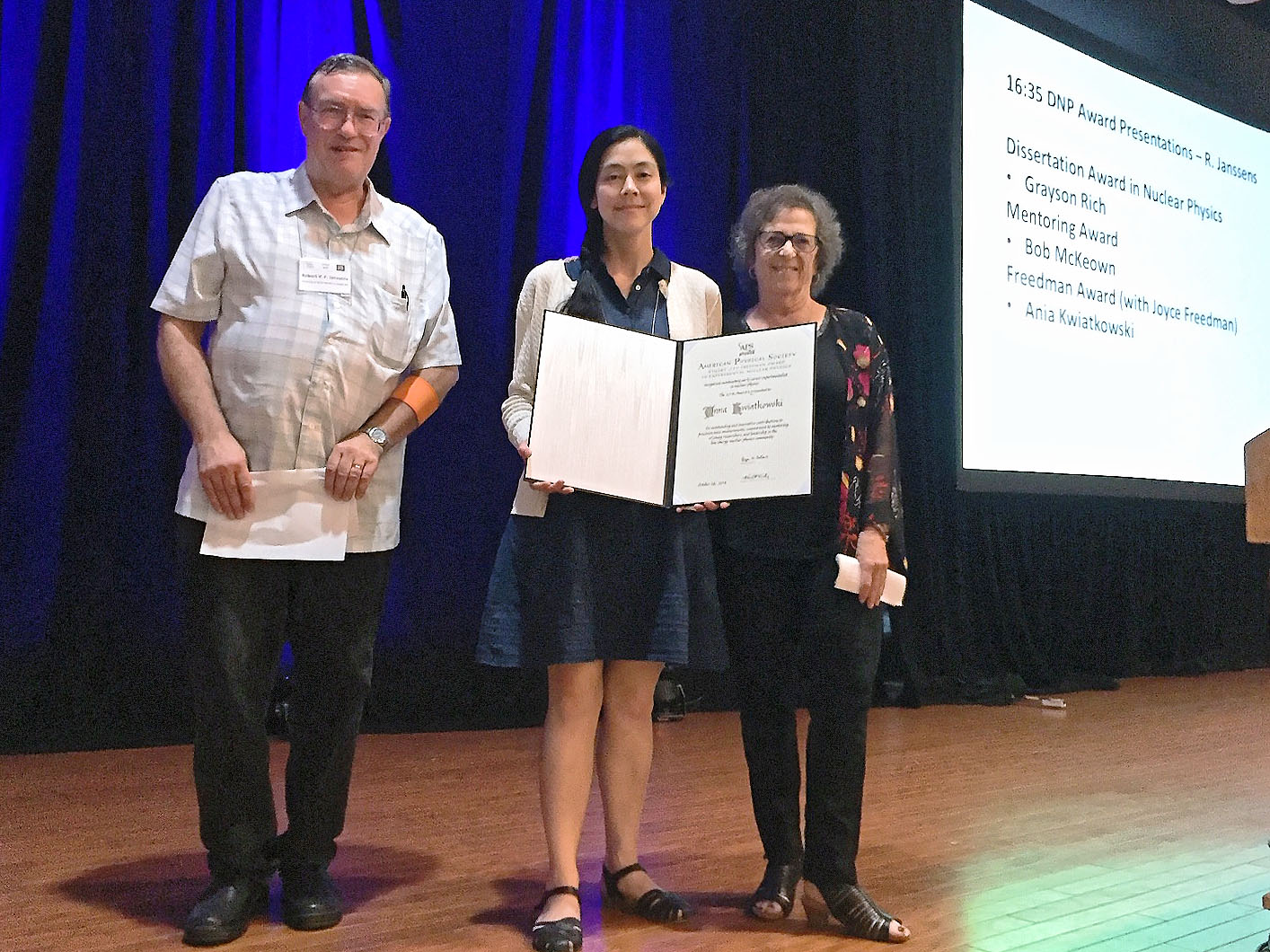 We caught up with Ania to learn more about her award, her time alongside the late Dr. Freedman, and her future aspirations:

TRIUMF (T): How does it feel to win the inaugural award that celebrates your former supervisor’s legacy?

Ania Kwiatkowski (AK): I am deeply honoured. The fact that I was chosen is incredibly meaningful, as I got to share a unique connection with him and can personally attest to how incredible he was as a physicist, scientist, and mentor. It is also very meaningful that his partner Joyce was there to present the award – the whole experience feels like a full circle that has come back to Stuart.

T: Looking back on your time spent with Stuart, do you appreciate the experience more?

AK: Most definitely. I knew that Stuart was a big deal, but not quite how big. When I started learning more and advancing in my career, I realized that Stuart was not just a good physicist, he was a really, really good physicist. I compare the feeling to how children see their parents: When we’re young and growing up, we think ‘Oh, well, it’s just my parents.’ By the time we turn thirty, we realize just how much our parents knew and how much they looked out for us. I think the maturity that I’m gaining really helps put my experience as one of Stuart’s mentees into perspective because it’s not often you get to work with someone who has mastered the virtues of leadership, scientific research, and experimental technique – all skills and characteristics that Stuart truly embodied.

T: What’s one thing that you wish people could know about Stuart?

AK: When I was going to meet Stuart for the first time, I was very intimidated because I knew he was such an incredible physicist. However, after meeting him all I could think was “Wow, what an incredibly nice person!” Stuart was an amazing physicist and mentor, and was surprisingly and enduringly modest despite his tremendous accomplishments. He really was a titan in his field and had experience that spanned so many different areas: technique, scientific knowledge, academic talent, and beyond. His outside-the-box thinking was crucial to the field of physics and is something that we will all truly miss.

T: What are you most looking forward to in the future, after winning this award?

AK: I’m looking forward to doing more good science and continuing to honour the legacy of Stuart and all of my mentors and champions. Winning this award was a vote of confidence, and I want to make sure I live up to that vote and do everything I can to continue practicing good science and enabling the next generation of scientists.

Congratulations on the award, Ania!