The Makings of a Vanier Scholar 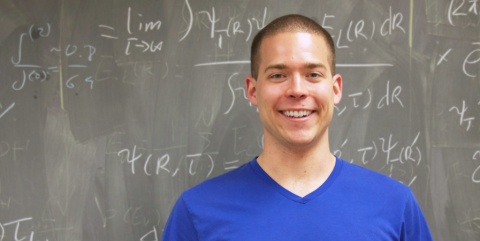 It’s not a coincidence that these are all qualities he’s attributed to Sébastien Rettie, current University of British Columbia (UBC) doctoral student and recipient of the prestigious Vanier Canada Graduate Scholarship (Vanier CGS).

Sébastien, who completed his undergraduate honours thesis under the supervision of Carleton University’s Alain Bellerive, began his career in physics at TRIUMF. “I actually started as a co-op student during my undergrad, at the University of Ottawa”, Sébastien explains. “I did eight months with the T2K experiment, then I came back for my last term to work on the ATLAS experiment, which I’m currently working on.”

While at TRIUMF for his co-op, Sébastien worked with Anadi Canepa (now at Fermilab), under whose supervision he joined ATLAS. She was his first ATLAS connection and set the stage for the rest of his academic career. His trip to CERN during his last co-op term with the IPP fellowship cemented his interest in the multi-national collaboration. “It was a great experience that essentially told me, ‘this is the group I want to work with’,” Sébastien says. “The ATLAS collaboration is huge, and it’s really great to be able to work with so many different people who have so many different perspectives.”

It was also during his co-op terms that he was first introduced to Oliver Stelzer-Chilton. Introduced isn’t quite the right word, however, as Oliver points out: “I met Sébastien quite some time ago – I was running the undergraduate program and I remember interviewing him.”

Fast-forward a couple of years and the former co-op student is now working towards his PhD, under the supervision of Oliver here at TRIUMF and Colin Gay, Professor and Head of UBC’s Department of Physics & Astronomy. For Oliver, it’s an exciting and well-deserved award. “He’s always been a stellar student. Highly motivated and very driven. He’s one of the best students I’ve ever worked with. He finishes one study and he’s already ready for the next one – he’s a constant high-pressure performer.”

Sébastien’s doctoral research is concerned with the search for new high mass resonances, which are predicted by theories that go beyond the Standard Model of particle physics. To do this, he examines the invariant mass distribution of a system of two muons that decay inside the ATLAS detector, and searches for “bumps” in that spectrum. “You look at the graph and if you see a bump then it might be something you can’t explain (hopefully),” Sébastien says. “And even if you don’t see a bump, you can still set limits on theoretical models.” At the end of the day, he explains, the research is about the search for new force-carrying particles –specifically, the search for the Z prime boson.

Sébastien’s research will be funded by the Vanier CGS for the next three years. The scholarship, which began in 2008 to boost Canada’s ability to attract exceptional doctoral students, is valued at $50,000 per year and is open to students who demonstrate scholarly excellence and leadership skills. Up to 167 scholarships are given annually and in various fields.

The application process is an extensive one, Sébastien notes, “You need to plan in advance what you’re going to write about.” Applicants for the Vanier are required to submit documents that identify their research contributions and their leadership and communication skills, as well as provide a leadership reference letter. While the process was long, it was certainly worth it: “I wasn’t expecting the Vanier and then when I got it I thought, ‘this is amazing!’”

He attributes much of his success to his time at TRIUMF. Through his undergraduate experience as a co-op student, Sébastien learned both what he wanted to do, and what he didn’t want to do. “From particle physics, I wasn’t sure if I wanted to do quantum computing, so my third co-op was in Germany,” He says. “I decided that even though quantum computing was interesting, it just wasn’t for me. I’m glad I tried it, but I eventually came back to particle physics in the end.”

It’s the search for the big answers that keeps him coming back to the field, says Sébastien. “It may sound cheesy, but at the end of the day we’re asking the biggest, deepest questions – the very big questions that don’t necessarily have immediate applications but are really satisfying when you sit and think about it.”

Congratulations on your success, Sébastien!