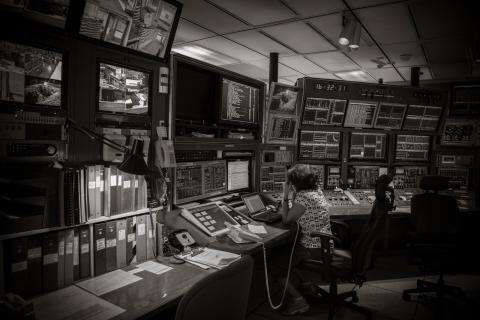 In September, eight research laboratories from around the globe hosted over 200 photographers at their world-class facilities for a unique opportunity to go behind-the-scenes and capture the beauty of physics through the Global Physics Photowalk 2015. From thousands of submissions, each laboratory curated a shortlist of photos for the global competition. An international panel of judges comprised of artists, photographers, and scientists scrutinized the photos to crown winners in the Jury Category. A public, online vote determined winners in the People's Choice Category.

First Place in the Jury Category is awarded to Katy Mackenzie’s photograph of TRIUMF’s Main Control Room (see photo above). For the Vancouver-based mortgage broker and hobbyist photographer, the photo yields childlike marvel and memories associated with visiting her father, since retired TRIUMF senior research scientist, on the job over 30 years ago.

“My father worked at TRIUMF,” explained Mackenzie. “I have vivid memories of sitting on the floor of the Control Room watching him work. I was too young to tell time and imagined the clock was a countdown to some super secret mission launch.”

“This photograph speaks to the human experience and everyday qualities of work, science, and technology,” noted Juror Robert Bean, an artist, writer and professor at Nova Scotia University of Art and Design University in Canada. “The mix of analog and digital technologies,” he said, “is indicative of how scientific knowledge emerges from the hybridity of things. Alexander Graham Bell would approve.”

“The emotional component of the human element is strong,” noted Juror Yael Fitzpatrick, design and branding manager at American Geophysical Union. “We want to know what the woman [in the photo] is thinking. And the injection of a bit of humor from the Starship Enterprise at the top of the frame is a lovely counterpart to the serious tone elsewhere.”

Elena Bylinskaia, an accelerator operator at TRIUMF for over ten years, is the woman featured in Mackenzie’s photo. “I am glad to work in a strong team of operators,” said Bylinskaia. “This job is very diverse and challenging.”

Second Place in the Jury Category is awarded to Mark Killmer’s photograph (see below) of the temporary laboratory set up in Australia’s Stawell Underground Physics Laboratory. 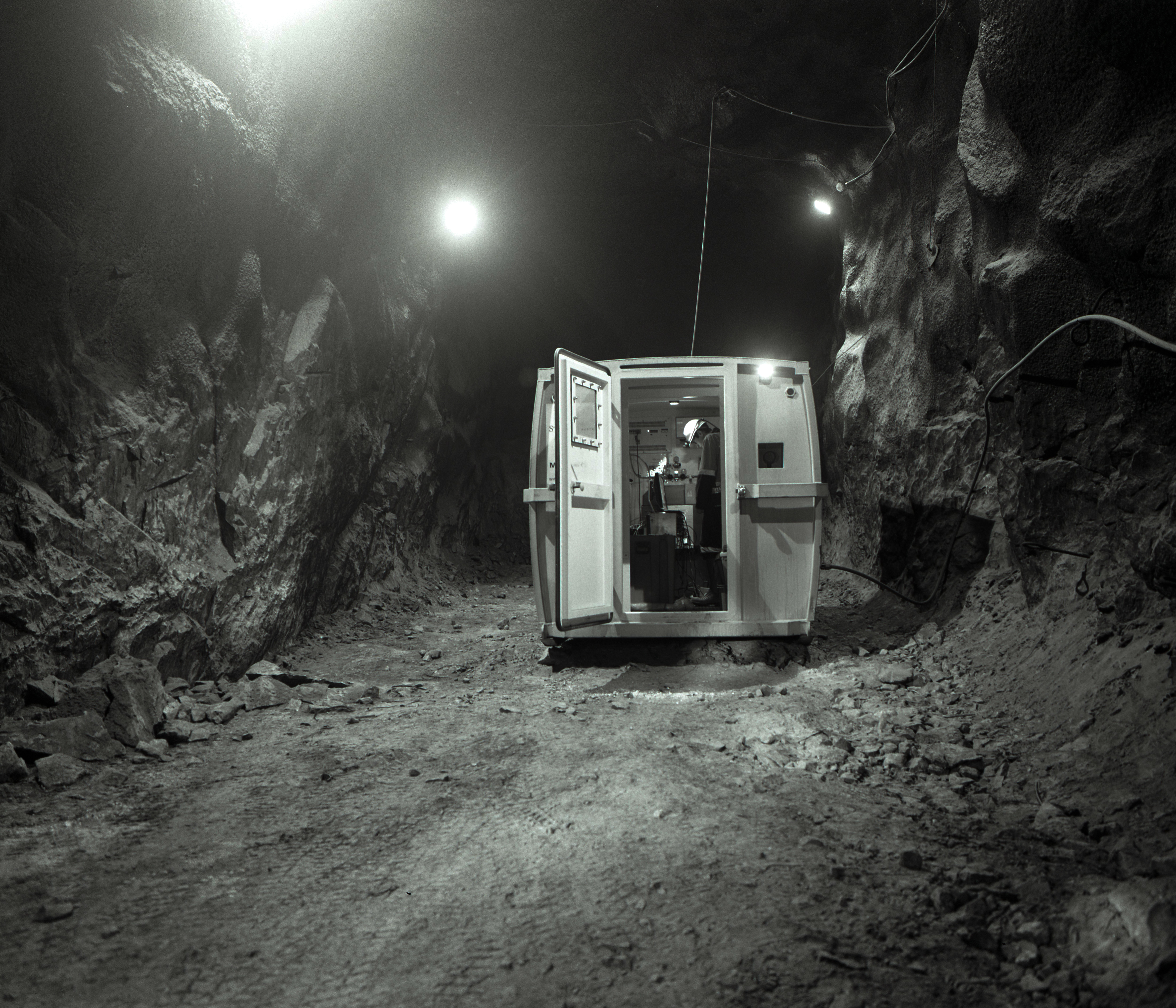 Third Place is awarded to Robert Hradil’s photo, The Incredibles. The photo (see below), taken in the CERN restaurant, spontaneously captures the knowledge transfer between the past, present, and future. 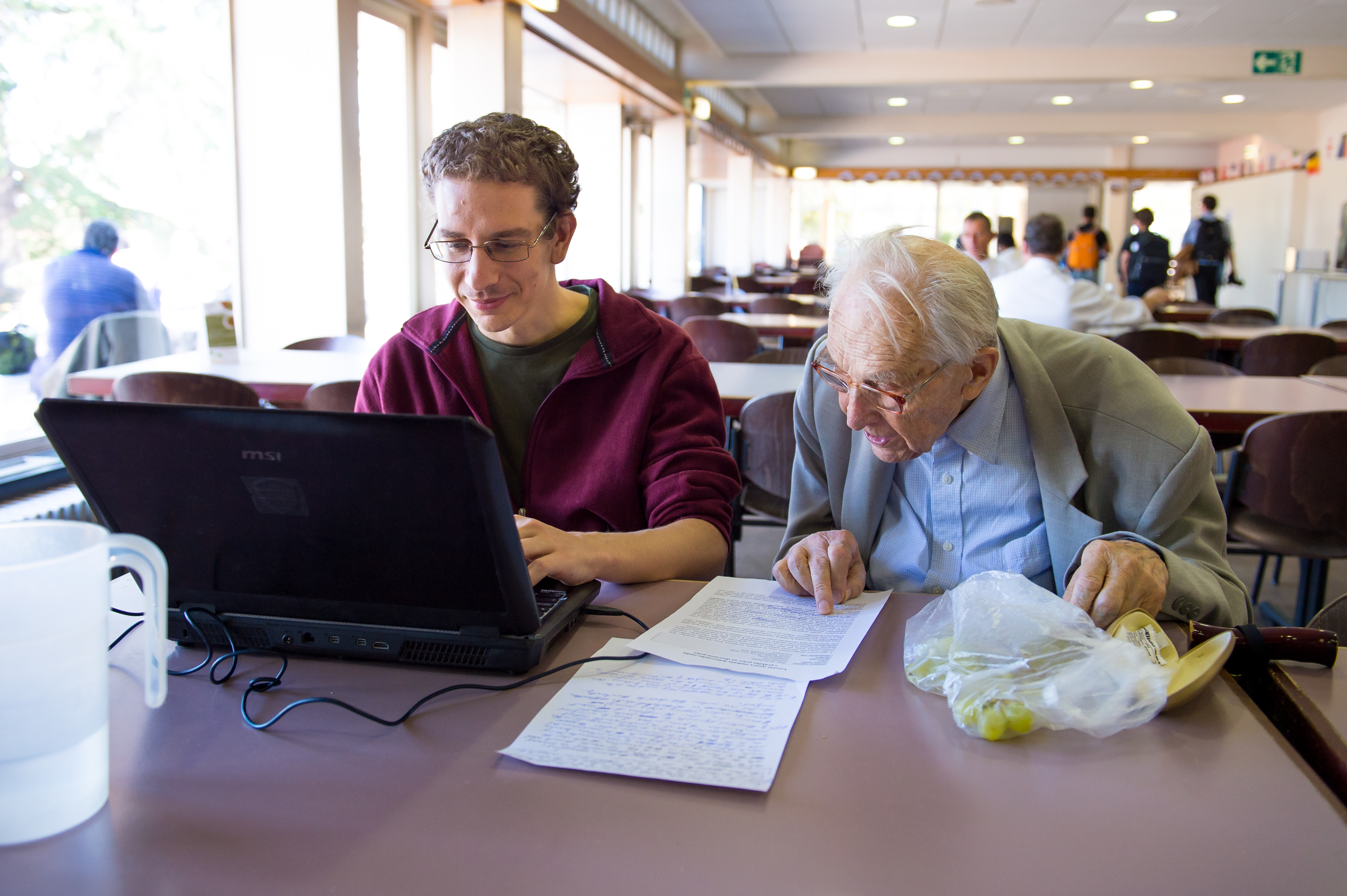 In the People’s Choice Category, over 3,800 online votes were cast to determine the winners.

The winning photos from both the Jury and People's Choice categories can be viewed along with more information about the competition’s judges at interactions.org. Photographs will be featured in symmetry magazine, in the CERN Courier, and as part of a travelling exhibit across laboratories in Australia, Asia, Europe, and North America.

Congratulations to the winning photographers!

Robert Bean is an artist, writer and curator living in Halifax, Nova Scotia, Canada. He is a Professor at NSCAD University. Bean has edited books and published articles on photography, contemporary art and cultural history. He is a contributor to the Cineflux Research Group at Nova Scotia College of Art and Design University and the Narratives in Space and Time art and mobility project. Bean was the Artist in Residence at the Canada Science and Technology Museum, Ottawa, in 2010. In 2014, Bean curated the exhibition “Stan Douglas Photographs” shown at the Ryerson Image Centre in conjunction with the Scotiabank Photography Award. Bean's artwork is in public and private collections, including the National Gallery of Canada, the Art Gallery of Nova Scotia, ZKM (Zentrum für Kunst und Medientechnologie) Karlsruhe, Germany and the Donovan Collection, University of St. Michael’s College, Toronto. http://nscad.ca/en/home/academicprograms/mediaarts/faculty/robert-bean.aspx

Yael Fitzpatrick is the Design and Branding Manager at American Geophysical Union, the world's largest organization of Earth and space scientists based in Washington, DC. Fitzpatrick brings more than 25 years of design and management experience as a former Art Director and publications professional, including 18 years in scholarly publishing and communication, most recently at Science. Fitzpatrick has extensive experience with journals, magazines, and books in print and online, and expertise in content ranging from general daily news to highly technical academic research.  www.yaelfitzpatrick.com/

Dr. Joe Hanson is a biologist, science writer, and the creator and host of PBS Digital Studios’ science education series It’s Okay To Be Smart, which takes a fun-loving look at the world of science through the lens of pop culture, art, and comedy.  Joe’s award-winning writing has been published in WIRED, Nautilus, ScientificAmerican.com, and It’s Okay To Be Smart has been nominated for IAWTV and Streamy Awards for excellence in online video. youtube.com/itsokaytobesmart and itsokaytobesmart.com

Keibun Miyamoto is a photographer, film director, and novelist. Miyamoto was born in Saitama Prefecture Urawa, Japan, and attended the Nihon University - College of Art, and the New York School of Visual Arts. He worked in New York for several years and later returned to Japan. Miyamoto’s photography portfolio ranges from advertising clients, to magazines and editorials, to television and film. http://whiskystudio.net/

Jan Peters is a documentary filmmaker specializing in Super 8 from Berlin. Born in Hanover, he studied at the University of Fine Arts in Hamburg and in 1994, co-founded Abbildungszentrum, the filmmakers' collective. Peters is a radio play author and video artist. He is particularly known for his playful and experimental use of accident and imperfection to emphasize the film as a medium as well as his exploration of the dynamic between narrator and audience. Peters masterfully interweaves a documentary style with unexpected elements such as satire, monologue performances, and forays into fiction, yet his oeuvre is constantly growing more diverse in style and content. Peters was awarded the Collide@CERN Geneva Award Winner in 2013. http://arts.web.cern.ch/jan-peters

– Taken from a TRIUMF press release