TRIUMF is pleased to share that TRIUMF Researcher Emeritus Vijay Verma has been awarded the prestigious Hind Rattan award. The award (the ‘Jewel of India’) recognizes achievement by diasporic citizens of India and is considered the highest honour given to non-resident persons of Indian origin. Verma, who is also an accomplished author and speaker, is being recognized for his outstanding services, achievements and contributions within the fields of project management and engineering. 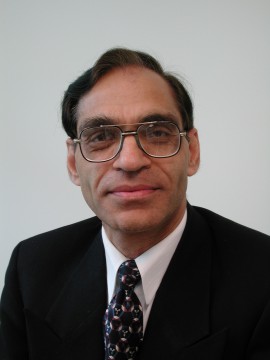 Verma began his career at TRIUMF in 1973, serving as an electrical engineer with the Magnet Power Supplies and Beam Lines groups and later as Group Leader of the Planning Department. Throughout his TRIUMF career, Verma also achieved positions as the Vice President and President of the West Coast chapter of the Project Management Institute. He is also the author of four books on project management and has written or contributed to numerous papers.

"I was very excited and happy when I was selected for this award out of so many non-resident Indians,” said Verma. Asked about highlights from his career at TRIUMF, Verma said "Working with TRIUMF’s diverse community of scientists, engineers, technicians, and staff has always been a delight, and almost doesn’t feel like work! The level of cooperation and commitment from everyone at the lab is always incredible, and I truly appreciate how everyone gives their best performance (and more!), especially when a crucial goal requires it.”

Verma adds the Hind Rattan award to a long and growing list of recognitions and accomplishments from across his career, including several awards from the PMI. He will receive the award at a special ceremony scheduled for January 25th, 2020, in Delhi, India.

On behalf of the TRIUMF community: Thank you for your decades of contributions to the lab and congratulations on the well-deserved award, Vijay!