“A science podcast, but with a twist”: TRIUMF’s Coffee Break Podcast highlights stories from the diverse people behind the lab 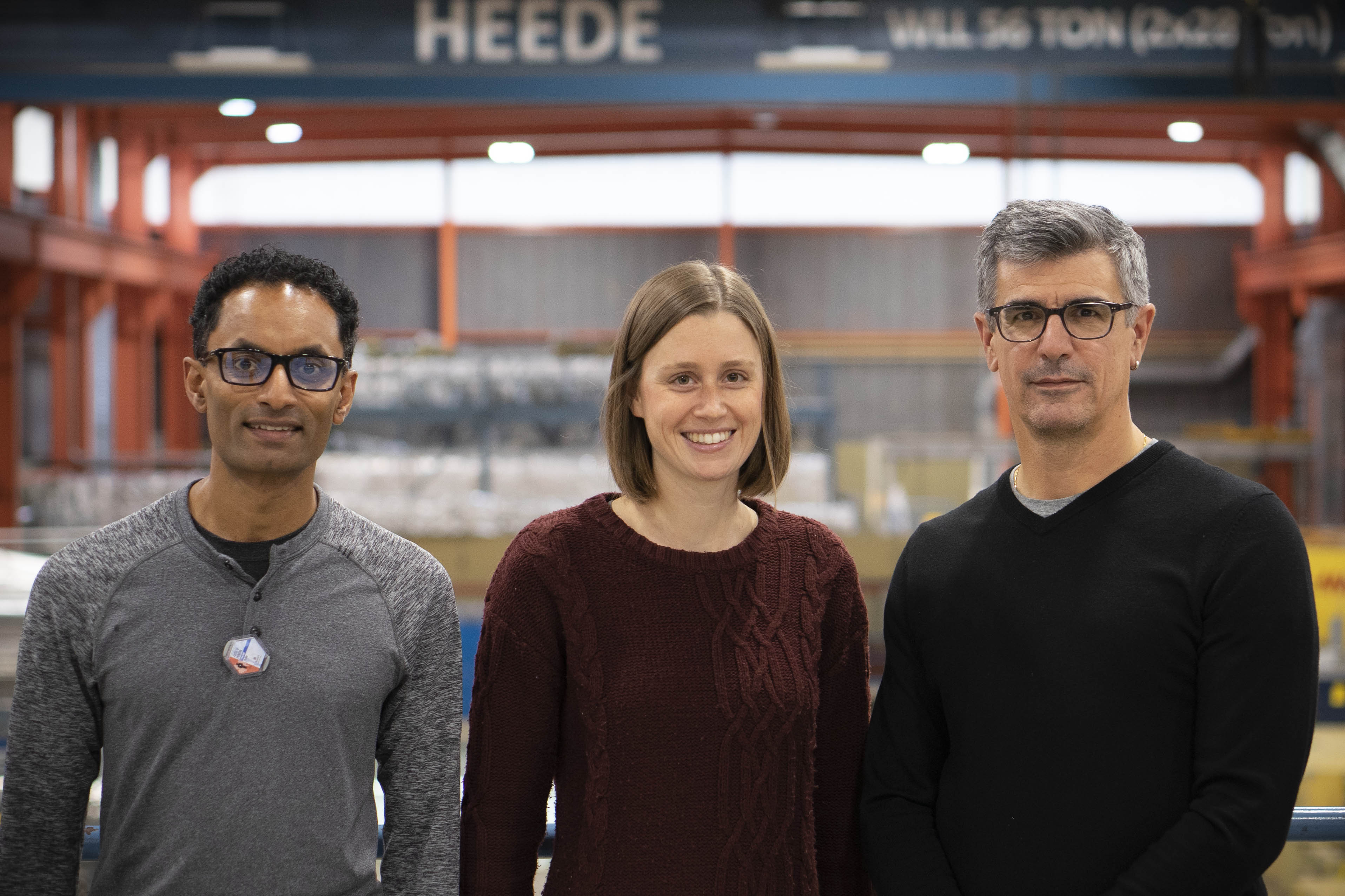 Creating a science podcast: it had always been a dream for Dr. Pietro Giampa. Now, with the support of the TRIUMF Community Fund, he’s using podcasts to not only explore the wonder of science, but also to share the personal stories of the many people at TRIUMF.

“I’d had this vision of making a science podcast since 2013, back when I was working at SNOLAB for my Ph.D.,” said Giampa, a postdoctoral researcher now studying dark matter at TRIUMF and the recipient of the Otto Häusser Postdoctoral Fellowship. “There, I'd talk with people from all over the world with such unique experiences, and there were so many stories that I thought would be perfect for a podcast.” He noted that while many science podcasts exist, most focus on scientific discoveries and less on the people who help make these discoveries, leading to his idea for the TRIUMF Coffee Break Podcast.

Described as “a science podcast, but with a twist”, each episode of the TRIUMF Coffee Break Podcast features a casual conversation between podcast host Giampa and a member of the TRIUMF community. In the spirit of the oft-insightful discussions that emerge over a cup of coffee, they chat about anything from the interviewee’s work at the facility and role in the community, to what led them to TRIUMF, to what sparked their interest in science, technology, and related work in the first place. The podcast aims not only to share the wonder of science and the scientific journey, but also to provide a unique, behind-the-scenes perspective of TRIUMF through the stories of the diverse people working at the lab.

The podcast also marks the first public-facing project from the TRIUMF Community Fund, an initiative from TRIUMF’s Equity, Diversity, and Inclusion (EDI) Committee. The fund, which launched last year, was established to support projects that continue to advance a culture of equity, diversity, and inclusion at TRIUMF, in accordance with the organization’s values.

“Once the TRIUMF Community Fund came about, it was absolutely perfect for the podcast because we could tell the same stories but with an extra necessary flavour,” Giampa said. “Having a wide range of people talk about their stories and science behind the microphone was definitely a strong motivation for me to push this out.”

Ian Doyle, Director of Human Resources at TRIUMF and EDI Committee co-chair, likewise emphasized the importance of the Community Fund in supporting the lab’s EDI efforts. “As an organization, we need to integrate EDI goals and objectives into our people programs and the work we do here,” Doyle said. “The EDI Committee works towards this, and the Community Fund in particular demonstrates TRIUMF’s commitment to supporting its values and community members.” 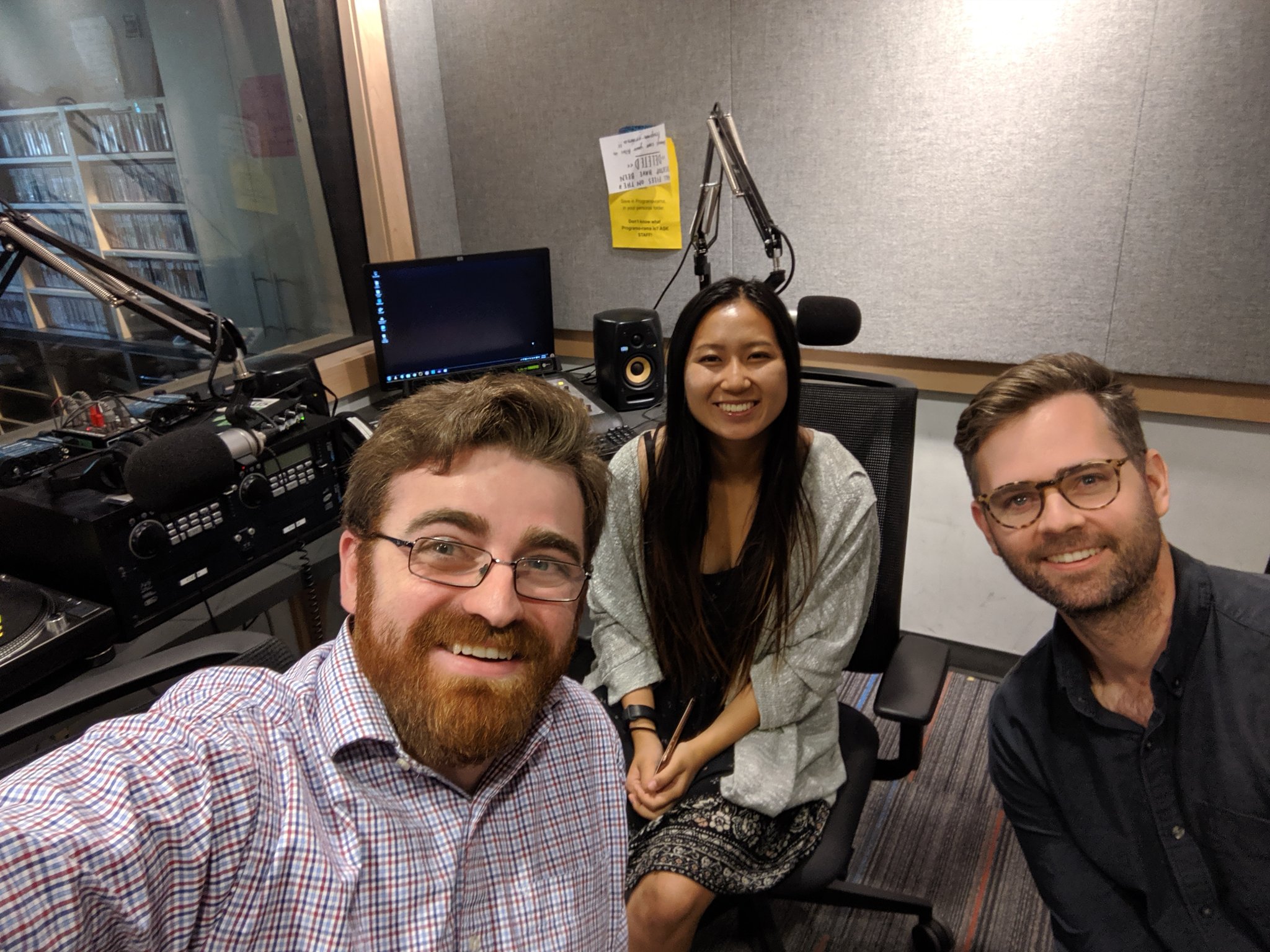 (A behind-the-scenes photo of some members from the podcast production team at the recording studio; from left to right: Pietro Giampa, Katie Hoang, and Stu Shepherd. Credit: Pietro Giampa)

“Pietro’s endeavour spoke to the spirit of equity, diversity, and inclusion: understanding people from all angles. Through that understanding, we can appreciate the value of people’s different perspectives, we can work better, and we can truly become a community wherein each member strives for and achieves their best,” said Dr. Ania Kwiatkowski, a research scientist at TRIUMF and EDI Committee co-chair. “In his own way, Pietro is improving TRIUMF just as anyone can do.”

“TRIUMF's ongoing commitment to visibility, understanding, pride and support for our diverse communities demonstrates the way we strive for continuous improvement,” added Grace Wong Sneddon, an external consultant on the EDI Committee. “The integration of EDI with our science and research will enrich and strengthen each of us, contribute to our inclusive laboratory and continue to make TRIUMF a workplace of choice.”

One thing Giampa wanted to emphasize in the podcast is that science is diverse, with infinite paths leading to science, regardless of whether you become a scientist yourself or contribute in some other way. This is reflected in the stories of the various interviewees, many of whom did not set out to enter the world of physics: Robin Hayes, graduate student in the ATLAS group at TRIUMF and UBC, had focused on an undergraduate chemistry degree; ARIEL Project Engineer Asita Perera was drawn into engineering from his love of cars and design; and Dr. Marcello Pavan, now Head of Academic Programs at TRIUMF, ended up in science by constantly chasing the question “Why?”

“I find that the personal path each individual takes to science is so underappreciated,” Giampa said. “Even if you don't end up strictly as an academic researcher, you can still be a leading contributor to science and innovation, like being an educator or working in industry. People often get the misleading impression that there is only one way into science and that scientists work alone, so I feel it’s important to recognize that science is a community effort and that everyone has a role to play.”

A podcast like this can do both good inside and outside of TRIUMF, Giampa explained. Interviewees can share their work with their colleagues, who in turn can learn about and connect with other TRIUMF community members. At the same time, listeners from the public can learn about TRIUMF through the meaningful and impactful medium of the podcast, which makes the science easily accessible, particularly to younger audiences.

“Ultimately, I hope listeners – especially the younger folks out there – get the message that science and physics are really cool, and that there’s no single formula to get here,” said Giampa. “Make your own path into science – whatever it is, you’ll have fun and make a great contribution to the world.”