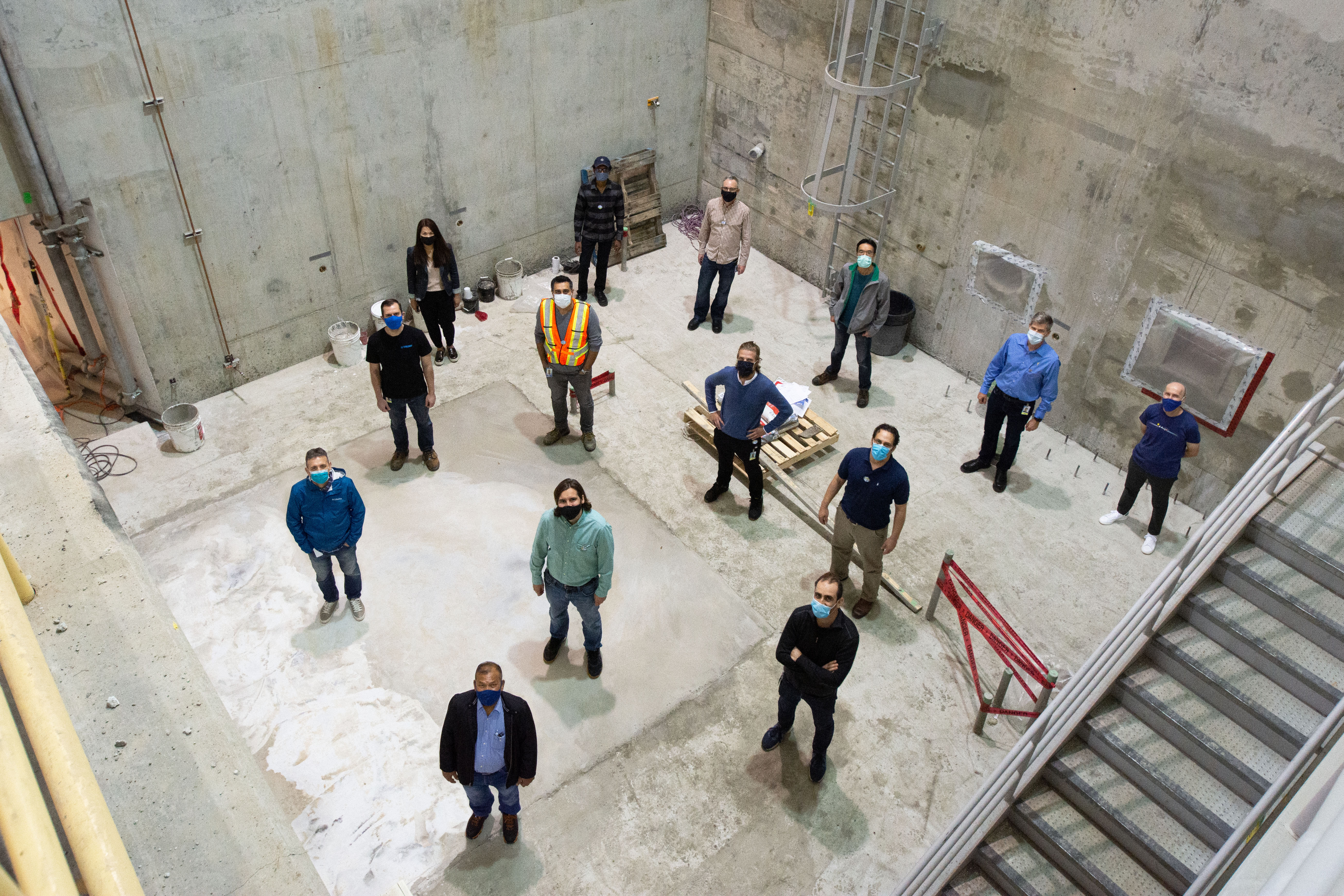 In a significant step forward for work on TRIUMF’s Advanced Rare Isotope Laboratory (ARIEL), the laboratory’s design, engineering and construction teams are pleased to announce that the first level (L1) of the ARIEL Target Pit Shielding project has been completed.

As the bottom-most stratum of radiation shielding surrounding ARIEL’s two new target stations, the L1 layer is a critical element of the full shielding paradigm. It functions both to structurally support subsequent layers while reducing the neutron flux (radiation) generated to within the regulatory requirements. The two stations will house the two-part heart of ARIEL’s isotope production capacity, the ARIEL Proton Target West (APTW) and ARIEL Electron Target East (AETE). 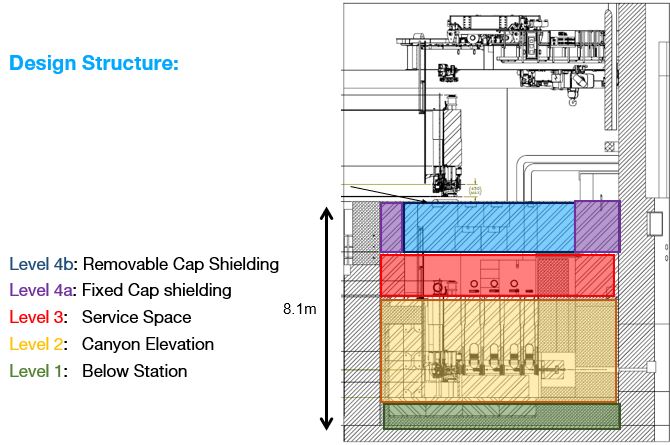 “The completion of the L1 base layer is an important milestone in the construction of the full complement of target pit shielding and the long-term progress for ARIEL” said Bill Paley, Senior Mechanical Engineer, Targets and Ion Sources and leader of the ARIEL target hall infrastructure project.

“The design for the L1 layer began as far back as 2012,” said Paley. “We had to consider the entire shielding envelope as one unit, despite the unique characteristics of each level, and design the shielding in parallel with the target stations. The shielding design was driven by iterative FLUKA simulation and CAD modelling, most recently by Ricardo dos Santos Augusto, while adapting to updates to the station designs along the way.”

From the start of construction, the engineering design team was in constant contact with construction teams to quickly address unforeseen hiccups and seize opportunities for optimization in the execution of the build. Part of this capacity was a product of the paradigm that the ARIEL team adopted with its contractors.

“The initial bids for the mechanical and concrete work package were higher than forecast, for a variety of reasons, which led us to reimagine a hybrid model for project management roles for the L1 layer,” explained Navid Zolfaghari, Project Manager, Facilities. “Further, there are a lot of unknowns with a project of this size and complexity, which inevitably result in required changes as construction progresses. With TRIUMF staff taking on some of the supervisory capacity for the construction, we were able to facilitate communication and streamline the process for conveying and realizing design and engineering updates in a timely manner. Adrian Watt, Dragan Mitrovic, Allon Messenberg, Bill Paley, and a number of our [engineering and project management] colleagues contributed to ensuring there were no pauses in the job from start to finish, and this was one of the reasons we were able to significantly reduce the project budget and stay within the timeline.”

The L1 layer includes drain and ventilation lines embedded in concrete that will remain entirely inaccessible throughout the life of the facility.

“Now that those embedded service lines are in there, it will be almost impossible to service them beyond an internal cleaning without a tremendous effort,” said Paley. “We had to be particularly careful about processes like welding and installation to ensure that the lines would last, and I’m grateful to my [engineering] colleagues Adrian Watt and Trian Groumoutis for their work to make that happen. Whereas the target stations themselves were designed with an approximate 30-year life span before major maintenance or replacement, we designed the L1 services for a 60+-year span.” 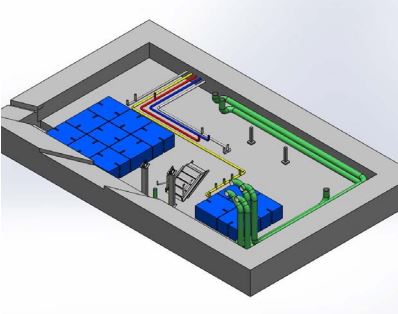 (Image: The Target Hall pit L1 shielding blocks (blue), which sit at the base of the two target stations [credit: Zlatko Bjelic]) 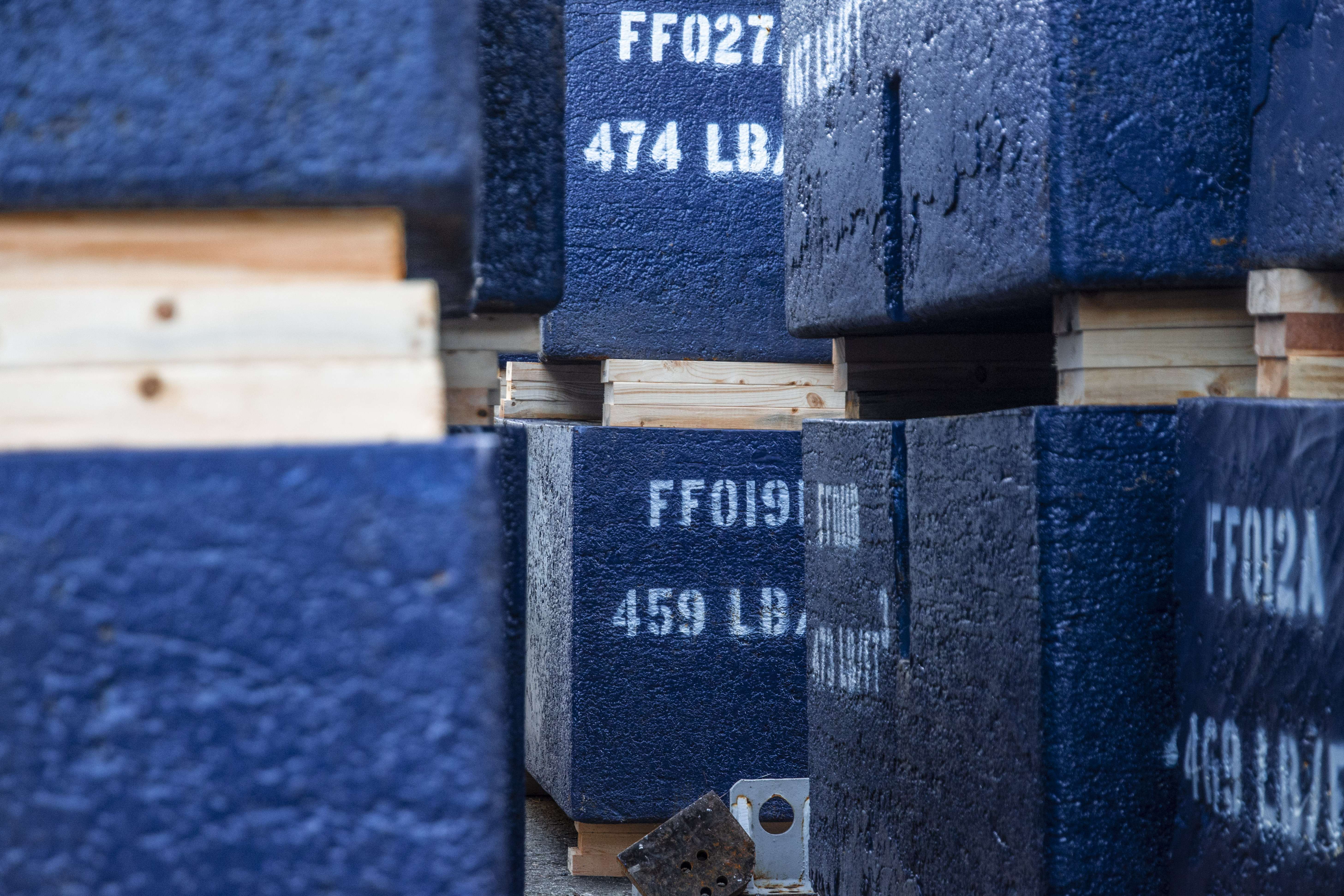 The L1 shielding comprises 13 nine-ton blocks of steel shielding, four for the base of the AETE and nine for the base of APTW, set within a layer of highly specialized ‘neutron hungry’ boron-infused concrete – a highly specialized material that posed additional challenges to the process, said Zolfaghari. “Building on FLUKA simulations performed by Ricardo dos Santos Augusto, we had a good understanding of how much shielding capacity this borated concrete could provide,” said Zolfaghari. “Procuring that concrete turned out to be a bit more of an involved process.” 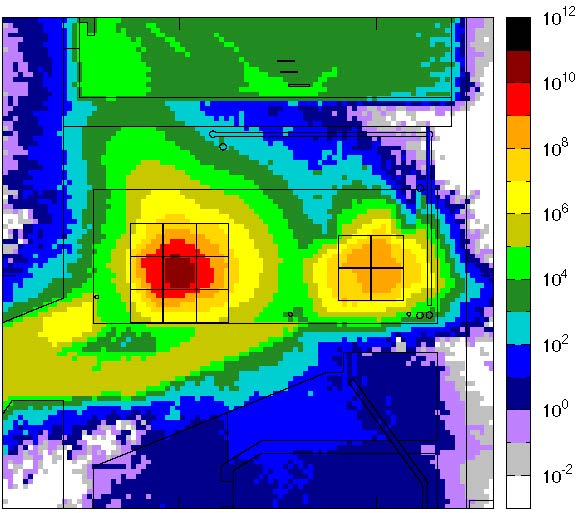 Realizing an opportunity to reduce the budget by a significant margin, the team sourced the necessary boron carbide mix from an American supplier and had it shipped to a local concrete manufacturer in Vancouver where it could be incorporated into conventional concrete. However, while borated concrete is a reliable and well-studied substance in use as radiation shielding at nuclear facilities around the world, few resources exist for mixing your own from scratch. “I actually went to the concrete mixing facility to supervise the mixing of a test batch of our TRIUMF ‘recipe’ for borated concrete” said Zolfaghari. “To make sure we had accounted for all the variables, we even did a trial run where we loaded up a small amount of the borated concrete into a truck, drove it out to TRIUMF, passed through Stores, and set up outside ARIEL, all to ensure that the various factors related to mixing, timing, and pour dynamics would be optimized when we did the full deliveries. 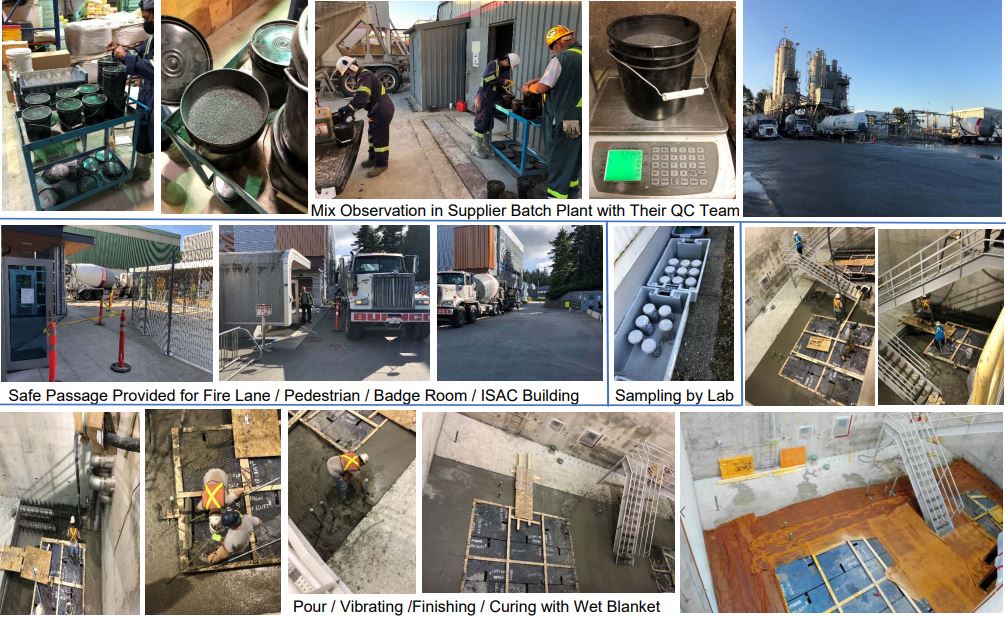 (Image: A collage of images, including the creation of borated concrete [credit: Navid Zolfaghari])

Then, the ARIEL team struck a worrisome roadblock: a follow-up chemical composition test performed by the concrete manufacturer indicated that the test batch of borated concrete did not contain enough boron, which would reduce its shielding performance. A second test of the same sample by another lab detected the expected boron content, contradicting the first result. To make sense of the contradictory results, the team consulted TRIUMF chemist John Wong and Alex Gottberg, Department Head, Targets & Ion Sources, who were able to explain reasons for the negative result likely being erroneous. Follow-up quality control checks confirmed the positive result, the concrete manufacturing was able to resume, and the construction team could continue with confidence.

“It was an interesting side-story, very emblematic of the nature of TRIUMF,” said Zolfaghari, with a smile. “We are tremendously fortunate to have so much in-house expertise here at the lab, and we certainly benefitted from that in ensuring the chemical composition of this critical element of the shielding project.” 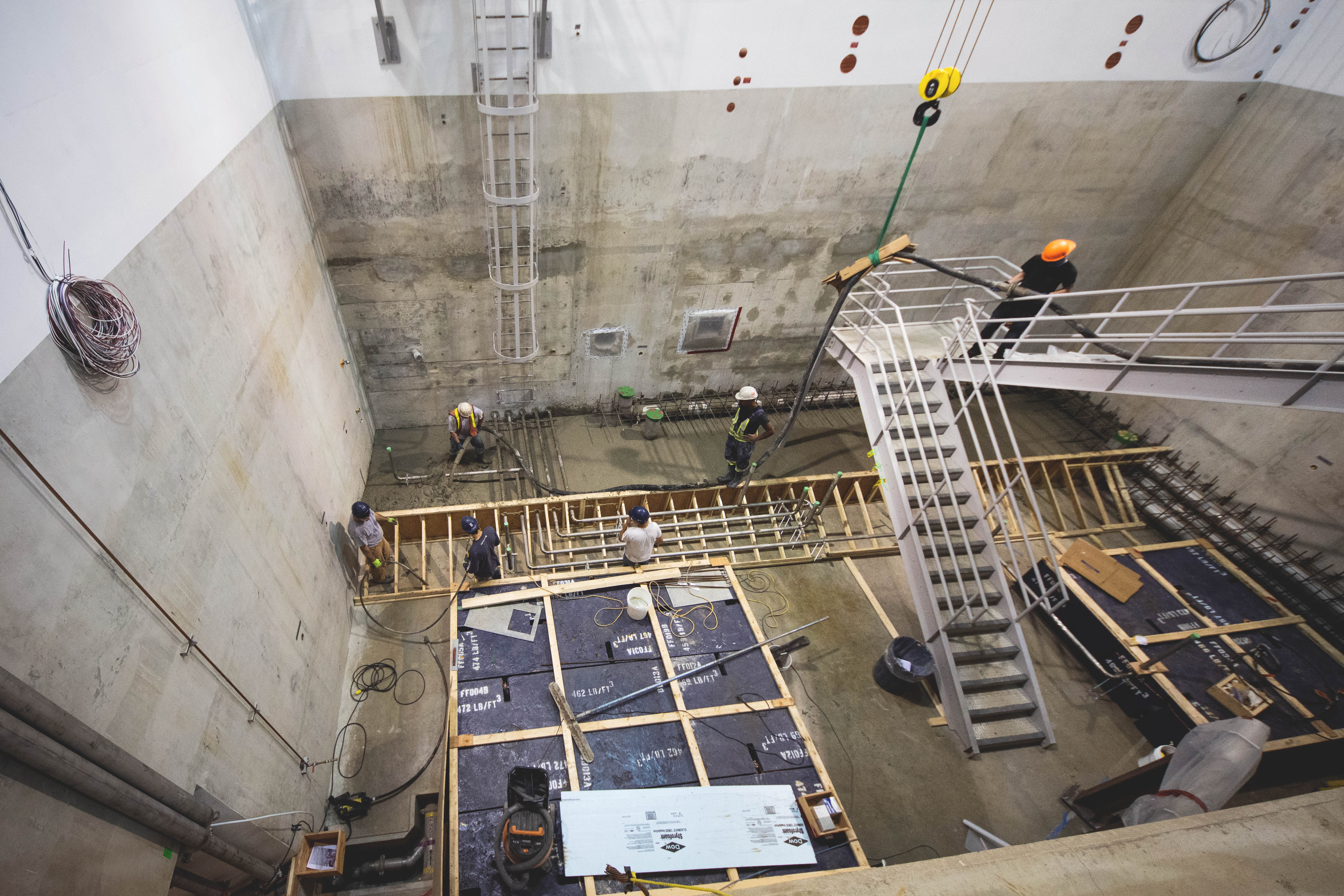 Paley and Zolfaghari credited the TRIUMF teams for accomplishing the L1 shielding project on-time and under the forecast cost, despite the many challenges of working in a confined space in accordance with pandemic-related health protocols, including additional PPE/masks and social/physical distancing. “There were so many instances where I was struck by how well our teams were working together, despite the challenges of COVID-19,” said Zolfaghari. “It had a significant impact on our day-to-day operations, from materials handling to installation to physical distancing for TRIUMF personnel and contractors. Everyone respected the procedures and followed the rules, and generally worked seamlessly across the various groups in the area.” With construction work now underway on the Module Storage Pit, the ARIEL teams already have their sights set on the next series of milestones, including the next layer of concrete scheduled to start in November. Still, the importance of reflecting on the achievement of the L1 shielding project completion remains top-of-mind for Zolfaghari, Paley and others.

“In a way, the L1 shielding is the first part of the major component installed in the ARIEL Target Hall, aside from the infrastructure of the building itself or the crane.” said Paley. “To finally see our work coming to fruition and to see the build progress is truly satisfying. It really makes the project feel real, and it’s good for everyone involved to see progress.”

Congratulations to the ARIEL teams!