The control room from which TRIUMF’s Applied Technology Group (ATG) operates their three cyclotrons is one of those unexpectedly inspiring places on the TRIUMF site. The room is awash in natural light; a lively golden pothos vine radiates from its home pot in one corner, forming a sprawling green canopy across the entire ceiling. The control room is the nerve center of ATG commercial isotope production facility, which neighbours Pacific Spirit Regional Park at TRIUMF’s eastern border.

The 30-strong team of highly qualified technicians, engineers and operators ensures the prompt delivery of these critical medical isotopes – staple substances in the diagnosis and treatment of diseases that affect people around the world. These isotopes are a direct product of the longstanding commercial partnership between TRIUMF and BWXT, and 40 year-long track record of excellence in nuclear medicine.

A history of technological achievement

In the early years, ATG’s primary responsibility was the manufacture of commercial-use radioisotopes using TRIUMF’s 520 MeV cyclotron. These isotopes, including germanium and strontium , were crucial to the burgeoning field of nuclear medicine research and the widespread development of diagnostic imaging agents (or ‘radiotracers’) occurring during that time. The two organizations also established expertise in developing target and isotope production technology – work that continues to be an important area of collaboration in the relationship between TRIUMF and BWXT. 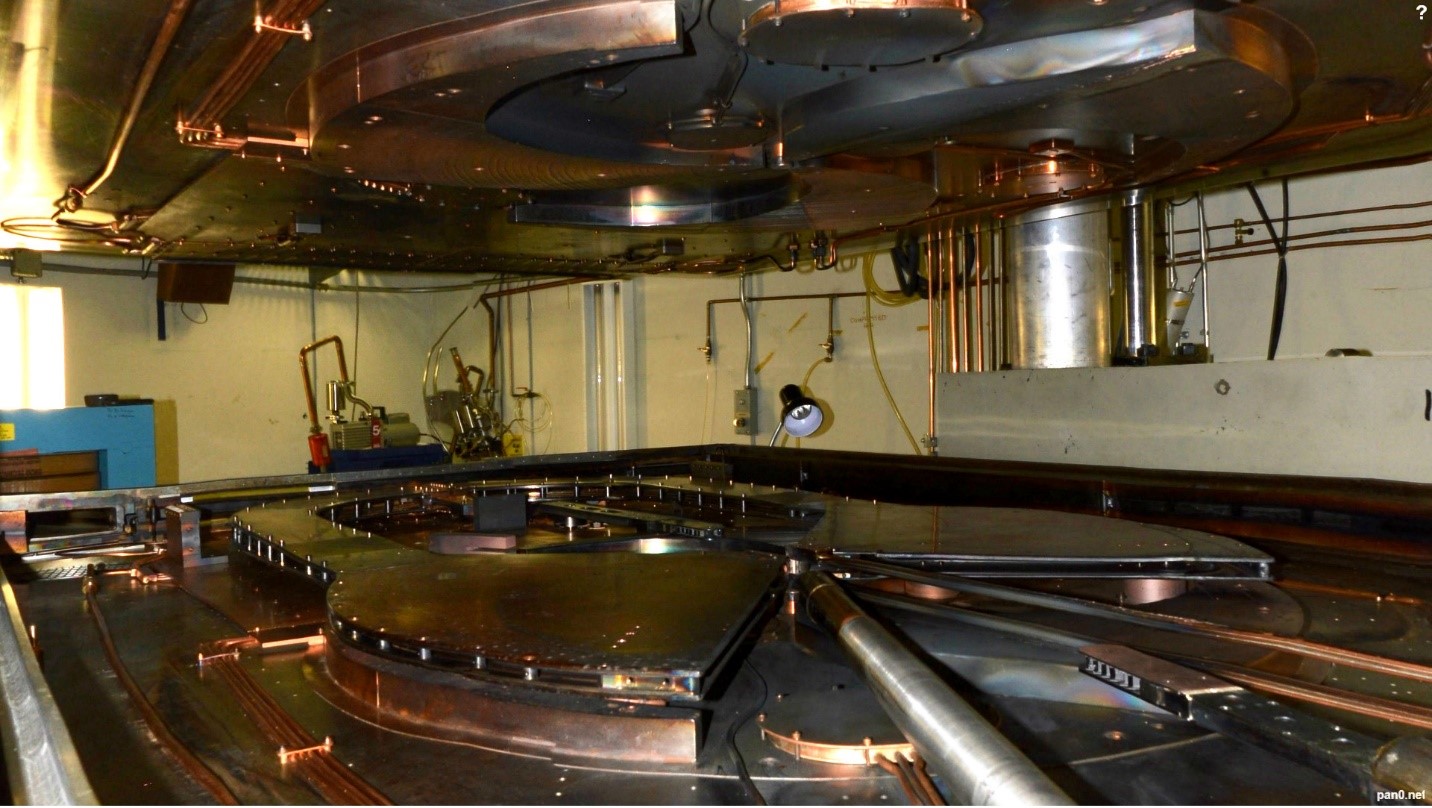 <image: inside the CP42 cyclotron>

The year 1982 marked the beginning of a new era for nuclear medicine in the lab, with the first irradiations of thallium using a dedicated cyclotron for medical isotopes production. This new cyclotron, the CP42, was manufactured by the Cyclotron Corporation in Berkeley, California. The CP42 significantly bolstered ATG’s production capacity and enabled the manufacture of isotopes like iodine, indium, cobalt, and gallium to supplement the species produced using beam from the 520 MeV cyclotron.

ATG also produced the first isotopes used by TRIUMF’s historic PET Group (which was later rolled up into what is now TRIUMF’s Life Sciences Division) to create radiotracers, and contributed to the construction of the first TRIUMF PET scanner, which was completed in 1982.

Collaboration between ATG and the TRIUMF PET group contributed to the expansion of TRIUMF’s commercial isotope production capacity and eventually allowed TRIUMF to produce many other isotopes. Since then, ATG has continued to adapt and contribute to the progress for isotope production at TRIUMF, including developing and irradiating new targets (molybdenum and thorium, for example).

Global advances in nuclear medicine drove commercial demand for isotopes and prompted the addition of ATG’s second (TR30-1) and third cyclotrons (TR30-2) in 1990 and 2002, respectively. These two new machines dramatically increased the quantity of commercial isotopes that ATG could produce and also helped the group develop infrastructure to produce new species like palladium-103 (which is used for brachytherapy). 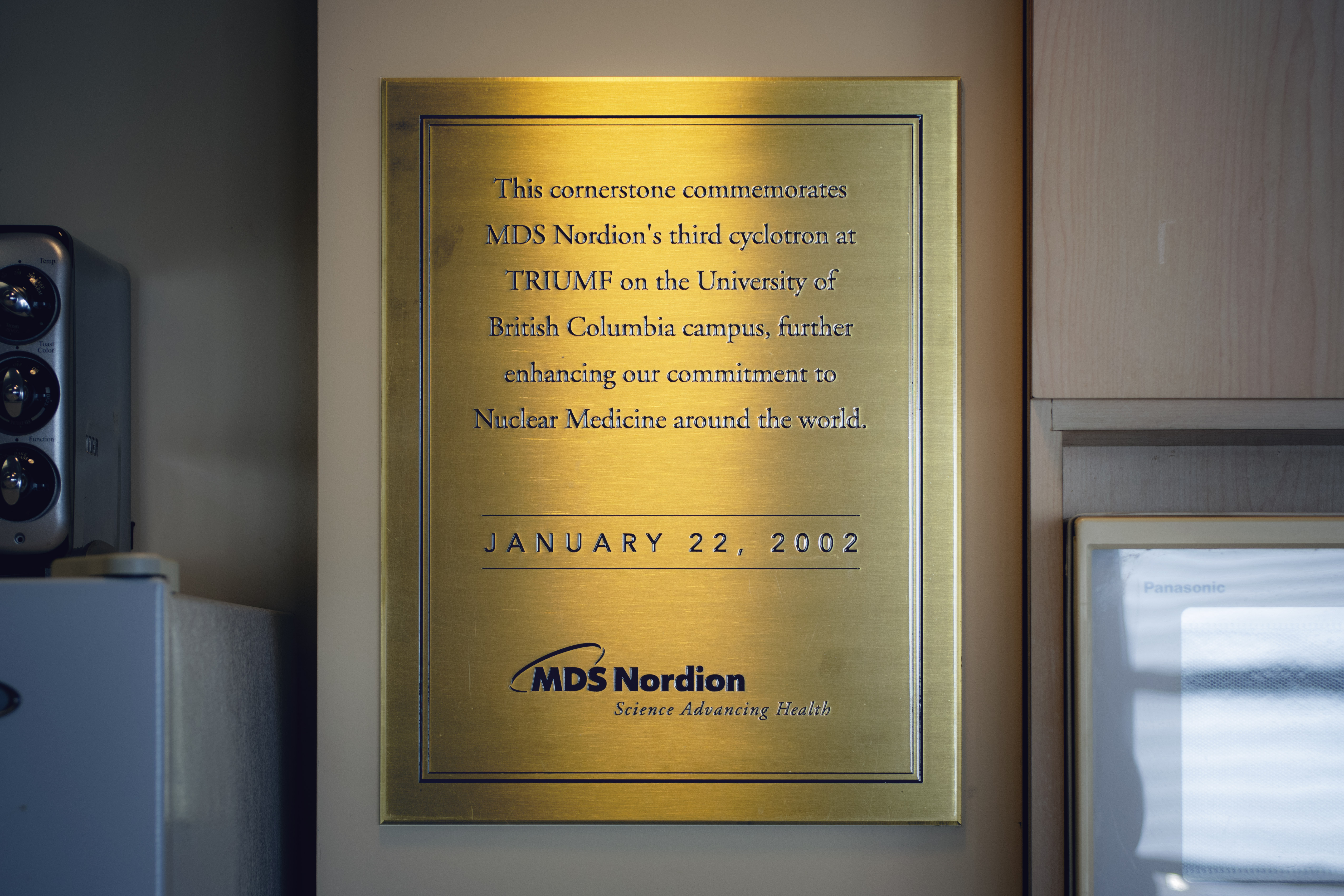 The TR30-1 was the product of an intense collaboration between TRIUMF and EBCO, a company that has a long history of cooperation and technology transfer with the lab. From TRIUMF’s partnership with EBCO came Advanced Cyclotron Systems (ACSI), one of the lab’s first major technology transfer success stories. In large part due to the prototypes and technology developed at TRIUMF, ACSI became a world leader in the manufacture of commercial, high-output medical cyclotrons. Building on this expertise, ASCI has built and installed over fifty ‘TR’ (TRIUMF)-type cyclotrons across the globe, each enabling reliable and efficient production of critical medical isotopes.

Within the dedicated facility where ATG works, not far from TRIUMF’s 520 MeV cyclotron, the BWXT cyclotrons and their production target stations are housed in underground radiation shielding vaults and caves.

In a typical week, ATG’s skilled operators, technicians and engineers produce approximately 35,000 patient-doses of different medical isotopes. The production of these isotopes is the first link in a complicated global network of radioisotope supply and distribution. It is a feat of logistics made all the more complex by its primary constraint: time. 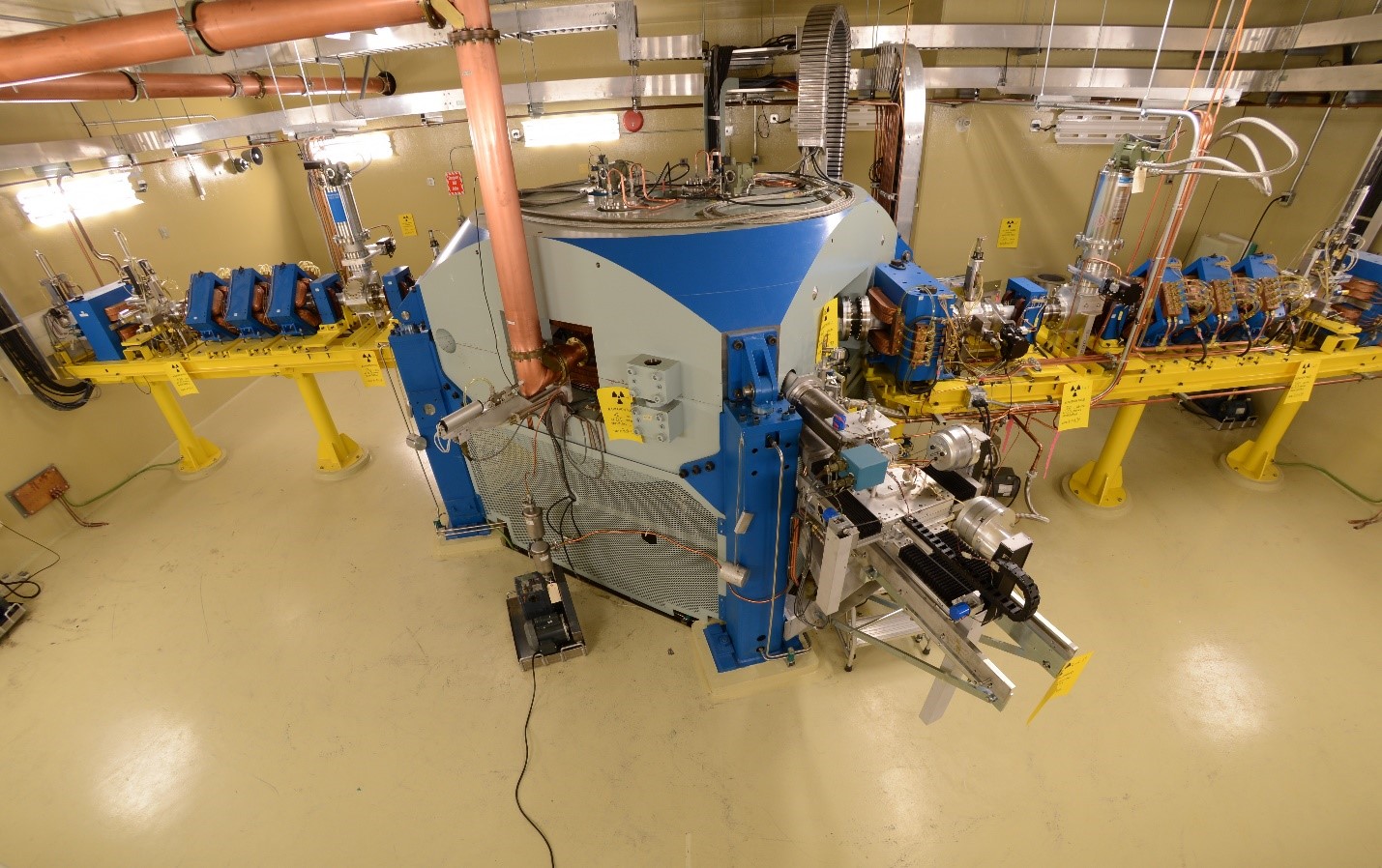 Each isotope species produced by ATG at TRIUMF has a discrete half-life and decay pathway. The desired isotopes must be processed, transported, and administrated before radioactive decay transforms them into other species. Manufacturers count down mere hours before the radioisotope has decayed into ineffective products.

Without a particle accelerator or a nuclear reactor within transport range of an isotope’s useful life, hospitals in remote or isolated areas have limited options for taking advantage of nuclear medicine techniques. These factors, combined with the safety considerations involved in processing and transporting radioactive substances across provincial and international borders, make for an overall process that requires expertise, precision, and carefully coordinated shipping.

The union between ATG and BWXT provides both the capability and flexibility to support the world’s diverse isotope needs; while ATG manages standing orders for particular isotope species, they also have the flexibility and ability to meet rising demand for additional key isotopes (especially during shortages). This alliance acts as a stable source of medical radioisotopes that provides many hospitals across the globe with the means to improve the lives of tens of thousands of patients every week. What’s more, this commercial relationship has contributed over $80M CAD to TRIUMF’s operations (including almost $30M CAD in royalties) in the last 30 years.

“Isotopes like those produced at TRIUMF are critical tools for diagnosing and treating a variety of ailments from cardiac disease to Alzheimer’s,” said TRIUMF Director Dr. Jonathan Bagger. “With the expertise and tools within ATG, we are uniquely suited to provide a steady supply of these substances for the benefit of Canadians and people around the world.” 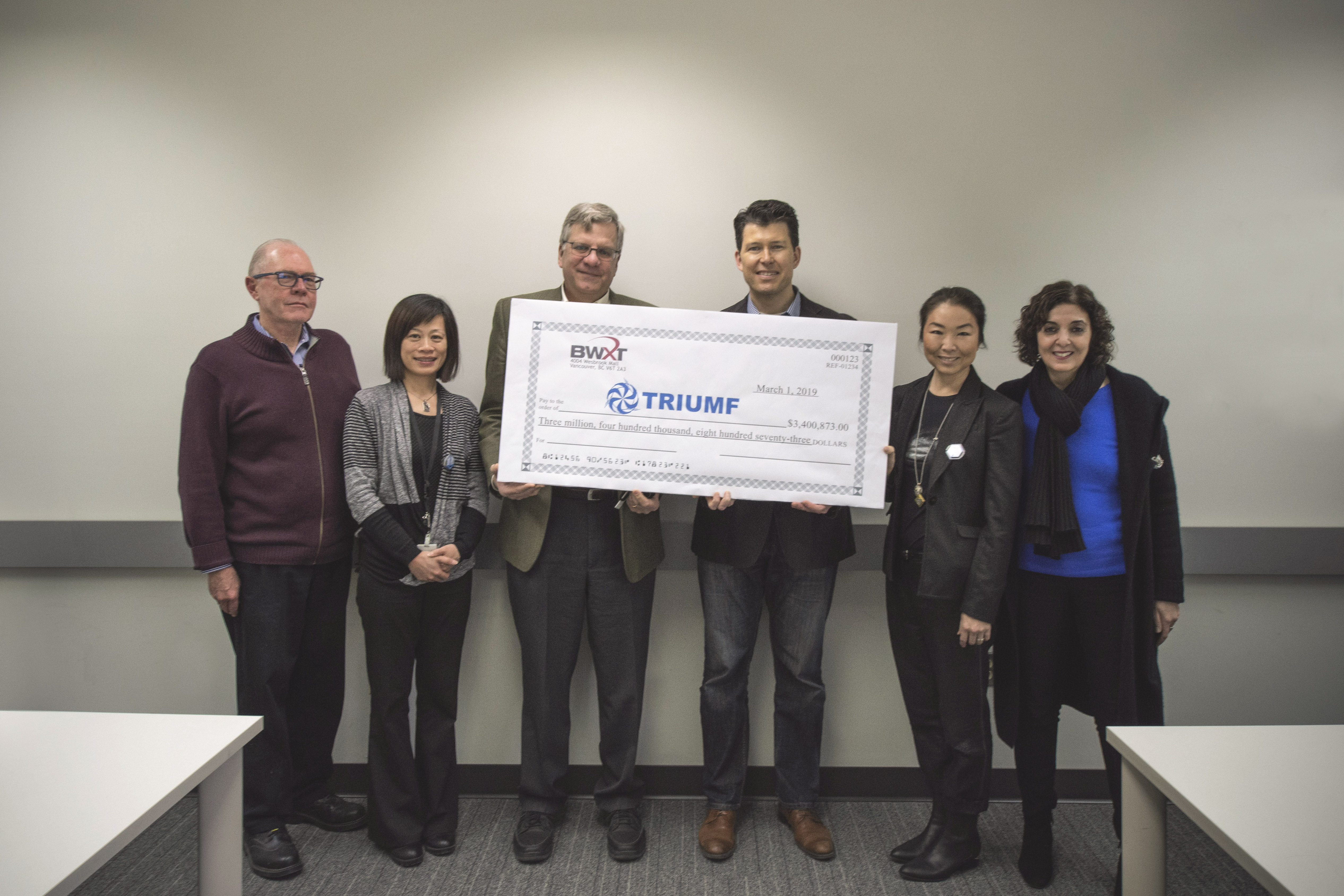 “In our 50 years as a premier physics lab and particle accelerator centre in Canada, TRIUMF has developed incredible expertise for trying to answer some of the most important questions about the universe,” said ATG Cyclotron Operations Group Leader Gabriel Cojocaru, “What is also remarkable is it’s sustained contribution, across more than 40 years, to the development and production of critical and life-saving medical isotopes.”

As we round the corner on TRIUMF’s 50th birthday, we also look back at one of its most important and enduring relationships and a team who has stewarded a critical contribution to the lab’s growth and success for over four decades. With 30 pairs of skilled hands, and with roots as deep as TRIUMF’s own, ATG has played a critical role both at the lab and in improving lives across the globe.

Here’s to 40 more years of success!

For more information on ACSI and the TR-type cyclotrons, please visit: http://www.ebco.com/about-us/advanced-cyclotron-systems/