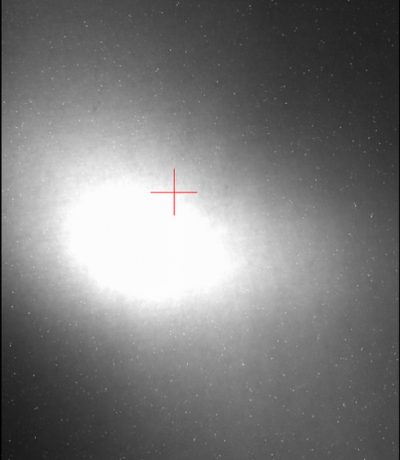 (Vancouver) – On September 30th, TRIUMF’s newly constructed superconducting electron linear accelerator (e-linac) produced its first particle beam at an initial energy of 23 MeV. The cutting-edge accelerator technology was designed and built in cooperation with institutions and industry across the country. Acceleration of first beam through the complete e-linac system culminates a series of recent successes for the Advanced Rare Isotope Laboratory (ARIEL) project and sets ARIEL on its path forward.

ARIEL is on track to become one of the most sophisticated rare-isotope facilities in the world. The successful completion of the project is a consequence of a remarkable collaboration between TRIUMF, Canadian industry, and 13 Canadian universities led by the University of Victoria. The project was jointly funded by the Government of British Columbia through the BC Knowledge Development Fund (BCKDF), the Government of Canada through the Canadian Foundation for Innovation (CFI), and the National Research Council Canada through TRIUMF and in-kind contributions.

“This is a tremendous accomplishment for these scientists, their teams, and for British Columbia,” said Minister of Technology, Innovation and Citizens’ Services Andrew Wilkinson. “Through cutting-edge research and innovation – like ARIEL – British Columbia is set to become a global leader in the field of superconductors and rare-isotope research.”

“This is a remarkable achievement,” said Dr. Gilles Patry, President and CEO of the CFI. “The technology developed at TRIUMF has the potential to open new avenues for a whole host of innovative products and applications in science and medicine that will benefit Canadians. Congratulations to the entire ARIEL and TRIUMF team!”

ARIEL’s e-linac is composed of many complex systems––including superconducting radiofrequency (SRF) accelerator cavities––whose thousands of components must work in concert at extreme tolerances in order to deliver beam successfully.

“It is breathtaking how quickly the e-linac came together! It’s a testament to the tremendous collaboration between TRIUMF, Canada’s universities, and our industrial partner, PAVAC Industries, all driven by the hard work and superb technical expertise of dedicated scientists and students here and abroad,” said Dr. Lia Merminga, TRIUMF Accelerator Division Head and co-leader of the ARIEL project.

“Through our technology and knowledge transfer to industry, Canada is now one of only a handful of countries in the world with industrial capacity in SRF technology,” said Dr. Jonathan Bagger, TRIUMF Director. “PAVAC Industries is now in a position to sell leading-edge SRF accelerators to customers around the globe.”

ARIEL is recognized internationally for its cutting-edge technical and scientific capabilities. The Variable Energy Cyclotron Centre (VECC) in Kolkata, India and TRIUMF have entered into a partnership to jointly develop accelerator and isotope production technologies for each facility.

Thirteen institutions from across Canada contributed on building, installing, and commissioning the e-linac. Dr. Dean Karlen, Principal Investigator from the University of Victoria said, “In collaborating on this e-linac project, we developed a strong partnership with TRIUMF. The University of Victoria put forward the proposal to CFI and also provided oversight for the project. Within the Physics Department, a group of students and staff designed, built, and commissioned the system that examines the electron beam inside the accelerator. In addition, the e-linac project allowed the University to develop a graduate program in Accelerator Physics with TRIUMF.”

"The ARIEL project continues to signal to the world that Canada is at the leading edge of accelerator physics and engineering," said Dr. David Castle, Vice-President Research at the University of Victoria. "The remarkable success of this project has also brought many Canadian and international universities together in the spirit of true collaboration and intellectual inquiry."

The next phase of the ARIEL project will further expand the collaboration to 19 Canadian universities and five provincial governments. New partnerships will be created with industry, and greater opportunities will arise for the training of the next generation of scientists and engineers. Over the next five years, ARIEL will advance scientific and technical capabilities, will yield even greater societal and economic benefits for Canada, and will solidify TRIUMF as an international hub for cutting-edge rare-isotope research.

Taken from a TRIUMF Press Release