On Monday, September 13th, teams working on TRIUMF’s Advanced Rare Isotope Laboratory (ARIEL) achieved a major milestone for the facility’s electron linear accelerator (e-linac) by reaching an average beam power of 10 kW at the e-linac's design energy of 30 MeV. The results, which come nearly three months ahead of schedule, mark a major leap in the ramp-up of the accelerator’s output to full capacity and eventual operation. 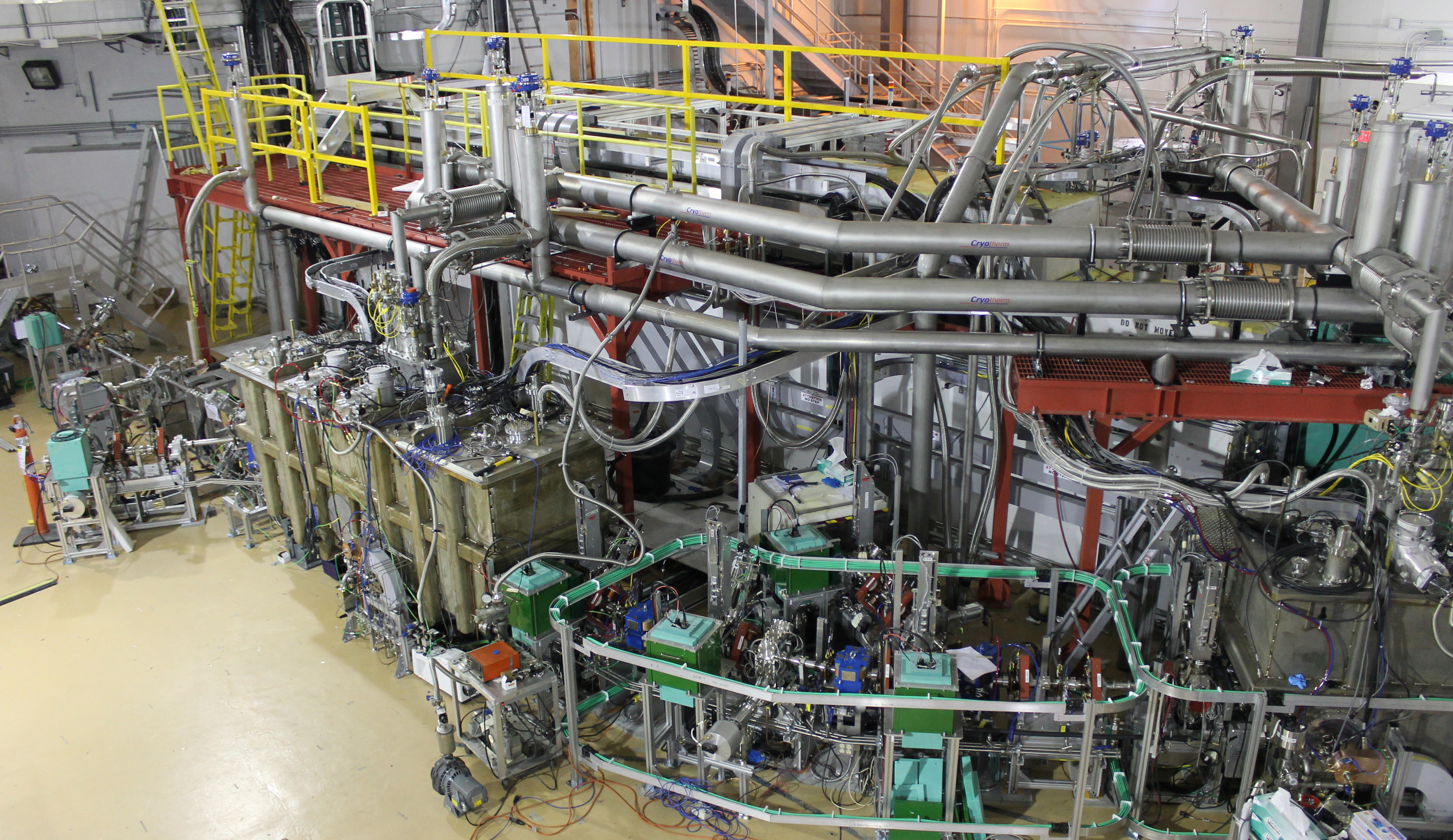 (image: a section of the electron-linear accelerator)

“We are tremendously excited about the results of the e-linac commissioning test,” said Thomas Planche, Research Scientist and member of the Beam Physics group. “The beam we produced provides our best look yet at the final operating state for the e-linac. Further, by achieving 10 kW at 30 MeV, we have shown that we can deliver energy and beam power sufficient to tackle the commissioning of the ARIEL Electron Target East (AETE), which is one of the major projects on our horizon.”

“The e-linac is an integral component of the TRIUMF accelerator complex and the future of our lab,” said Oliver Kester, TRIUMF Associate Lab Director, Accelerators. “Alongside TRIUMF’s existing infrastructure, we will be able to significantly increase our isotope production rate and expand the catalogue of isotopes available for use in our world-class experimental facilities. This achievement marks a significant step towards that goal, and I would like to congratulate all of the teams involved.”

Unlike the spiral orbits in a cyclotron, the 25-meter-long e-linac accelerates electrons in a straight line. Starting with a fingernail-sized electron source, the e-linac accelerates a beam of electrons to 99.99% of the speed of light and guides them to hit an isotope production target located about 100 m away.

The e-linac was originally foreseen as a 50MeV accelerator with the capability to operate at a high current of up to 10 mA in order to produce an intense electron beam, maximizing the creation of rare isotope beams. Though the full design energy won’t come online until after the addition of a third accelerating module, the results of the 30MeV and 10 kW commissioning test satisfy the first-year operation requirements and provide an important affirmation of the many years of hard work undertaken to build, install, and commission the e-linac.

“We encountered no difficulties, and the machine behaved beautifully,” said Planche. 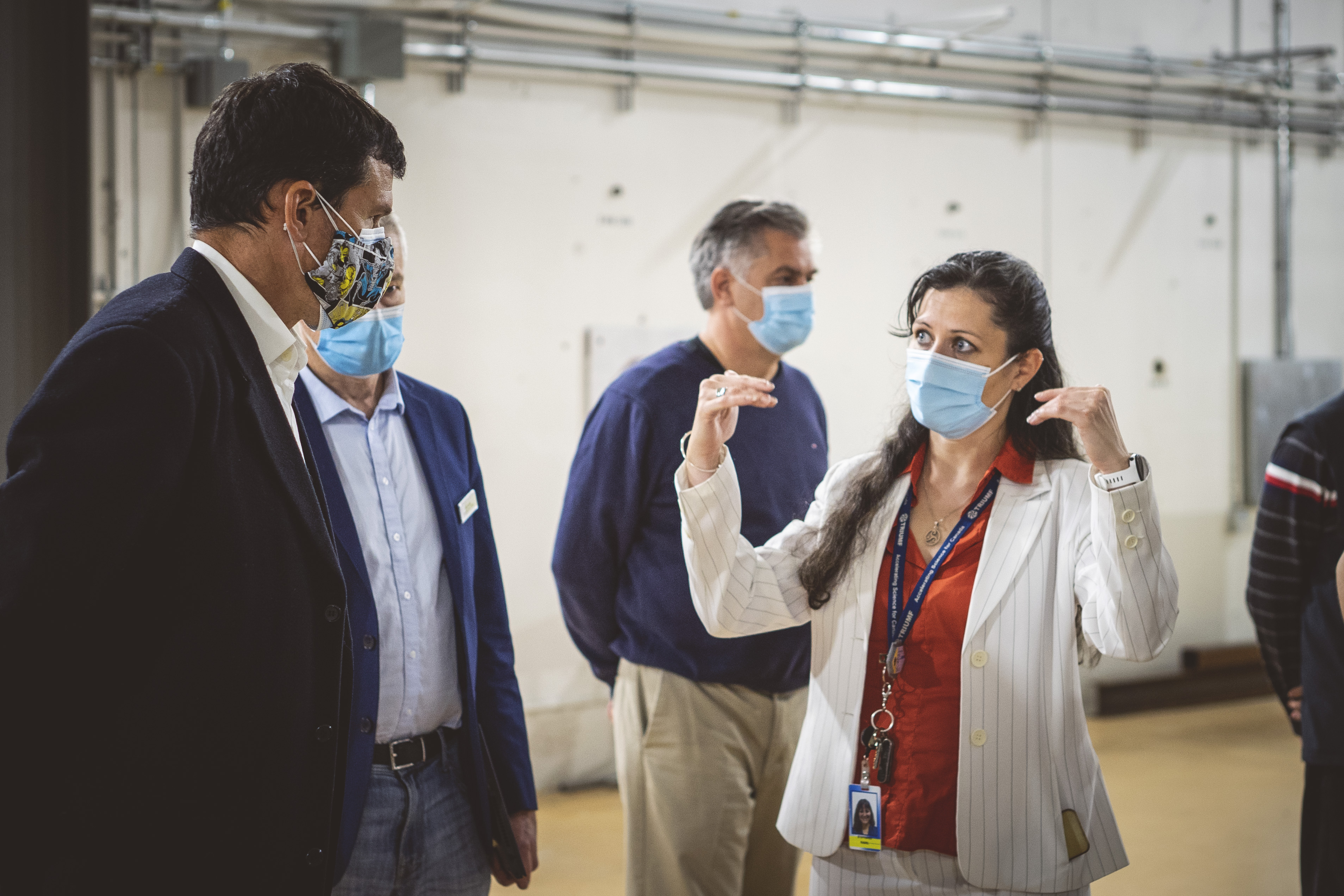 (image: Stephanie Radel explains the commissioning process to colleagues from Canadian Light Source during a facility tour on September 17, 2021)

“The e-linac features some of the world’s most leading-edge technologies for producing rare isotope beams with linear accelerators,” said Stephanie Radel, TRIUMF  Research Associate - High Energy Beam Developments. “To see a glimpse of the operating capacity of the e-linac serves as a wonderful inspiration to all the people who have contributed to this project over many years. We would like to thank all these people who assisted with commissioning, particularly the Driver Control Room operators for their continuous support. A big thanks goes also to all the members of the e-linac machine protection team. We are starting to see the future of TRIUMF science with ARIEL take shape, which is incredible!”

The TRIUMF-designed and Canadian-built e-linac has been brought online in a staged process, beginning with a first partial energy (23 MeV) beam in 2014. The next phase of work, which continues through to 2023, will see the e-linac team working to improve the reliability and operability of the machine for round-the-clock operation.

The e-linac team would like to thank all the people and teams involved with the commissioning, including but not limited to: Cryogenics, SRF, Low-level RF, diagnostics, Vacuum, Mechanical and Electrical services, the Beamlines and Power Supplies groups, the Physical Sciences Division (for their key contribution to the machine protection system), the Accelerator Division operations (for continuous support), Controls, RPG, Beam Delivery, Beam Physics, and others.

Congratulations to everyone who contributed to this major milestone!