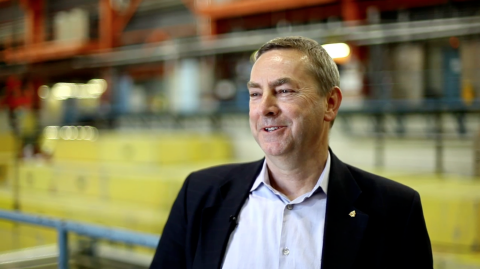 Dr. Nigel Lockyer, who served as TRIUMF’s Director from 2007 to 2013, has been awarded the Most Excellent Order of the British Empire, or OBE, for his services to science and UK/US relations.

The OBE is a British order of chivalry and one of the most prestigious honours in the United Kingdom, acknowledging contributions to the arts and sciences, work with charitable and welfare organisations, and public service outside the civil service.

Following appointments at the University of Pennsylvania, Lockyer arrived at TRIUMF in 2007 and completed his first term as Director through to 2012. During his tenure, TRIUMF solidified its reputation as a global centre for excellence in particle and nuclear physics, materials science, and beyond, and secured more than $300 million of multi-year funding.

Lockyer's contributions were critical in charting the trajectory of many of TRIUMF’s current programs. Under his leadership, the laboratory conceived and started construction on TRIUMF’s Advanced Rare Isotope Laboratory (ARIEL), a premiere multidisciplinary research facility for rare isotope science. Similarly, with support from the Government of Canada’s Centres of Excellence for Commercialization and Research program, Lockyer oversaw the initiation of Advanced Applied Physics Solutions (AAPS) Inc., a commercialization arm for TRIUMF which has since evolved into TRIUMF Innovations.

The OBE award is just the latest of many recognitions for Lockyer’s contributions, a list that includes the Panofsky Prize, an American Physical Society Fellowship, the Bryden Award and the DOE Distinguished Career Service Award. In addition, he was bestowed the decoration of “Cavaliere” (Knight) of the Order of the Star of Italy.

“I am very pleased to see our close colleague Dr. Nigel Lockyer, presently the Director of the U.S. Department of Energy’s Fermi National Accelerator Laboratory (FNAL), being recognized with this tremendous honour,” said TRIUMF Director Dr. Nigel Smith. “TRIUMF would not be what it is today without his vision for the laboratory and his tenacious pursuit of new opportunities. It is a privilege to continue the work that he started, and I join our wider community in wishing him a fond and well-deserved congratulations.”