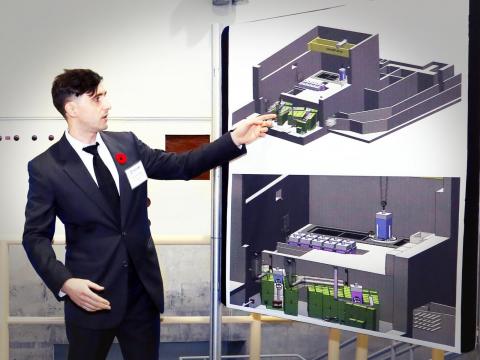 At first sight, these words might sound like the backbone for Hollywood’s latest sci-fi blockbuster, not the concepts around which experiments revolve at Canada’s national lab for particle and nuclear physics.  As the latter holds truth, how do we bypass the language barrier constructed through jargon and muddled in movies and video games?

Answer: over a pint of beer.

TRIUMF Remote Handling Group Leader and Nuclear Engineer Grant Minor turns to pop culture to answer the big questions of the universe for his talk at Nerd Nite Vancouver on May 26.  The evening, which will be held at The Fox Cabaret, features individuals from the STEM community who will share knowledge from their areas of expertise with the public.

“I have a lot of friends who have always asked me questions about what I do,” said Minor while explaining the event. “This is a good opportunity to speak to them in an informal environment and make some jokes about it.” He continued, “I think that’s sort of the pitch of the evening – to have a light-hearted view of this high-tech world.” 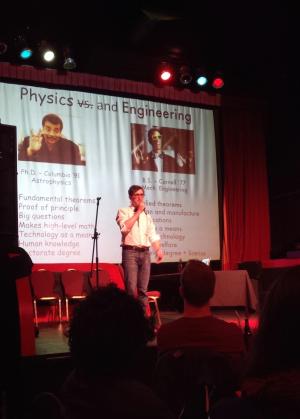 As advancements are in made in the STEM communities, there is the ever-present struggle to communicate the newfound knowledge in a way that is both accessible and accurate. Unfortunately, we cannot all be as savvy as Neil deGrasse Tyson and Bill Nye.

“It’s always been a bit of a goal of mine to be able to speak like them on science, physics and engineering,” said Minor. “I think it’s rare to find someone who has the sense of humor and communication skills required to make it really engaging for the average person.”

With an academic background in engineering and physics, a moonlighting career in live performance with several Vancouver bands on the punk and indie circuit, and a passion for sci-fi, Minor is definitely up for the task.

Events like Nerd Nite are gaining popularity around the globe. The Pint of Science festival in London last week featured a similar format. Scientists stationed in pubs across the city took time to explain their research to their curious public.

Minor expressed that events like these could be key to engaging and sharing crucial information. “Without science and a logical approach to problem solving, our world would become a mess, I believe,” he said.

For those worried about an engineer explaining physics, Minor encourages “physicists to attend, be prepared to have a beer and defend themselves.”

Catch Minor’s talk “The Search for a Beautiful Solution: Physics, Engineering, Superheroes, Demon Portals, and YOU” at Nerd Nite tomorrow evening. The event takes place at The Fox Cabaret at 7:00 p.m.  Early Nerd tickets are available for $5 on Eventbrite and $8 at the door.