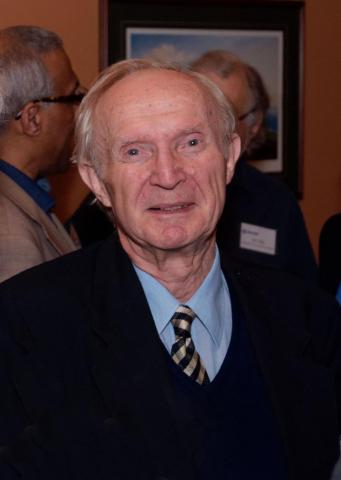 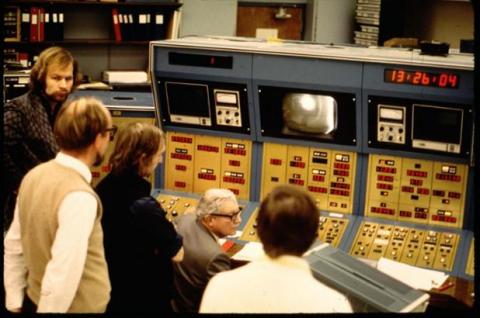 Dr. Michael K. Craddock, a University of British Columbia (UBC) Professor Emeritus and former TRIUMF Research Scientist, passed away on November 11, 2015 at St. John’s Hospice at UBC following a brief illness. He was 79 years old. He was one of the founders of TRIUMF, who was present the moment the idea for the lab was conceived, and who worked tirelessly on the cyclotron and other key projects for the next 51 years, including 33 years as TRIUMF’s head accelerator physicist until his retirement in 2001.

Mike Craddock was born April 15, 1936 in the United Kingdom.  He received his Bachelor’s and Master’s degrees in mathematics and physics at Oxford University in 1957 and 1961, respectively. He was a Scientific Officer at Rutherford-Appleton Laboratory while pursuing a D.Phil. in Nuclear Physics at Oxford, which was awarded in 1964. Upon graduation he joined the Physics Department at UBC, where he remained throughout his career.

Originally hoping simply to conduct experiments at UBC’s Van de Graaf accelerator, he was almost immediately thrust  into the department’s campaign to build a new accelerator on campus. Tasked by Prof. John Warren to investigate options for a new machine, he recommended a modified version of the H- cyclotron designed by Reg Richardson at UCLA. Mike managed the overall specification, which settled on a scaled down 500 MeV, 20 μA machine. The TRIUMF project was formally accepted by the Canadian government in 1968, and from then until 1978 he was the group leader for beam dynamics. His most memorable challenge during this period was the responsibility for determining the position and number of the magnetic shims installed  during the massive field-shaping campaign of 1973-74. He was present at Richardson’s shoulder when the first beam emerged December 15, 1974 (see photo below).

Mike was TRIUMF’s leading beam physicist throughout his career, from joint head of the Beam Development Group from 1978-1981 (under Director Jack Sample), then as Accelerator Research Division head from 1982-88 and head of the Accelerator Division 1989-1994 (under Director Erich Vogt), to group leader for Accelerator Physics from 1995 until his retirement in 2001 (under Director Alan Astbury).  He was one of the chief architects of the KAON Factory Project, where as deputy to project leader Astbury he led a multi-disciplinary team in the engineering design of a suite of synchrotron-type proton accelerators.  Following the inability of KAON to attract federal funding, Mike set to work on projects related to the Large Hadron Collider (LHC) accelerator injector chain at CERN, the success of which raised TRIUMF’s profile worldwide.  Remarkably during all this time he supervised over 14 graduate students, regularly taught undergraduate and graduate physics courses, and acted as TRIUMF correspondent for the CERN Courier journal.

Retirement did little to tamper Mike’s relentless energy. He joined the Accelerator Development Group (led by Rick Baartman) worked on several projects, including continued LHC work before settling on the topic of Fixed-Field Alternating Gradient Accelerators (FFAGs) from 2004 to 2012, where he participated in an international project to build a 20-MeV electron model (EMMA) at Daresbury, UK.  He was a constant presence at TRIUMF, organizing conferences, presenting (since 2009) introductory accelerator physics lectures to students at TRIUMF, UBC, and the University of Victoria, all the while acting as unofficial TRIUMF biographer, which included his series of “Forty Years On” newsletter articles and many talks on the history of the lab.

During a career that spans five indefatigable decades, Michael has demonstrated exceptional leadership in the field of high-energy particle physics and notably in particle accelerator design and construction, and has been instrumental in fostering new generations of accelerator physicists in Canada and abroad. A testament to this and his outstanding character, before he passed, he made a very thoughtful and far-reaching gift to TRIUMF to establish the Michael Craddock Fund for Accelerator students at TRIUMF.

His passing has left a gaping hole in the TRIUMF family and has been felt around the world.  He will be sorely missed by all who knew him.

Michael Craddock lived in Vancouver, BC.  He had one son, Barnaby, a stepdaughter, Vanessa, and a stepson, James, and was predeceased by his wife Sonia. In lieu of flowers, donations can be made to the St. John Hospice, the Pancreas Centre BC (both via the BC Cancer Foundation or the Vancouver General Hospital), or the newly established Michael Craddock Fund for Accelerator students at TRIUMF (via TRIUMF).