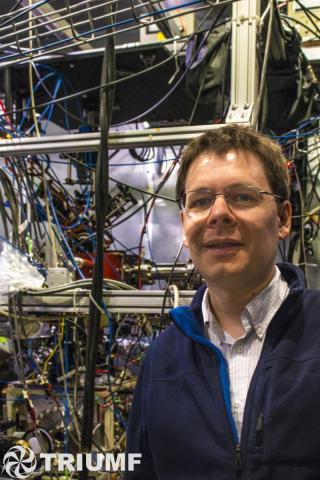 Professor Seth Aubin joins the top rank of Canadian and American academics as a Fulbright Scholar Award Recipient. As a member of the 2014-2015 American cohort, the College of William and Mary professor will be one of the 22 award recipients travelling to Canada to further their knowledge during this academic year.

Established with the goal of promoting international cultural and educational exchanges, Fulbright Canada selects top-tier academics from a range of fields to join their prestigious program. The program enables collaboration between the United States and Canada by allowing promising individuals to conduct research and teach away from their home country.

Aubin’s award will allow him to travel to Vancouver from Williamsburg, Virginia to continue participating in the FrPNC experiment, an atomic parity violation experiment at TRIUMF.  In addition, he will be conducting research at TRIUMF’s new francium trapping facility, which he helped establish. This research will aid in furthering TRIUMF experiments that make use of short-lived isotopes.

Aubin spoke to TRIUMF Communications Assistant Kelsey Litwin about the work he will be doing throughout the fellowship and the value of being a Fulbright Scholar. This interview has been edited for clarity anf length.

What is your relationship to TRIUMF? Why did you choose it as your host institution for the fellowship?

SA: I work with the FrPNC collaboration to measure parity non-conservation in laser-cooled francium produced at TRIUMF. It is one of the leading francium production facilities in the world. I chose TRIUMF as the host institution for the Fulbright Scholar Award so that I could spend more time working on the FrPNC experiment.

Can you explain the research that you will be doing?

SA: The main objective of the FrPNC collaboration is to study the weak interaction at very low energy via its unique parity non-conservation signature. The weak force is unique among the four fundamental forces of nature in that is violates parity, “mirror” symmetry. Parity is an intuitive symmetry: If you reverse the spatial properties of a physical system, then you expect that the system will behave in the same way as the original.

How will you be doing this?

SA: We are setting up the experiment to measure parity violation by observing parity forbidden optical and microwave transitions in francium. Firstly, we use a laser probe to measure spin-independent optical parity violation, produced by a weak force interaction between the valence electron and the nucleus.

Secondly, the microwave experiment will measure spin-dependent parity violation caused by the nuclear anapole moment, which is due to weak force interactions between nucleons.

While parity violation in francium is relatively large compared to other atoms, the measurable effects are still very small, at the few parts per 10 billion-level, so the measurements are quite challenging. We laser cool francium down to 100 micro-Kelvin to improve the delicate parity violation signal.

What do you hope to accomplish during your time here?

SA: I have two main objectives: a scientific one and a communications one. On the science side, I will work on readying the laser and microwave systems for a three-day data run in late August. This work will also include working with FrPNC students.

For communications, I will give several talks in the Vancouver-Victoria region to exchange ideas and disseminate FrPNC research on parity violation and research in my own group at the College of William and Mary.

How will this fellowship help you forward your research?

SA: First, the Fulbright fellowship gives me the opportunity for more in-depth and on-site research on the FrPNC experiment. This is an exciting time to be in the lab at TRIUMF. We are completing the engineering of the FrPNC apparatus and are beginning the transition to taking more physics data and eventually parity violation measurements.

Fulbright Canada aims to strengthen educational and cultural exchanges between Canada and the United States. What is the relationship between the two countries, in terms of particle physics research?

SA: The FrPNC experiment involves many of the sub-disciplines of physics, since it uses optical and atomic physics experimental techniques to measure nuclear and particles physics effects. My contribution, and the contribution of my U.S. collaborators, is primarily through our atomic and optical physics expertise. TRIUMF and our Canadian collaborators tend to provide more of the particle and nuclear physics knowledge and instrumentation. The combination of these vastly different physics techniques makes this research effort very interesting and fairly unique.

The FrPNC experiment is effectively a joint research effort by the two countries, since both Canadian sources – NRC, NSERC, and TRIUMF – and American sources –DOE and NSF – have provided significant funding. The Fulbright fellowship now further extends the US participation at a time when the experiment will benefit from additional on-site work.

As a dual US-Canada citizen, I am proud to be working in Canada at TRIUMF in support of the U.S. side of the collaboration. The scientific work enables significant educational exchanges within the collaboration.

More information about the collaboration can be found here, via the University of Maryland.

Infographic by Kelsey Litwin, with information from Emily Edwards, of the University of Maryland.