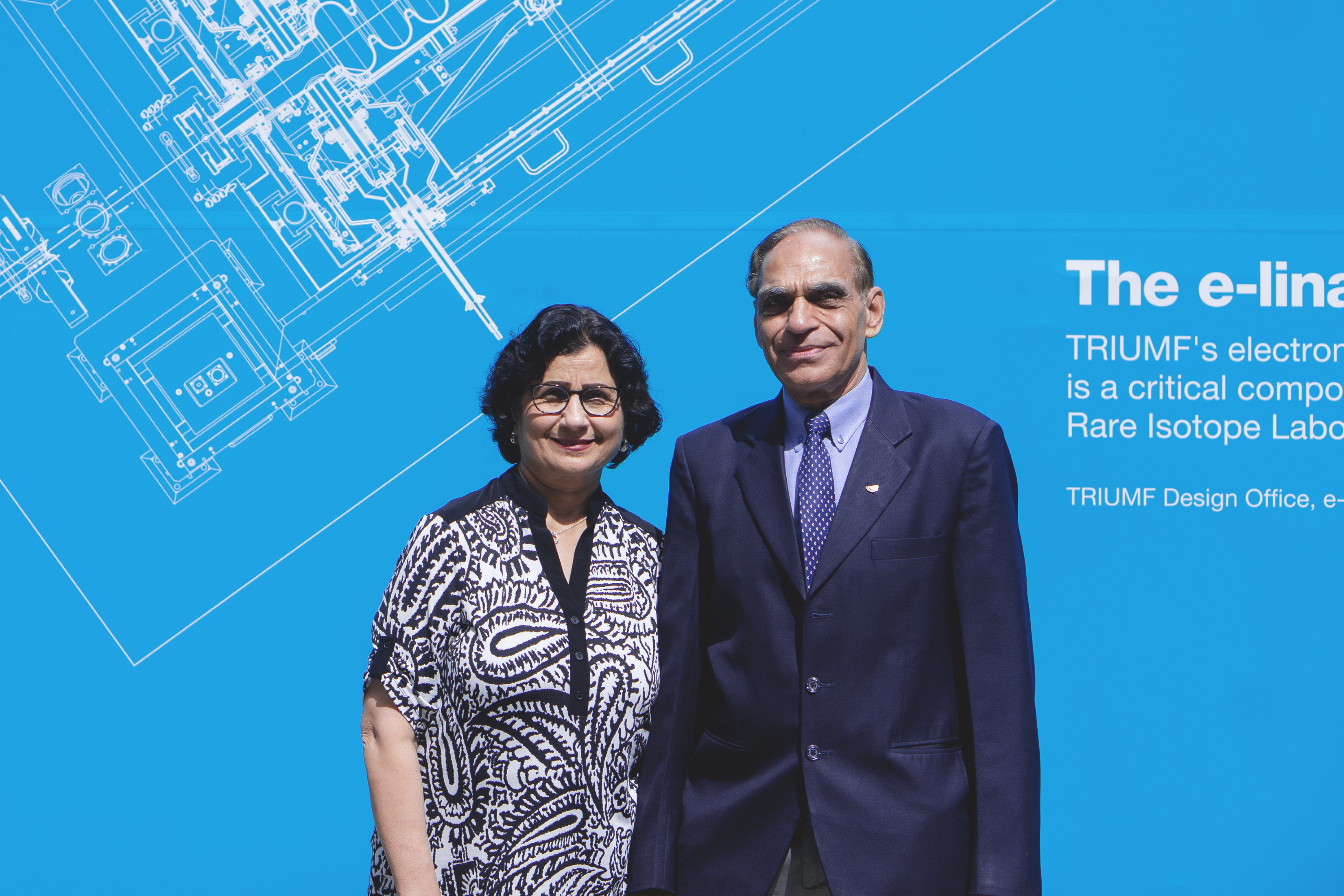 TRIUMF is pleased to announce that Vijay Verma, Researcher Emeritus and alumnus, and his wife Shiksha have made a generous contribution of $25,000 to establish the Vijay and Shiksha Verma Family Endowment Fund, which will provide salary support for a TRIUMF student position that will be recognized as a Vijay Verma Scholar. The endowment is inspired by the memory of Vijay and Shiksha’s parents, who instilled in them the values of education, life-long learning, humility, and benevolence – values that the Verma family has in turn brought to TRIUMF.

The Vijay Verma Scholar Award will recognize one outstanding undergraduate student per year working at TRIUMF in the fields of engineering (specifically in the areas of accelerators and detectors), project management, computer science, or life science. The award builds on the Verma family’s decades-long dedication to TRIUMF and its legacy of empowering student training and educational opportunities.

“We are thrilled to be able to share this news with the wider lab community today,” said Vijay Verma. “Over decades, our family has built deep ties with TRIUMF, and we are very pleased to be able to give back and support the legacy of excellence that TRIUMF embodies.”

Vijay joined TRIUMF in 1973, serving first as an electrical engineer with the Magnet Power Supplies and Beam Lines groups. Shortly after his arrival to the laboratory, Vijay moved into the position of project planner and eventually Group Leader of the Planning Department, a role that he held until his retirement in 2013. In these capacities he provided valuable services to TRIUMF’s management and staff, studying and optimizing the application of both human and other resources to maximize project successes and group collaboration. More widely, his many contributions have played a pivotal role in TRIUMF attaining its international reputation in discovery science research.

Vijay’s children, who contributed to TRIUMF as co-op students themselves, are also as members of TRIUMF’s alumni community.

“The Verma family have collectively contributed greatly to the TRIUMF community, in many capacities, for decades. We are extremely grateful that they have chosen to give back to our community in such a generous manner,” said TRIUMF Director and CEO, Nigel Smith. “This incredible gift will support TRIUMF’s world-class student program, which provides invaluable experience for talented students from across our country, working alongside our TRIUMF colleagues.”

The Verma Family Endowment adds to a growing list of charitable gifts and endowments established by notable TRIUMF alumni, including the Mike Craddock Endowment Fund and the Grant Sheffer Endowment Fund. These philanthropic efforts acknowledge the close bonds that many TRIUMF staff and students establish during their time at the laboratory – for many, these are life-long journeys as part of the community.

“TRIUMF brings a tremendous benefit to those who are fortunate enough to be a part of its community,” said Verma. “In addition to contributing to world-class, leading-edge science, we gain access to professional networks, career development opportunities, and avenues to interact with and support the next generation of science leaders. We hope that this gift serves to encourage other members of the TRIUMF community – both alumni and others – to consider giving back in any form to the organization that has contributed so much to us all.”

TRIUMF would like to extend a sincere thank-you on behalf of the wider lab community to the Verma family for their generous donation and contributions across the years.

More information on the Endowment is forthcoming.

Thank you, Vijay and Shiksha!