A custom-made revolution for isotope beamlines

Deep in the basement of TRIUMF’s Advanced Rare IsotopE Laboratory (ARIEL), a new age for accelerator science-based research in Canada is taking shape. Amidst the bright concrete walls and distant hum of high-voltage electricity, a series of gleaming metal pipes and chambers is converging under the watchful eye of TRIUMF scientists, engineers, and technicians; an assembly that, once complete, will usher in a bright new era for subatomic physics research in Canada and internationally.

As TRIUMF’s flagship multidisciplinary research facility, ARIEL will serve to maintain TRIUMF’s position at the forefront of cutting-edge rare isotope research, a field that uses short-lived elements not typically found on Earth as means for discovery. Cutting-edge research requires cutting-edge technology improvements to support it. It was this requirement – and an innovative mindset – that inspired the design of the Rare Isotope Beam (RIB) transport system. The completed transport system will consist of 200 metres of beamline that will deliver rare isotopes from ARIEL’s target stations to the existing Isotope Separation and Acceleration (ISAC) facility experimental areas. ARIEL reached a milestone in December 2016 with the successful installation of a 15-meter prototype section, which served as a test for the new design. The RIB team aims to complete the full 200-metre installation by 2021. 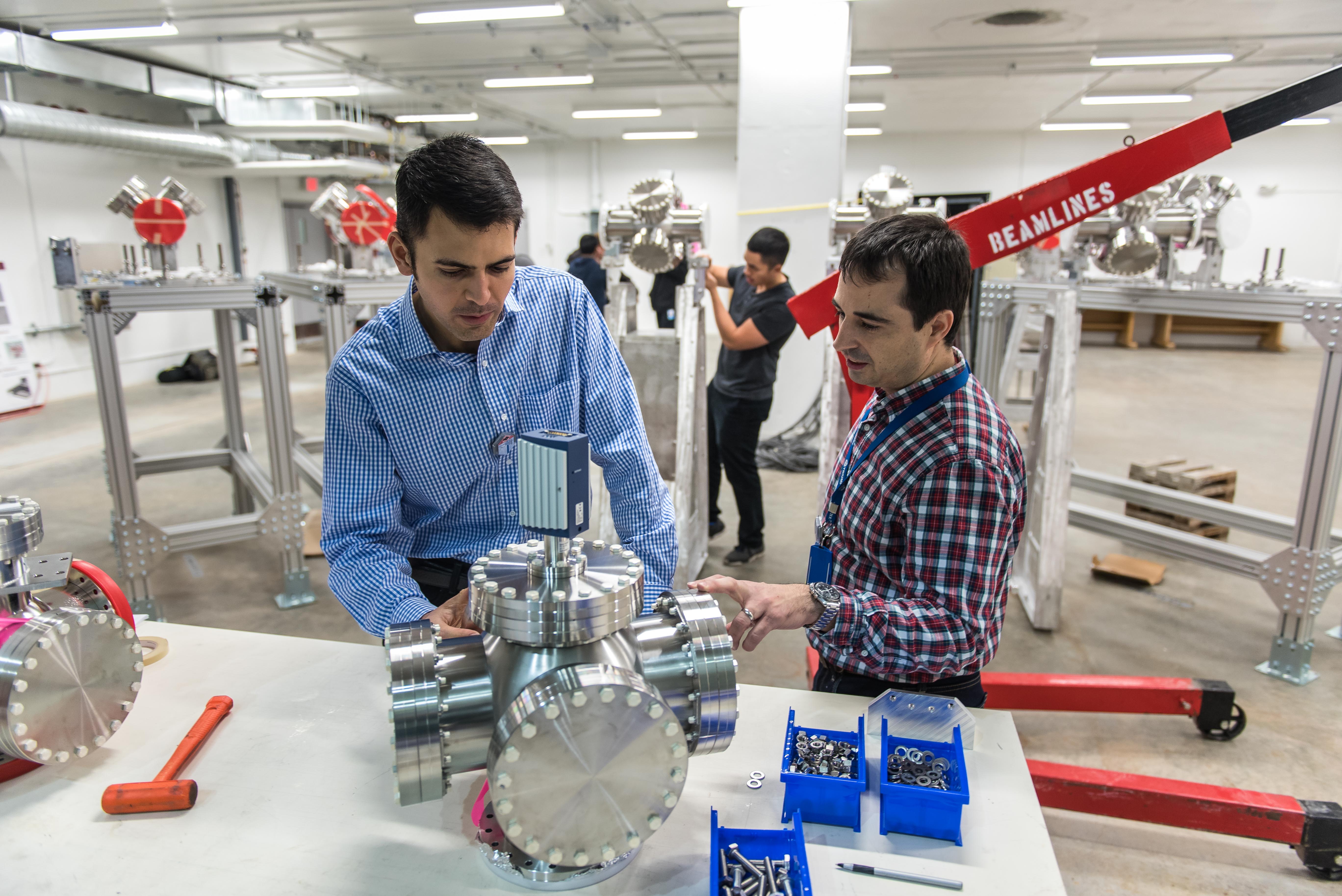 The design of the RIB transport system is based on TRIUMF’s current ISAC beamlines. Like much of the mechanical technology used within the lab, both the ISAC and ARIEL RIB systems were designed entirely at TRIUMF. Physicists and engineers worked from existing commercially available technology to develop a system that fits TRIUMF’s unique research needs. “It’s not that we purchase parts from outside and just park something over here,” explains Marco Marchetto, a TRIUMF accelerator physicist and project leader for the ARIEL RIB transport system. “This is something that we completed from scratch at TRIUMF. We actually designed every aspect of this system.”

Modeling the RIB technology began with the most basic of beamline components: the electrostatic quadrupoles and benders that guide and direct the beam. Isotope beams are controlled with stationary electric fields created by four electrodes, two positive and two negative, positioned in a cloverleaf configuration exactly 50 mm apart. This distance cannot vary by more than 50 microns (the average cross-section of a human hair!), a level of precision previously achieved through complex jigs and individual alignment of electrodes. The RIB prototype team decided to instead take advantage of high-precision CNC machinery to cut the components to the required precision so that technicians need merely to tighten the bolts to align the electrodes. The process of assembling a quadrupole, once a day-long task, can now be completed in an hour. This development has a tremendous impact on the engineers and technicians devoted to assembling and installing all 200 metres of the RIB beamline.

One of the greatest challenges in designing the RIB beamline was traversing the ARIEL facility to the experimental halls; the beamline has to scale two floors and cross between multiple buildings. It was here that Norman Muller, a mechanical design engineer at TRIUMF and the RIB project integrator, stepped in to translate basic physics principles into real engineering designs. Muller implemented a clever system of beamline mounts. At first glance, they appear to be only loosely held together, but, upon closer inspection, the mounting system is revealed to be entirely suspended using novel ball and socket joints that rely on tension and compression. Easily assembled and adjusted, the RIB suspension system is so elegant that, as Marchetto puts it, “it looks like it’s floating on air.”

From vacuum to mounts, the entire RIB transport system was custom-designed at TRIUMF to be efficient, modern, and innovative. The RIB is a shining example of the ingenious, cutting-edge technology that prepares ARIEL, and the global physics community, for an exciting and successful future.