A TRIUMF for ALPHA-2 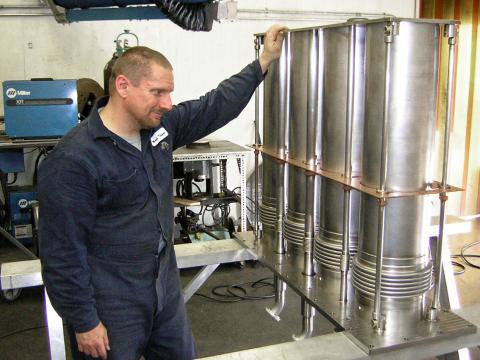 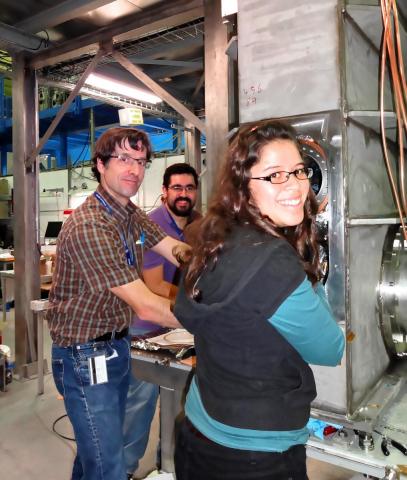 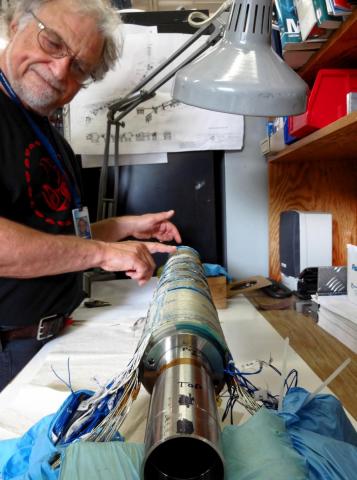 The ALPHA Collaboration, including several key contributors from TRIUMF, once again pushed the boundaries of antihydrogen research with their latest breakthrough. Published recently in the prestigious journal Nature, their work improved the precision of antihydrogen’s charge, essentially zero, by a factor of 20. This result is the first obtained with the upgraded ALPHA-2 apparatus, the cryostat of which was designed and built at TRIUMF and the University of Calgary.

Figure 1: TRIUMF machine shop welder Niel Theim admiring the ALPHA-2 helium reservoir, which proved to be the most challenging piece of welding in the whole project.

Dr. Andrea Capra is a TRIUMF postdoctoral fellow who as Menary’s graduate student played a major role in the analysis behind this result. “We take the charge of matter and antimatter for granted,” says Capra, “however, you cannot analyze data or make an experiment assuming it’s true.” This result showed that antihydrogen is indeed electrically neutral to a precision 20 times greater than before.  Since the antiproton charge is also known to a similar precision, the collaboration improved the precision of the positron charge by a factor of 25. While both results uphold the Standard Model, they have constrained possible extensions to it.

The experiment was the first using the upgraded “ALPHA-2” system which began operation last year. The largest component, the cooling cryostat, was designed and built at TRIUMF and the University of Calgary by a team led by TRIUMF Mechanical Research Engineer Cam Marshall and TRIUMF Research Scientist (now Emeritus) Art Olin. Scientists at Simon Fraser University and the University of British Columbia also contributed to the construction and assembly of the ALPHA-2 apparatus, including the cryostat.

Marshall explained that “the cryostat houses a unique octopole magnet with the antimatter trap, into which was fed the laser spectroscopy system, microwave system, liquid helium cooling, super-conducting current leads, diagnostic wiring, and thermal shielding. A lot going on in a small space!” According to Olin, the experiment’s success was “facilitated by the stable cryogenic environment and higher trapping rate of this new atom trap.” The experiment was tricky because the team had to isolate the antihydrogen within a sophisticated “magnetic bottle” without it coming into contact with matter as it would then annihilate and disappear.

Having passed the first test of their upgraded apparatus with flying colours, the ALPHA Collaboration is anxious to attack the other even more exciting pieces of the antimatter puzzle in the coming years.

“We will now look at the other pieces of the puzzle, such as the colour of the light emitted by antihydrogen, and test whether hydrogen and antihydrogen emit light in the same way,” says Capra. “We are also working on measuring the gravitational acceleration of antihydrogen and determining whether matter and antimatter have the same gravitational behaviour. The next several years are going to be very exciting.”

For More Information: The research, “An improved limit on the charge of antihydrogen from stochastic acceleration”, was published in the journal Nature at http://dx.doi.org/10.1038/nature16491. High resolution images are available at the ALPHA and CERN websites.