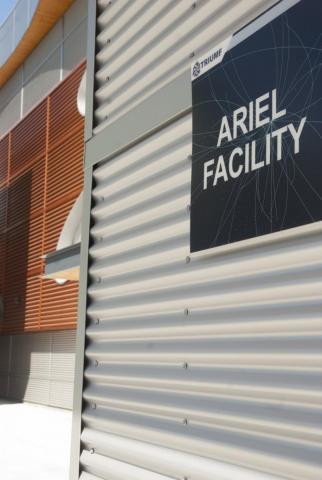 October 6, 2016, Victoria, Canada — Today the B.C. Government announced an $8.7 million investment in a national initiative to bolster Canada’s world-class rare-isotope capabilities. The contribution from the B.C. Knowledge Development Fund (BCKDF) supports TRIUMF’s Advanced Rare Isotope Laboratory (ARIEL), a two-phase multidisciplinary research facility that will advance our fundamental understanding of the world in which we live.

The ARIEL initiative is led by the University of Victoria (UVic), with 18 additional collaborating university partners from across Canada. In addition to the BC investment, ARIEL is supported by contributions from the Canada Foundation for Innovation and the provinces of Alberta, Manitoba, Ontario, and Quebec.

Rare isotopes are powerful tools for scientific discovery with a broad range of real-life applications from medicine and life sciences, to advanced industrial manufacturing. To fully understand the properties of rare isotopes requires unique techniques and tools such as those being developed with ARIEL. Rare isotopes are not typically found in nature; they’re produced by particle accelerators in a handful of laboratories around the world, such as TRIUMF, Canada’s national laboratory for particle and nuclear physics and accelerator-based science.

With the addition of ARIEL, TRIUMF will significantly increase its scientific productivity and the impact of its rare isotope program. ARIEL will be globally competitive and deploy next-generation technologies to deliver a variety of isotopes to multiple experiments simultaneously. This new degree of flexibility will provide TRIUMF users with increased capacity to support research and innovation.

In 2010, the province awarded TRIUMF $30.7 million for the first phase of ARIEL, which included construction of the facility and of Canada’s first high-power, superconducting radio-frequency (SRF) electron linear accelerator – one of the world’s most powerful. TRIUMF worked closely with industry to develop this made-in-BC technology and subsequently transferred it to the private sector.

This latest provincial investment in ARIEL’s second phase is directed toward outfitting the facility, unleashing an increasingly diversified scientific program at TRIUMF and laying the foundation for a more prosperous province. ARIEL reinforces TRIUMF’s role as an international hub for multidisciplinary rare-isotope research, and will strengthen research collaborations, catalyze new industrial partnerships, and generate greater opportunities for training the next generation of scientists, engineers, and technicians.

Since TRIUMF’s founding, UVic and the laboratory have forged strong ties anchored in management and research. The multi-institutional, national aspect of the ARIEL initiative is a testimony to the strong, ongoing partnerships among collaborating institutions and to the effective use of the large-scale infrastructure at TRIUMF for discovery and innovation.

“Researchers at TRIUMF are pushing the boundaries of physics, and I am delighted the province can support this work through state-of-the-art facilities and equipment. Canada’s top innovators are helping to shape medical care of the future, add highly-skilled jobs to our workforce, and create commercialization opportunities – all fundamental parts of our #BCTECH Strategy.”

“British Columbia is home to research universities that are national leaders in innovation. The ground-breaking work at TRIUMF underscores efforts by the B.C. government to attract and retain the brightest minds to this province, changing lives around the world from right here in B.C.”

“Advances in healthcare and medical technology are growing at unprecedented rates, and the work that will come out of TRIUMF’s research will have a tangible impact on the way in which we care for the people of B.C. Provincial investments in this research are strengthening B.C.’s competitiveness in health technology, and helping to train the next generation of our highlyskilled workforce.”

“TRIUMF is a true Canadian asset, located right here in B.C. I am pleased that this provincial funding is unleashing such a breadth of activity. From nuclear physics to medicine, ARIEL is an incredible endeavour that is uniting public and private partners in a shared quest for discovery and innovation. It will benefit science, society, and business, in B.C. and beyond.”

Jamie Cassels, President of the University of Victoria

“This research funding will unlock a whole new realm of possibility, not only for the University of Victoria, but for the world of science. B.C. is one of the few sites in the world that has the capacity to work in this highly skilled sector, and we’re excited to see how this innovative work changes lives.”

“Bringing together so many partners across BC and Canada, the ARIEL facility will bring unique research capabilities to our province and the nation. ARIEL provides the much-needed tools and techniques for us to answer fundamental questions and gain a better understanding about the world around us and even ourselves.”