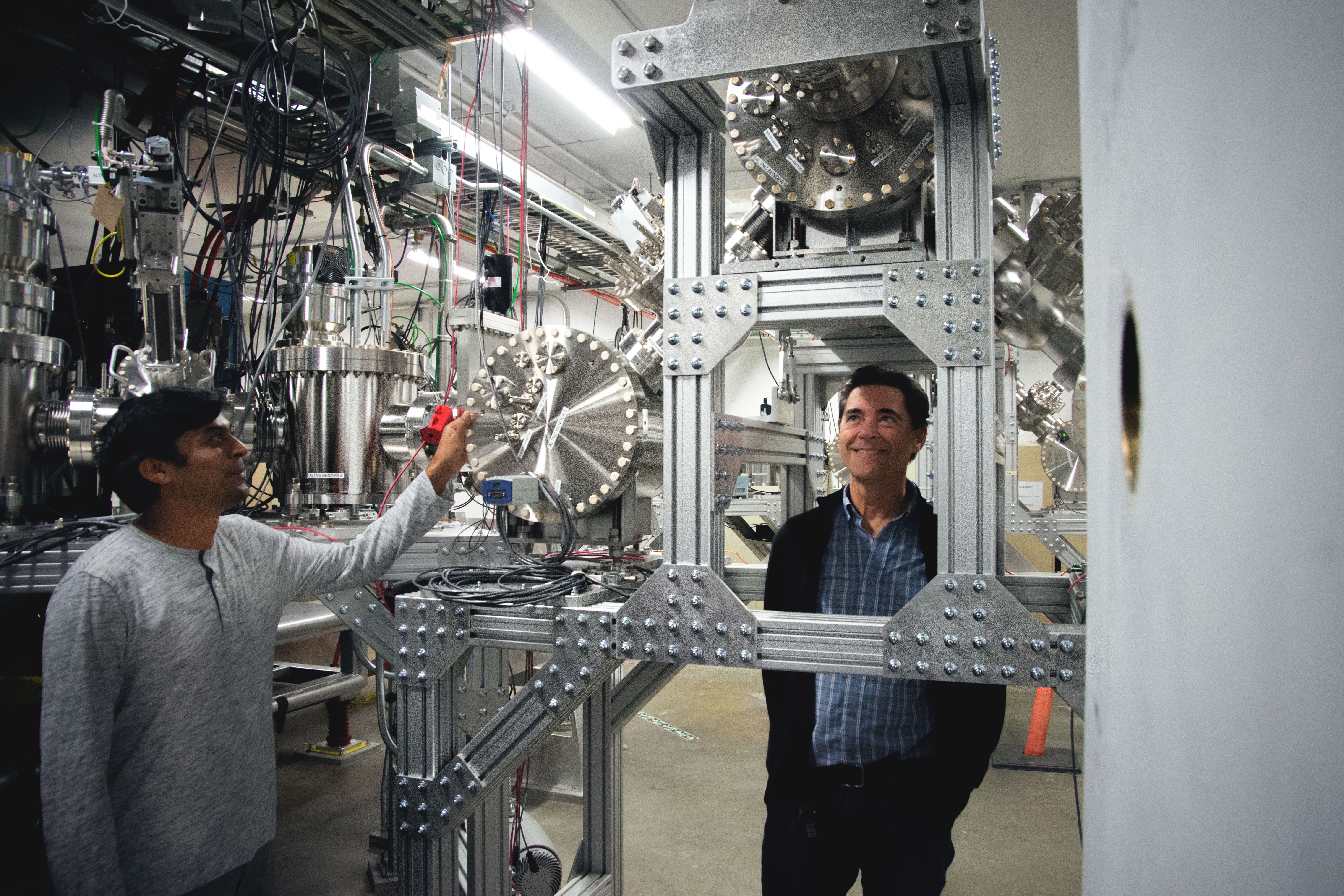 (Caption: Suresh Saminathan (left) and Rick Baartman (right) discuss the commissioning of the B2 Beamlines)

On September 19, 2019, a test beam of cesium (+1) was successfully transmitted through the ARIEL basement B2 beamlines and onwards through the High Resolution Separator (HRS), proving a variety of parameters related to the installation, calibration, and function of CANREB’s beam delivery infrastructure.

The HRS aims to provide the world’s highest-resolution, high-acceptance mass separation for an isotope separation online (ISOL)-type facility, giving TRIUMF researchers the ability to select for and purify beams of isotopes with specific masses. This capacity will significantly enhance the quality and variety of rare isotope beams (RIBs) available for the lab’s diverse nuclear physics-based science programs, which range from studies on nuclear forces to nuclear astrophysics to materials sciences investigations and beyond. It will also enable clean beams for the production of medical isotopes, particularly those for targeted alpha therapy for cancer research.

The HRS’ resolving power – its ability to separate and purify beams – comes from two high-precision magnets. These bend the desired isotopes precisely 90 degrees each. Since the radius of curvature of the isotopes’ path is proportional to the square root of the mass, heavier masses bend less than 90 degrees and lighter masses more, so at the exit of the magnet pair, they are travelling in different directions. 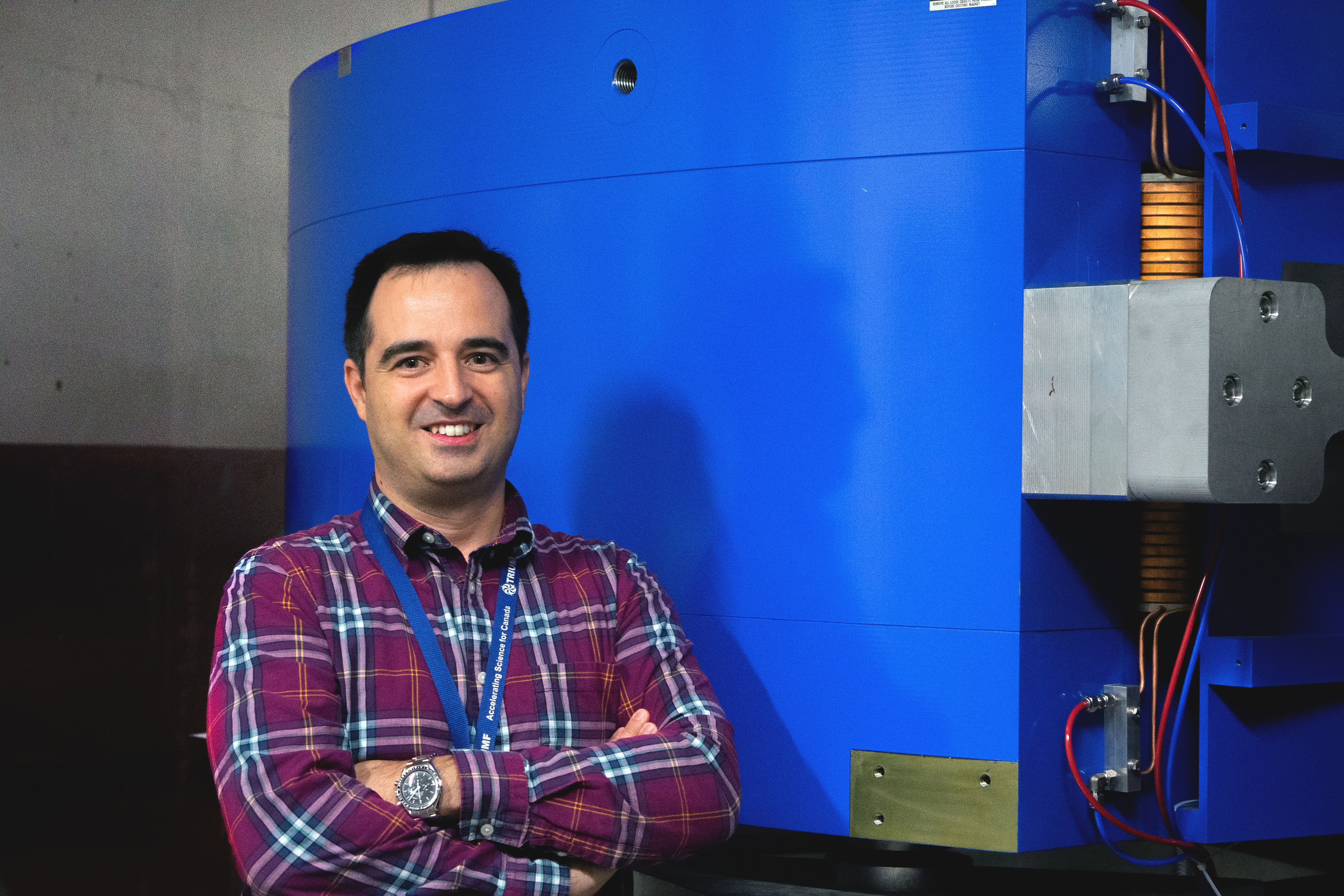 One of the key technical achievements of CANREB’s HRS is the flatness of the magnetic fields – the consistent topology of the fields within and across the surface of each of the massive magnets. At such high precisions, minute abnormalities anywhere in the magnetic fields could direct undesired isotopes to exit, which would reduce the overall purity of the beam. Marchetto, whose Ph.D. thesis was dedicated to the design of the HRS magnets, achieved a field flatness consistency of better than eight-parts-in-100,000; at any point within either of the two massive magnets, the field varies only by this amount. 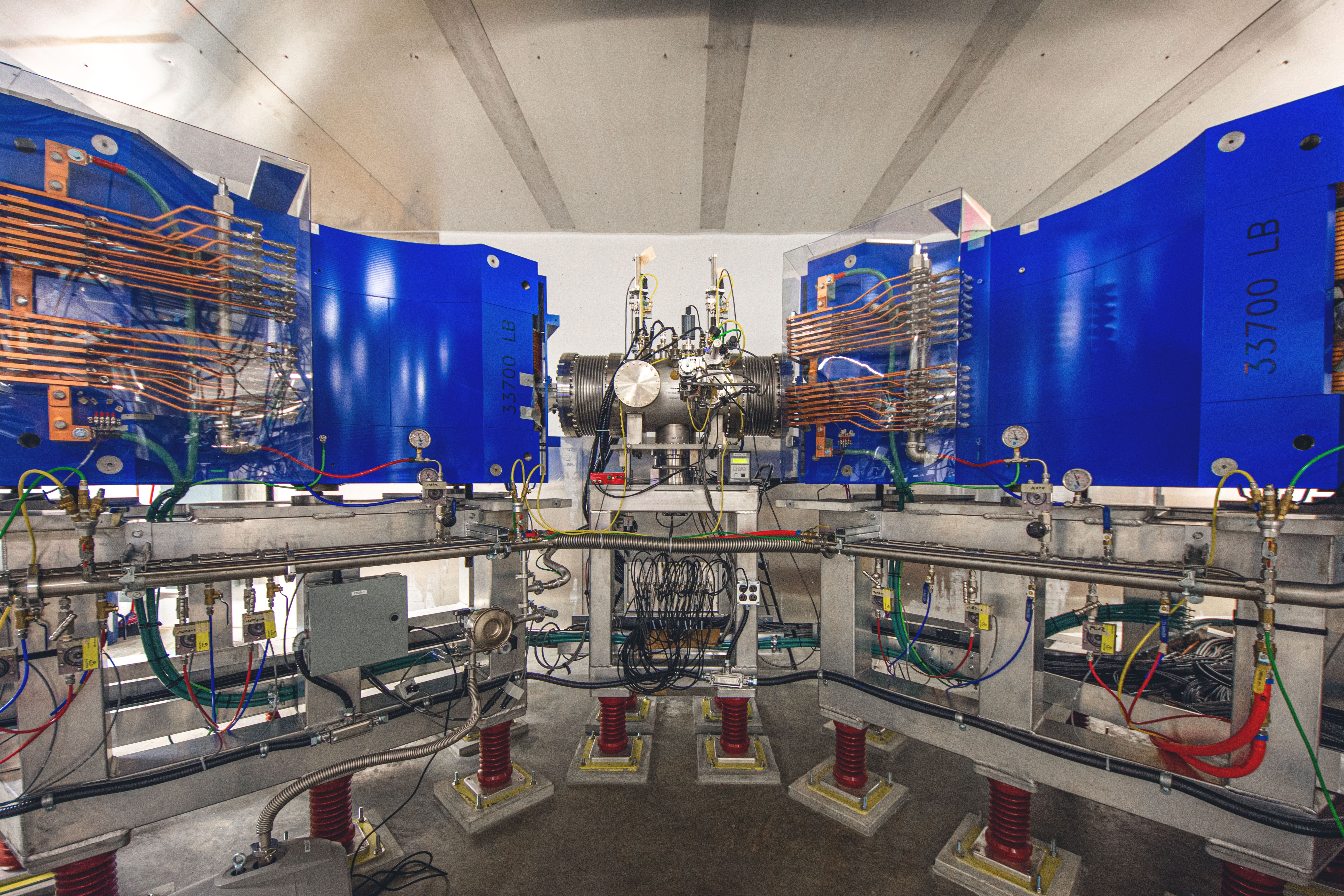 (Caption: the HRS magnets, blue, with the electrostatic multipole between them. The magnets were manufactured in New Zealand by Buckley Systems Ltd., who, with Nelson, B.C.based D-Pace, also manufactured magnet systems for the electron linear accelerator)

This precision is a defining characteristic of the HRS, as well as a mission-critical stipulation for the nature of the isotope science that will be undertaken with ARIEL, explains Ritu Kanungo, Principal Investigator and leader of the CANREB project.

“TRIUMF’s isotope research requires highly pure beams, yes, but also beams of sufficient intensity to be used for its scientific programs,” said Kanungo. “Radioactive beams are extremely challenging to produce, and they often yield relatively little of the desired isotope – mere thousands of particles per second – together with orders of magnitude higher amount of non-desired isotopes. So we must try to conserve most of the desired isotope in the purification process. The principal challenge we face, therefore, is achieving the mass resolution without losing a large fraction of the desired isotopes.”

The figure of 20,000 as the resolution comes from the fact that a mass that is different by one part in 20,000 is displaced by one slit width; 0.1 mm. Although a smaller slit would give even higher resolution, it would also throw away a too-large fraction of the desired isotopes.

“Certainly there are high-resolution spectrometers that can filter ions out at very high resolutions – up to 1-part-in-100,000, even,” explains Marchetto. “However, this is most often achieved by simply minimizing the size of the selection apparatus. You get a highly pure result, but you lose up to 99% of the actual beam. For chemists, geologists or other scientists looking at mass spectra of samples, that might suffice because you only need the identity of the outgoing particle. What we’re tasked with is selecting and purifying a beam from within a larger, more diverse beam, and you can’t do that efficiently by simply narrowing the selection slit because you get a highly pure result, but, unlike with our separator, you lose up to 99% of the actual beam... In essence, what we’ve done is build a highly precise separator that provides resolutions similar to that of a spectrometer without unnecessarily diminishing the intensity.” 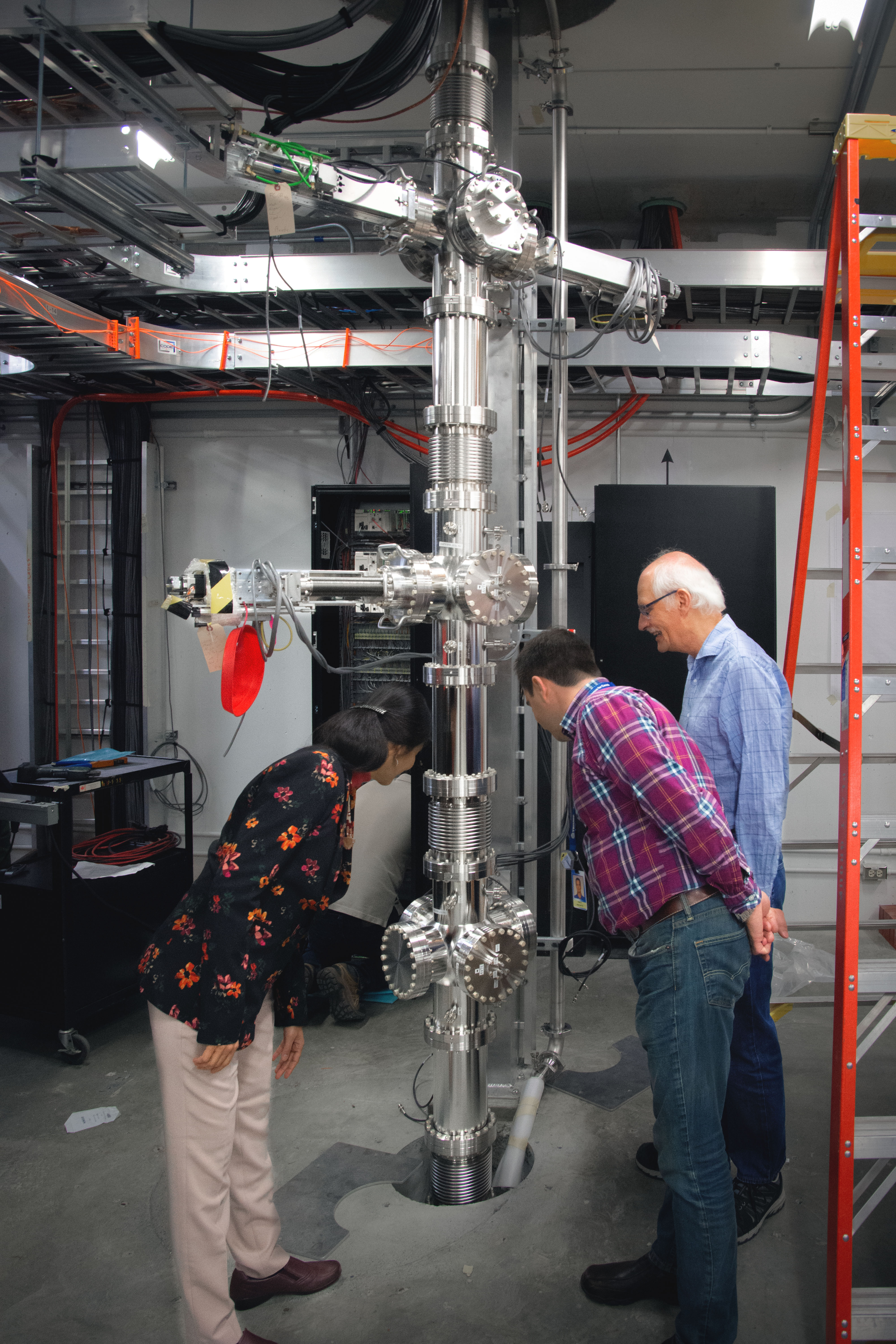 Marchetto emphasizes that the precision of the magnetic fields is but one of the many factors in the success of ARIEL’s beam delivery systems through the HRS. For example, the HRS design incorporates an electrostatic multipole between the twin magnets that plays an important role in tuning the beam shape. Because entering particles within the incident beam encounter the first magnet’s field at different angles, they exit the rectangular selection slit at corresponding, slightly different angles; in profile, the beam is shaped like the letter ‘S,’ with two ‘tails’ that risk being cut off, which reduces beam transmission.

The multipole’s field acts as a lens between the two magnets, molding the beam silhouette into a more uniform rectangle and greatly improving the transmission for a given mass selection slit size. 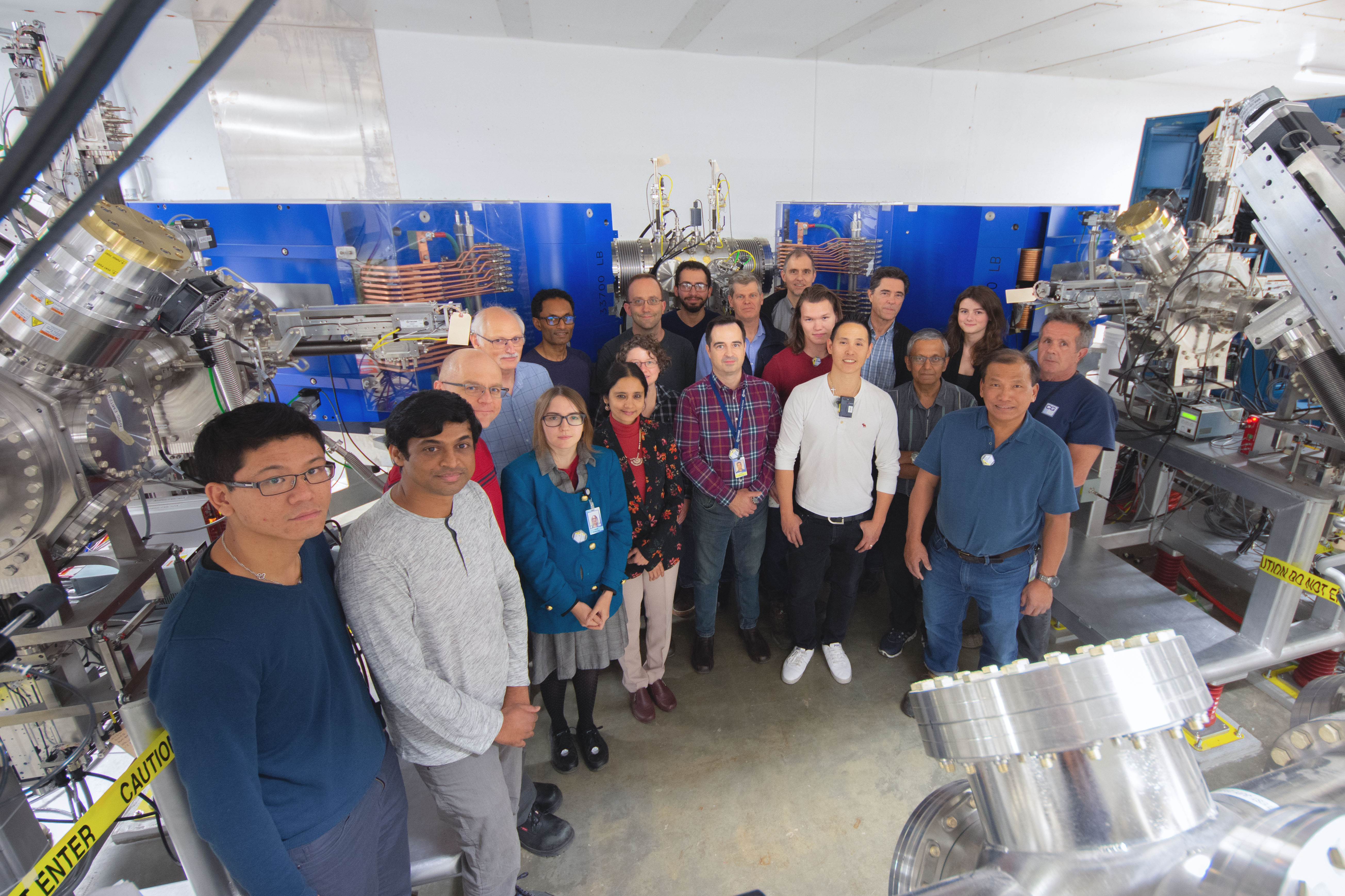 (Caption: Members of the ARIEL-CANREB team involved with the commissioning)

For the ARIEL-CANREB team, the commissioning results are an important validation of their work towards providing high-purity RIBs with ARIEL.

“This achievement is far more than the simple fabrication of a magnet and the corresponding beamlines,” said Kanungo. “Our team should be very proud of the impeccable design, precision fabrication and assembly, all of which led to this immediate success!”

“To see now that the magnet and beamlines are working, it’s just incredible,” added Marchetto. “We won’t be able to test the maximum performance of the system just yet, but to see beam through the HRS magnet – that’s very exciting.”

Congratulations to the ARIEL-CANREB teams!