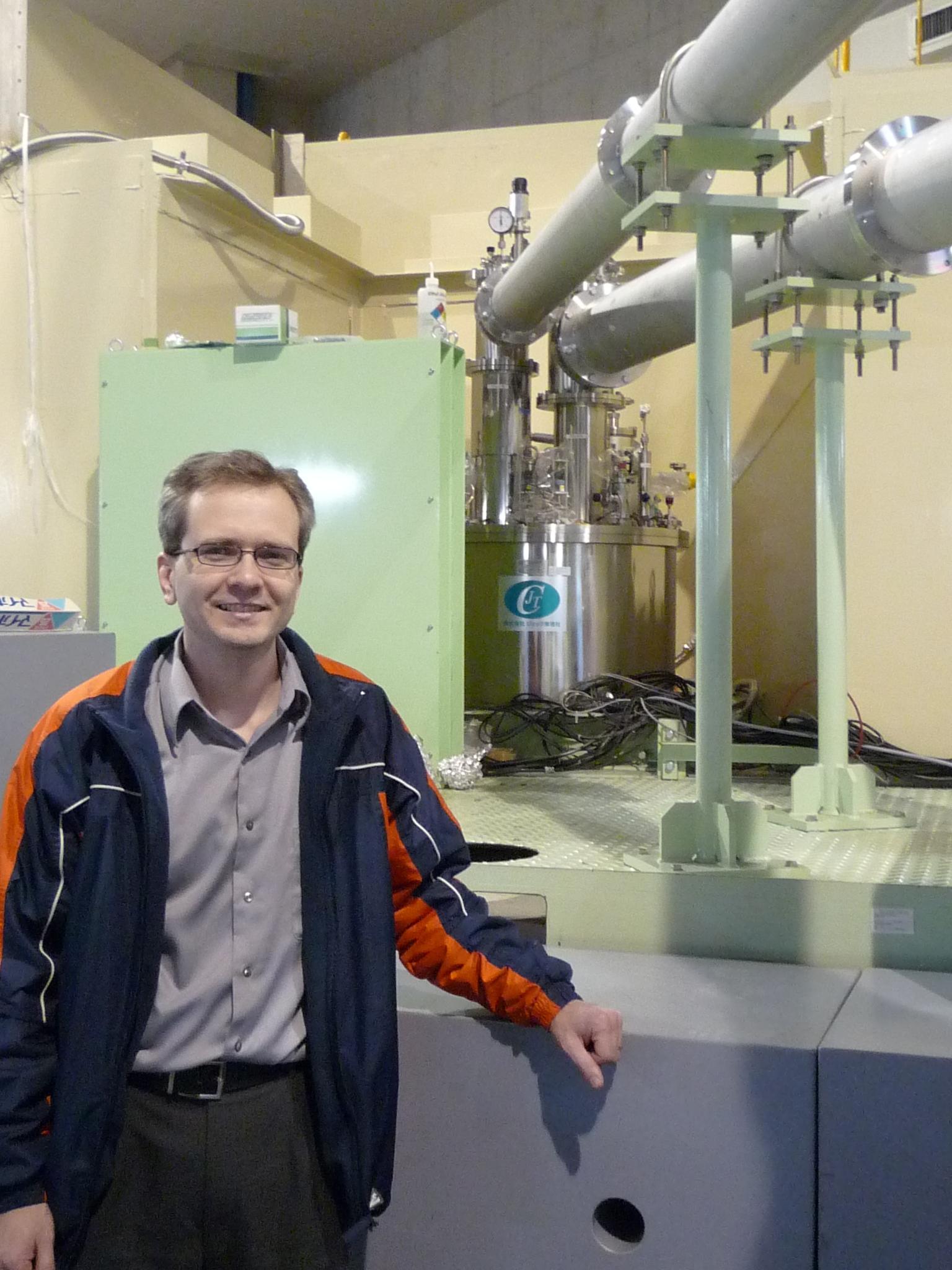 Professor Jeff Martin with the prototype UCN source in Japan

The Japan Society for the Promotion of Science (JSPS) recently announced that it has approved the grant application to fund a new international user facility for Ultra-Cold Neutrons at TRIUMF. The project is a collaborative effort among over a dozen Japanese, Canadian, and US Institutions. Last year, the project completed several reviews at TRIUMF by world experts.  The project was highlighted in the TRIUMF 5-Year Plan as a university initiative led in Canada by the University of Winnipeg and the University of Manitoba.  The group was encouraged to seek funding for the project through the Canadian Foundation for Innovation New Initiatives Fund (CFI NIF) and other Japanese and international sources.

JSPS has approved a total equivalent to $5 million Canadian, which the CFI is expected to match in a decision to be announced before the end of June. "This is the second time in TRIUMF's history that the Japanese have put forward funding for a Canadian project before any funding was finalized by the Canadian government; the first example was TRIUMF's M9 beam line," said Tim Meyer, Head of Strategic Planning and Communications for TRIUMF. "The Japanese are proving to be excellent partners in this endeavor," added Professor Jeff Martin, project partner at the University of Winnipeg.

As a result of this funding announcement, the Japanese component of the project has already begun to move forward with activities for explicitly siting the project at TRIUMF. These developments will take place over the next two years, with efforts in Canada getting under way as soon as federal funding is secured. According to Professor Martin, the group is in the process of planning for a UCN data-taking run this July in Osaka, Japan. "The new data we acquire will help us to address some of the few remaining design questions for the source that would be built at TRIUMF."

Ultra Cold Neutrons (UCN) are free neutrons that are moving very slowly (typically less than 30km/h!), due to their low energies. "UCN are interesting," explained Professor Martin, "because, unlike fast-moving neutrons, they are totally reflected from surfaces of a variety of materials. This means that they can be stored in bottles for an extended period of time (hundreds of seconds), allowing researchers to measure their fundamental properties for much longer than they could using earlier techniques."

When completed, the UCN source at TRIUMF will provide the highest density of UCN in the world. It will enable a new generation of experiments on the fundamental interactions of neutrons to be conducted with higher precision than ever before. For example, the UCN source will allow experimenters to precisely measure neutron beta decay and quantum levels of neutrons in Earth's gravitational field. The new UCN source will also facilitate the search for the non-zero neutron electric dipole moment (nEDM). This source will make a major impact on studies of fundamental physics with UCN that would complement and enhance the existing ISAC program at TRIUMF.

"The TRIUMF UCN source would be a world-leading facility which would bring in a new set of international users.  The Japanese funding commitment is clear evidence of this," said Professor Martin.