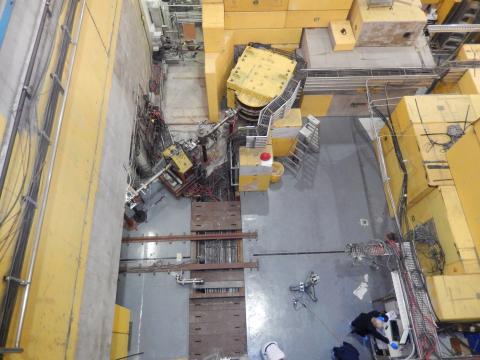 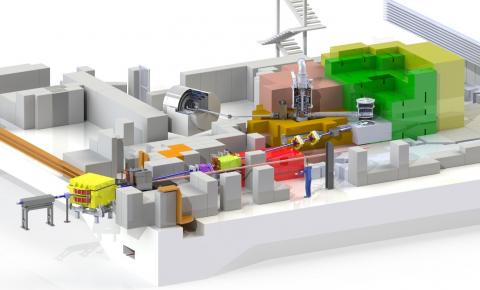 The cyclotron may be in its annual shutdown period, but the Meson Hall is busier than ever as the Ultra-Cold Neutron (UCN) project kicks off the construction of their state-of-the-art experimental area. The work currently underway is a product of extensive planning and constitutes a significant step forward in the project’s development. Upon completion, the UCN facility will produce the highest density of UCN in the world and enable a new generation of experiments into the fundamental interactions of neutrons.

Protons from Beam Line 1A will be diverted into the UCN beam line and sent into a tungsten spallation target, shattering the tungsten nuclei into protons, neutrons, and other subatomic particles.  The charged particles will quickly be stopped in the surrounding shielding material, leaving fast-moving neutrons which will then be slowed to ultra-cold speeds and directed into the UCN experimental area (located in the former M13 area).

Work has begun on the installation of 1/3 of the central beam line, necessitating a massive “excavation” of shielding blocks in the southwestern segment of the Meson Hall (pictured at right) - a process which yields some new discoveries of its own. The shielding had not been moved since 1978, so UCN project members had to work with limited information when making their plans.

“In some ways, it's like home renovation,” explains Larry Lee, UCN Project Manager. “You don’t really know what’s there. We had to complete our designs knowing that when we exposed things, the geometry might not be exactly the same.”

UCN team members used 3D engineering software to create a model based on old drawings but were prepared for some unknowns when they got to the bottom of the blocks. In addition to design challenges, there is also the logistical difficulty of moving such enormous slabs of concrete. The biggest ones had to be removed by crane and placed on flatbed trucks in the loading bay, to be transported to an empty lot on site until they are needed again. The smaller ones will have to be re-shaped or replaced to accommodate the new beam line configuration.

Another obstacle the team has had to contend with is the infamous “immovable block” (depicted in red in the diagram). The block is located underneath the support system for the M15 beamline (which travels vertically up the wall), so it literally could not be moved. However, the new beam line needs to travel through that area. Unable to go around the block, they had to go through it, coring a 6-inch hole through the cement. This task was made easier with the use of a laser tracker, which pinpointed the area to be cored to an accuracy of better than 0.1 mm.

With that formidable task behind them, the UCN team will now proceed to install the support stands for the beam line equipment, as well as the septum and dipole magnets. By the end of March, all of the concrete shielding will be returned to place and efforts will shift to the design of the spallation target and the reconfiguration of the former M13 experiment area. When the next shutdown period rolls around in December, the team will focus on decommissioning the M13 beam line and completing the remaining front and back sections of the UCN beam line. In the third year, the spallation target and its shielding pyramid will be installed, preparing the facility to receive its first protons in late 2016 or early 2017.

Congratulations to the whole UCN team for this advancement! In your capable hands, the project moves one step closer to completion.