A Visit to Higgs-Hunting Headquarters 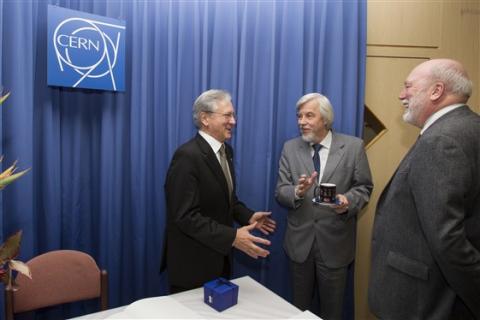 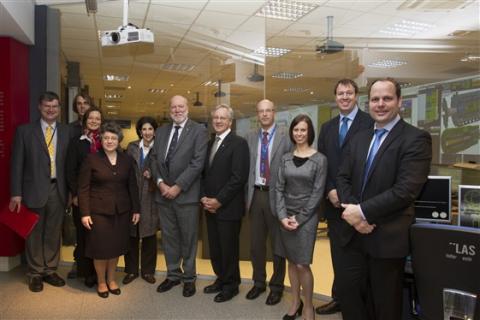 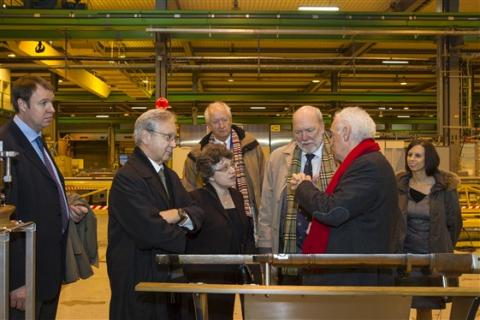 In late November 2012, senior stakeholders in Canadian science visited CERN in Geneva, Switzerland, for two short, action-packed days that might influence the future of the country. Their mission was not to find the Higgs boson (we think that's already been done) or study anti-hydrogen or trap exotic isotopes, but rather to better understand the inner workings of the international scientific partnership between CERN and Canada. As Canada examines the possibility of a formalized relationship (called associate membership) with the world's largest laboratory for particle physics, this fact-finding mission was a key step in those developing discussions. Paul Young, chair of the TRIUMF Board of Management and Vice-President, Research, at the University of Toronto, was joined by Gilles Patry, President and CEO of the Canada Foundation for Innovation. They were accompanied by several Canadian physicists and TRIUMF scientists throughout their visit.

CERN is connected with TRIUMF and Canadian scientists and students on many fronts. The itinerary focused on the chief activities: high-energy particle physics, rare-isotope beam science, accelerator science and technology, antimatter and antihydrogen science, advanced grid computing and networking, and science outreach and education.

Starting the day early on Monday, the visiting team began with a briefing on CERN's activities. The team met with CERN Director General Rolf Heuer, Head of International Relations Felicitas Pauss, and Rudiger Voss from the International Relations Office. Launched in the 1950s, the laboratory was established by treaty and represents a primary resource both for Europe's research strategy in particle and nuclear physics and for European aspirations in the innovation and development of novel technologies that will transform our daily lives. Over the past decade, CERN has established itself as a global resource that supports and expands the research capabilities of many different countries. Part of this visit was to examine the evolving relationship between CERN and Canada in a truly global context. For instance, CERN was just granted Observer Status in the United Nations. What formal arrangements are needed or appropriate as "the world becomes flat" and the traditional concentrations of talent and resources become more and more widespread?

The group toured the CERN Control Centre, the "brain" and "bridge" of CERN that oversees all activities. They then visited the rare-isotope beams facility stewarded by the ISOLDE Collaboration. Led by Magdalena Kowalska (ISOLDE physics coordinator) and Maria Garcia Borge (ISOLDE spokesperson), the visitors learned about CERN's isotope programs and the shared science goals and technological approaches with TRIUMF. ISOLDE at CERN and the ISAC complex at TRIUMF can be seen as regional facilities in Europe and North America. With 40 years of operational experience, ISOLDE has developed many techniques for targets and ion sources, where ISAC is unique with the highest beam power for isotope production. The Canadian visitors could get first hand impressions of ISOLDE's research program and learned about the weak interaction program from Paul Finlay from Guelph (now a post doctoral fellow at ISOLDE) and about the ISOLTRAP Penning trap program from a CERN fellow from Mainz and Stephan Ettenauer, formerly at TRIUMF and UBC and now a post doctoral fellow at Harvard University. It was clear that the two labs work closely and yet also compete for the best science that they can achieve.

Before lunch, the visitors toured the Low Energy Ion Ring (LEIR) facility and learned about research to produce beams of lead ions for nuclear physics at high energies in the realm of quark-gluon liquids.

The Canadian team then toured the ATLAS Visitor Centre and met with the management team of the international experiment including Fabiola Gianotti, Dave Charlton, and Peter Jenni. Visiting the LHC superconducting magnet test hall, the group met with head of CERN's Technical Department Frederick Bordry. They learned about upgrade plans for the main accelerator and the path to higher power and more physics. If that wasn't enough, the visitors then attended a business dinner on the French side of CERN to discuss the aspirations of CERN over the next 10-20 years and the anticipated role of various nations.

The group then visited several of CERN's computing facilities and learned about the role of the Canadian ATLAS Tier-1 Data Centre in sharing and processing the ATLAS physics data while supporting the overall global team of scientists and students. Canadian scientists presented an overview of Canada's involvement in the LHC, ATLAS, and the recent Higgs analyses. After lunch, the pair met with a dozen Canadian students and post-doctoral fellows working at CERN for the term and got a glimpse of the value of international science training and education. Doug Schouten (TRIUMF postdoc), Estel Perez (TRIUMF postdoc), Alex Koutsman (TRIUMF postdoc), and Simon Viel (TRIUMF/UBC student and a Vanier scholar) participated. Professors Young and Patry were particularly impressed with the energy and enthusiasm of the young scientists and their commitment to both Canada and the global research effort.

To close off the day, the Canadian team toured CERN's Globe of Science and Innovation and saw how the laboratory directly engages the public. By 5pm, they were headed to the airport and back to Canada, heads full of facts, figures, and impressions.

At TRIUMF, we salute the interest and attention of our stakeholders in the Board of Management and the supporting agencies especially CFI. And to our CERN collaborators and colleagues, we thank them for their impeccable hospitality and generous acknowledgement of the difference that Canadians make in the overall enterprise. We are proud to be a part of CERN and we look forward to a bright future.