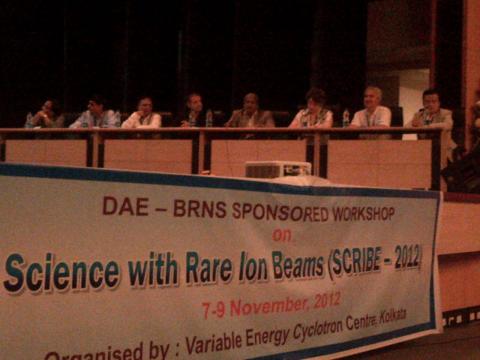 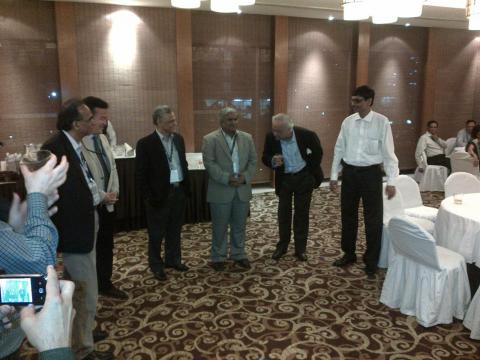 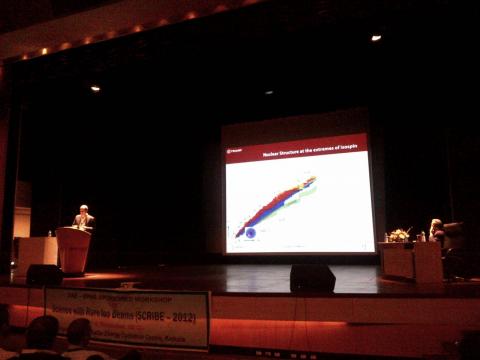 This past week, two of TRIUMF's mandates came together at a special conference in India: connecting Canada to the world and advancing isotopes for science and medicine.

The Variable Energy Cyclotron Centre (VECC) in Kolkata, with support from India's Department of Atomic Energy, organized an international conference called Science with Rare-Ion Beams (SCRIBE).  The conference pulled together rare-isotope science experts from across India, Asia, Europe, and North America to discuss the opportunities for a major new facility developing in India called ANURIB (Advanced National facility for Unstable & Rare-Isotope Beams) to be constructed in the Rajarhat area of Kolkata. The ANURIB facility exploits similar accelerator technologies as Canada's ARIEL facility and, hence, TRIUMF and VECC have been collaborating closely for the past five years.  The first phase of work for ANURIB is proposed as a key element of the 12th Plan being considered by India's Parliament; formal approval could be as soon as the end of this calendar year.

At the conference, TRIUMF's director Nigel S. Lockyer gave a talk about managing a new international facility;  TRIUMF's head of the Science Division Reiner Kruecken presented an overview of rare-isotope science.  Head of TRIUMF's Accelerator Dvision Lia Merminga shared an update on both the ARIEL project as well as the status of the collaborative development of the superconducting linear accelerator.  Ankur Chaudhari, a post-doctoral fellow with Jens Dilling on the TITAN experiment,  talked about the latest mass-measurement results and their scientific implications.

The closing session of the conference was based around an international panel discussion chaired by the incoming VECC director Dinesh Srivastava.  Other participants included Alok Charakbarti, the ANURIB project leader, and representatives from Japan's RIBF facility, France's SPIRAL-2 facility and ALTO facility, and Lia Merminga from TRIUMF along with several representatives from India's domestic community such as at IUAC in Delhi.  The international community affirmed the value and importance of the ANURIB initiative while emphasizing that its long-term impact would depend largely on timely approval, development, construction, and operation.  Dr. Chakrabarti said that with ANURIB, India is "poised to take off" in the field of rare-isotope beams. Dr. Srivastava commented that VECC was looking forward to mobilizing all of the university collaborators across India and around the world to take full advantage of ANURIB.  Marek Lewitowicz of GANIL added that many nuclear-physics experiments (i.e., detectors) are mobile and could be brought to ANURIB beam lines for key measurements.

The agenda for the SCRIBE 2012 conference can be found here.  This inaugural conference was motivated by advice from ANURIB's International Advisory Committee, chaired by Nigel S. Lockyer.  It is expected to become a regular event as ANRUIB moves toward fruition.

We salute our ambitious and accomplished partners across the Pacific.  May ARIEL and ANURIB together reveal the secrets of the universe!

--by T.I. Meyer, TRIUMF's Head of Strategic Planning and Communication