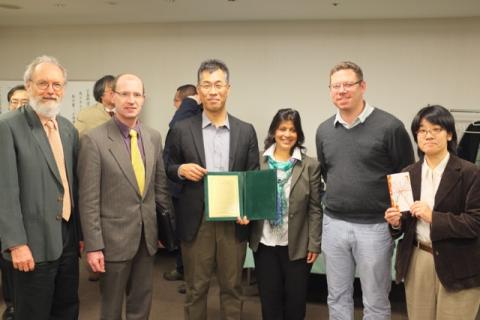 The J-PARC Neutrino Beam Group, which includes the Canadian T2K collaborators, has been honoured with the 2013 Suwa Award in recognition of their contribution to the development of high-energy accelerator science. The award, presented last week at a ceremony in Japan, was created to recognize researchers, engineers, and research groups who have made long-term and internationally acclaimed achivements in the development of high-energy accelerator science. The J-PARC Neutrino Beam Group was celebrated for their successful production of the world’s highest-intensity neutrino beam, the crucial ingredient used by the T2K experiment in their groundbreaking study of neutrino oscillations.

The Japan Proton Accelerator Research Complex, called J-PARC, produces the muon neutrino beam in its facility in Tokai, located on Japan’s east coast. The beam is monitored by a nearby detector complex and aimed underground at the Super-Kamiokande detector near the west coast of Japan, 295 km away. This summer, the experiment confirmed definite observation of a new type of neutrino oscillation, in which muon neutrinos transform to electron neutrinos. This is a great advancement in the study of neutrinos, nature’s most elusive particles.

TRIUMF has been an integral part of the J-PARC Neutrino Beam Group since the project’s outset, contributing numerous components including the FODO optics of the primary beam line, the off-axis neutrino beam, and the remote handling systems for the target and final focus beam monitor. The Canadian T2K contingent (composed of researchers from TRIUMF, York University, and the University of Toronto) also contributed a novel optical transition radiation (OTR) beam monitor in front of the production target and took a leadership role in neutrino beam analysis.

"It has been more than a decade since the J-PARC neutrino team visited TRIUMF to learn from the ISAC target station design,” recalls Akira Konaka, TRIUMF research scientist with the T2K experiment. “After commissioning, we would never be able to get close or look directly at the components around the target, and thus very careful design was required beforehand. It was a stimulating and exciting experience to work with world leading experts in target and remote handling systems from TRIUMF, RAL, and KEK, passionately discussing every detail of the design to make sure the system works.”

The project was not without its challenges, the most significant of which was the 2011 Tohoku earthquake off the Pacific coast of Japan. The collaboration quickly regrouped after the crisis. “Even with the catastrophic earthquake in 2011, we were able to recover very quickly,” explains Konaka. “Examination of components in the remote handling cell contributed by TRIUMF and the realignment of the target by the OTR monitor certainly were a key part of this."

The Suwa Award is given by the Foundation for High-Energy Accelerator Science in memory of Shigeki Suwa, the first Director General of Japan’s National Laboratory for High Energy Physics (now KEK).  The award was accepted on February 17, 2014 by Takashi Kobayashi, head of the Particle and Nuclear Physics Division of J-PARC, on behalf of all members of the Neutrino Beam Group.

Congratulations to the TRIUMF T2K team members for this well-deserved honour!

For more details on the T2K experiment, visit www.triumf.ca/t2k