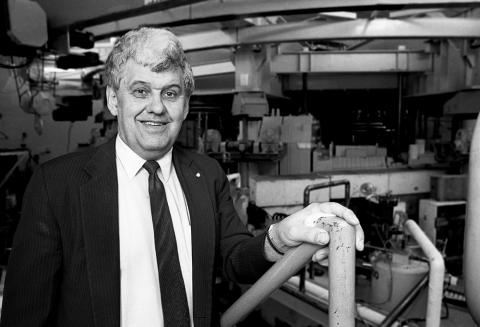 Friends of former TRIUMF director and co-founder Erich Vogt reunited on February 6th and 7th to celebrate the life of a true renaissance man who passed away a year ago. Some fifty colleagues from TRIUMF and its affiliated universities, worldwide collaborators, former students and postdoctoral fellows joined with two of Erich’s sons, his daughter-in-law and his grandson (pictured below) at the University Golf Club to recall the scientific legacy of a brilliant scientist, teacher and leader at the Science Symposium and to exchange fond memories over dinner of a notorious bon vivant, motivator and avid gardener.

Sponsored by TRIUMF, UBC and NORDION, the Symposium was structured primarily around the national and international collaborations that Erich nurtured throughout his career, with many international colleagues sharing a rich history of challenges and achievements they experienced in partnership with Erich. The talks (available at the bottom of this webpage) covered various aspects of TRIUMF’s science program and showed how the seeds Erich planted and nourished in the 60’s and 70’s led to the multidisciplinary and internationally recognized science program Canada enjoys today.

In the opening statements, John Hepburn, Vice President Research and International at UBC, paid homage to Erich’s career as a UBC professor of physics, as administrator and TRIUMF founder and its 3rd director. TRIUMF’s 8th and present Director, Jonathan Bagger, remarked that he wished he had met Erich and so was eager to learn more of the history and fabric of the laboratory he recently began leading. 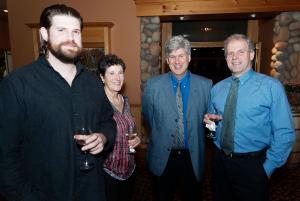 Jens Dilling, deputy head of the science division at TRIUMF on sabbatical in Heidelberg, began the proceedings by describing Erich’s impact on the nuclear physics program at the lab.  It was his interest in nuclear astrophysics and consequent approval and funding for a small isotope research test facility (TISOL) that laid the first cornerstone of the current ISAC program, a world leader in several areas of nuclear science with exotic isotopes. The new ARIEL facility will build on TRIUMF’s modern flagship research program, seeded decades ago with Erich’s vision.

In a session dedicated to the nuclear medicine program, UBC and TRIUMF emeritus Tom Ruth recalled the development of TRIUMF’s Positron Emission Tomography (PET) program and its collaboration with UBC’s Pacific Parkinson Centre. He emphasized Erich’s role in fostering PET, which has lead to PET being recognized as a clinical medical imaging modality in BC. In his talk, UBC and BC Cancer (BCCA) scientist Francois Benard described how this led to the BCCA investing heavily in a comprehensive PET imaging screening program benefitting thousands of BC patients. He also outlined how research hospitals exploiting state of art technology and engineering available at TRIUMF will lead to a made-in-BC solution to the production of Tc-99m, the most used tracer in medicine.  The session ended with Jerry Porter of NORDION Inc. describing their 37 year partnership with TRIUMF that began under Erich’s leadership, which is often cited as a model for university-industry relations.  He pointed out that 50 millions patients have been receiving procedures using isotopes from the TRIUMF site over the years. 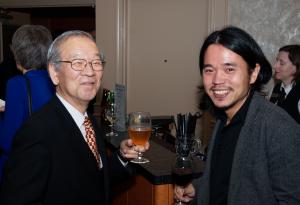 Several talks probed Erich’s influence internationally. Danny Ashery from Tel Aviv University shared how several Israeli groups used TRIUMF’s beams to study pion-nuclear physics and how the TRIUMF environment was perfect for training graduate students and accommodating international visitors. This fruitful exchange continues today with Danny’s involvement in the TRINAT program at ISAC. Bates Laboratory Director and MIT professor Robert Redwine outlined the contributions of the meson factories (LAMPF, SIN/PSI, TRIUMF) in the studies of the pion-nuclear strong interaction. He thanked Erich for his leadership in evaluating US laboratories and physics departments and contributing to the strong research linkages between Canada and the US. He brought greetings from long-time friend Ernie Moniz, now Secretary of the US Department of Energy, and MIT theoretical physicist John Negele, who co-edited with Erich  27 issues of the Annals of Nuclear Science journal.  Erich’s seminal role in making strong connections between TRIUMF and Japanese science were celebrated by University of Tokyo emeritus Toshi Yamazaki (pictured, with Makoto Fujiwara) who pointed out that TRIUMF’s first PhD was obtained by a Japanese student from Professor Yamazaki’s group. These connections led the University of Tokyo to contribute the M9B superconducting muon channel years ago, while today a new Ultra-Cold Neutron source from an innovative KEK/Osaka design is on its way. Erich’s fight for the KAON Factory in Canada led ultimately to its establishment in Japan as J-PARC, where Yamazaki’s group recently published results on high-density nuclear matter formed by kaon binding which built on studies developed during the KAON Factory campaign. He was followed by Professor Ken Nagamine (UC Riverside/Riken) who explained that Erich’s strong support for muon science, and mSR in particular, was the impetus behind the development of a mSR program at the KEK booster in the late 70’s. This spurred the establishment of a strong Japanese material science program which continues to flourish today. 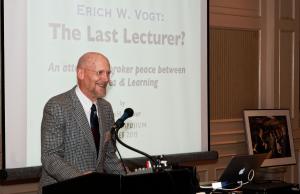 The Symposium was closed with an inspiring talk about Erich’s passion for undergraduate teaching. UBC Professor Jess Brewer (pictured), who co-taught first-year honours physics with Erich for more than 10 years, explored the reasons for Erich’s success as a much-beloved teacher. He showed that modern teaching methods with advanced technologies can be effective, but to reach beyond the top students requires charisma and a passion for communicating the wonders of science, two attributes Erich possessed in abundance.

The reception dinner the night before the Symposium brought out stories of Erich’s community partnership vision which complemented that for global science. Barbara Brink, founder and former CEO and president of Science World, recalled her partnership with Erich in raising funds to establish Science World in its present “Buckminster globe” location, establishing it as a key cultural venue in Vancouver. A love of science, teaching and children motivated her and Erich to form an unstoppably formidable team. Later, Haig Farris, “Mr Venture Capital West” and entrepreneur extraordinaire, described how he interacted readily with Erich to raise the profile of pure science as a key driver of advance technologies and as a platform to breed innovation.

The legacy of Erich Vogt was celebrated by his many friends in a joyful atmosphere, which undoubtedly impressed the students, former students and postdoctoral fellows joining this TRIUMF family. Erich exemplified a true renaissance man with a broad education, unmatched motivation and exemplary people skills. The Vogt family members were very touched to witness the extent of Erich’s impact at home and abroad.  As a tribute to Erich’s teaching legacy, the Erich Vogt First-Year Student Research Experience was promoted to raise funds for increasing the number of summer research scholarships available for first-year science students. Walter Wassermann, the first recipient of this scholarship, attended the meeting and will soon be joined by new winners.

View high-resoltuion photos from the symposium and dinner at TRIUMF's Flickr page.

D. Ashery "40 Years with Erich: From Pions to Weak Interactions"

R. Redwine "Pion-Nucleus Physics at the Meson Factories and MIT"

T. Ruth "From Vision to Seeing"

J. Brewer "The Last Lecturer: An attempt to broker peace between lectures and learning"