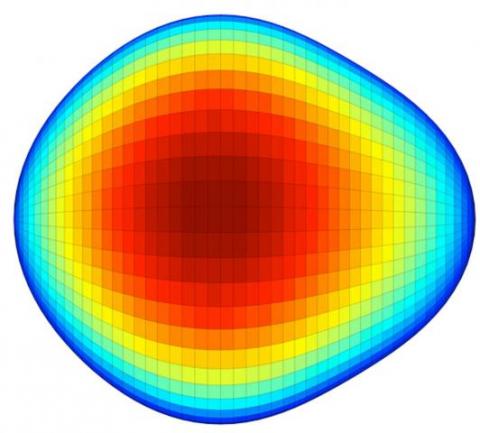 An international team at the ISOLDE rare-isotope-beam facility at CERN has shown that some atomic nuclei can assume asymmetric, "pear" shapes. The observations contradict some existing nuclear theories and will require others to be amended. The results were published in the journal Nature on 9 May 2013.

Most nuclei have the shape of a rugby ball. While state-of-the-art theories are able to predict this behaviour, the same theories have predicted that for some particular combinations of protons and neutrons, nuclei can also assume asymmetric shapes, like a pear. In this case there is more mass at one end of the nucleus than the other.

Until now, it has been difficult to observe pear-shaped nuclei experimentally. However, a technique pioneered at ISOLDE has been used successfully to study the shape of the short-lived isotopes radon-220 and radium-224.

Physicist Peter Butler of the University of Liverpool said, "We have been able to show that while radium-224 is pear-shaped, radon- 220 does not assume the fixed shape of a pear but rather vibrates about this shape. The details of these findings are in contradiction with some nuclear theories and will help others to be refined."

Reiner Kruecken, head of TRIUMF's Science Division, commented, "This is an important measurement and it provides guidance for the RadonEDM project at TRIUMF. Congratulations to the team!"  TRIUMF is pursuing a follow-up study using its own rare-isotope beam facilities. "It will be important to follow up with further spectroscopy on the candidate isotopes.  April 2013 demonstrations of the TRIUMF Ion-Guide Laser-Ion Source have shown that we are on track produce the clean beams necessary for significantly advancing these studies," he added.

The experimental observation of nuclear pear shapes is not only important for understanding the theory of nuclear structure but also because it can help experimental searches for electric dipole moments (EDMs) in atoms. The EDM relates to the the separation of positive and negative charges within the atom. The Standard Model predicts that the value of the EDM for the atom is so small that it will lie well below the current observational limit.

However, many theories that try to refine this model predict EDMs that should be measurable, which could indicate new physics beyond the Standard Model. To test these theories, experiments looking for the EDM will have to be improved, and one of the potential improvements is to use exotic atoms whose nucleus is pear-shaped. Quantifying this shape will therefore lead to constraints on the feasibility of experimental programmes searching for atomic EDMs.

"Our measurements will help direct the searches for EDMs currently being carried out in North America and in Europe, where new techniques are being developed to exploit the special properties of radon and radium isotopes," said Butler. "Our expectation is that the data from our nuclear physics experiments can be combined with the results from atomic trapping experiments measuring EDMs to make the most stringent tests of the Standard Model."

CERN's Director of Research and Scientific Computing, Sergio Bertolucci said, "The fact that high-quality beams of energetic, radioactive radon and radium ions can be produced of sufficient intensity to carry out these experiments is testament to unique capabilities of CERN and, in particular, the expertise of the teams developing these beams at ISOLDE."

-- based on an InterActions press release from CERN