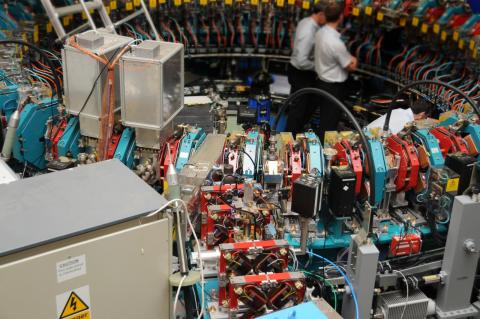 In a result announced in January 2012 and now celebrated on the cover of the prestigious journal  Nature Physics, TRIUMF scientists have contributed to the first experimental demonstration of a new type of particle accelerator. This prototype non-scaling FFAG (fixed-field alternating­-gradient) accelerator, EMMA, was built at the UK's Daresbury Laboratory to accelerate electrons from 10‑20 MeV, using the existing ALICE accelerator as the injector.

FFAG accelerators are a type in which the magnetic field in the bending magnets is constant during acceleration. This means the particle beam will move radially outwards as its momentum increases. A non-scaling FFAG is one in which a quantity known as the betatron tune is allowed to vary unchecked. In a conventional synchrotron such a variation would result in loss of the beam as the tune hits various resonance conditions. However, in EMMA the beam crosses these resonances so rapidly that their effect should not be (and is not) seen. The cover illustration displays another novel feature of this type of non-scaling FFAG (also verified with EMMA) – “serpentine” acceleration, where the particle bunches follow an S-shaped path on a plot of energy versus discrepancy in synchronism.

EMMA is a proof-of-principle machine; the experience gained in building this machine will be useful for future muon accelerators (needed for neutrino factories and muon colliders), and also for proton and carbon ion accelerators, which have applications for cancer therapy.

Non-scaling FFAGs will also be good candidates for use in Accelerator-Driven Subcritical Reactor systems, in which a non-critical fission core is driven to criticality by a small accelerator. Future electrical power generation could be influenced heavily by the use of power stations consisting of a sub-critical core containing a material such as thorium, and an accelerator capable of providing extra neutrons via a spallation target.

The authors, including TRIUMF's Shane Koscielniak (whose sketch was the inspiration for the cover design) and Yi-Nong Rao, and TRIUMF/UBC's Michael Craddock, wrote:

"Conceived in the 1950s, FFAGs are enjoying renewed interest, fuelled by the need to rapidly accelerate unstable muons for future high-energy physics colliders. Until now a 'scaling' principle has been applied to avoid beam blow-up and loss. Removing this restriction produces a new breed of FFAG, a non-scaling variant, allowing powerful advances in machine characteristics. We report on the first non-scaling FFAG, in which orbits are compacted to within 10 mm in radius over an electron momentum range of 12–18 MeV/c. In this strictly linear-gradient FFAG, unstable beam regions are crossed, but acceleration via a novel serpentine channel is so rapid that no significant beam disruption is observed."

What does this imply?

Today's existing accelerators have already had a profound beneficial impact upon society, with their wide range of uses in industry, medicine and basic science---including development of MRI and X-rays. But they operate on principles developed over 50 years ago and their potential is limited by their sheer size, complexity, and cost.

EMMA represents a breakthrough. Based on innovative concepts never tried before, EMMA's technology can provide far more intense beams at an adjustable energy, allowing the more widespread use of accelerators to tackle some of the most difficult problems facing society. The beneficial role of nuclear-particle therapy of cancers, particularly in the treatment of radiation-resistant and awkwardly sited tumours, is well known. It is therefore hoped that in the future this technology will allow hospitals to implement a newer and more effective form of beam therapy to help cure some of the most difficult cancers.

Engineered and constructed at the UK Science and Technology Facilities Council's (STFC) Daresbury Laboratory, EMMA was designed by an international consortium of scientists as part of the CONFORM project, which includes the Universities of Manchester, Oxford, Surrey, Imperial, Brunel, Liverpool and Huddersfield, STFC, the Cockcroft and John Adams Institutes, as well as a number of international partners which include the Brookhaven National Laboratory and Fermilab in the U.S., and TRIUMF in Canada.

EMMA's ground-breaking concept is based on a ring of magnets which use their combined magnetic field simultaneously to steer and focus the electron beam around the machine. The strength of this magnetic field (counterintuitively) decreases steeply as the beam spirals outwards while it is accelerated to 20 million electron volts around the ring. Due to this decrease, the width of the spiral is much smaller than in any equivalent accelerator. As a result, EMMA's ring of magnets is much more compact and it is easier to accelerate the beam.

Congratulations to the international team and especially the TRIUMF contributors under the leadership of Shane Koscielniak!  Shane played a major role in selecting EMMA's magnet lattice structure, radiofrequency parameters, and beam-diagnostic instrumentation.