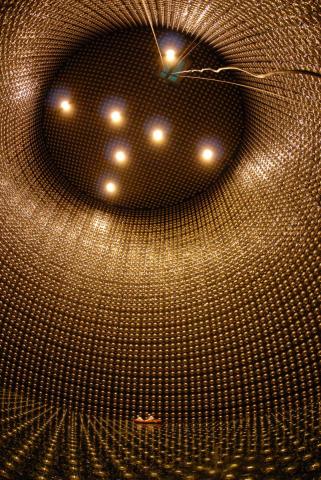 A new result published this week by the T2K collaboration brings researchers one step closer to answering one of the greatest puzzles of particle physics: why is there more matter than antimatter in our universe?

According to the Standard Model, matter and antimatter are created in pairs; however, the world around us is composed of matter alone, an imbalance that dates back to moments after the Big Bang. Researchers with the T2K experiment, including a team of TRIUMF scientists, are exploring possible explanations for this discrepancy through the study of neutrino oscillations using the Super-Kamiokande detector in Japan.

When neutrinos interact, they can produce the charged lepton to which they are partnered, allowing researchers to identify what flavour the neutrino is (either electron, muon, or tau). One interesting feature of neutrinos is their capacity to change flavour, a phenomenon known as neutrino oscillation. The T2K experiment studies muon neutrino oscillations by sending a muon neutrino beam on a 295 km journey beneath Japan and searching for electron neutrino appearance in the detector at the end.

In 2011, the T2K team published their first results, which indicated that muon to electron neutrino oscillations do occur. In the years since, they have continued to collect more data, recording 28 electron neutrino events by the summer of 2013. With this data, researchers have been able to provide the first direct information on one of the most interesting mathematical parameters governing this occurrence, the CP violating phase δ. 'CP violating' means that the δ affects matter and antimatter differently, so neutrinos may oscillate differently to antineutrinos depending on the value of δ. If this is seen, it provides a clue to the universe's matter-antimatter asymmetry.

The probability of muon to electron neutrino oscillation depends mainly on the value of the mixing angle θ13 and the CP violating phase δ. Using constraints on θ13 established by other experiments in combination with the T2K observed electron neutrino data, the T2K team has calculated the different values of δ that could produce the electron neutrino events they observe. This result was published this week in Physical Review Letters as a 90% exclusion region (meaning that if the T2K experiment was repeated many times, only 10% of these repeated measurements would fall inside this excluded region). With these results, the T2K experiment currently places the most stringent constraints on delta CP.

The T2K experiment did not initially expect to be able arrive at this result so soon. "We thought that the next generation of neutrino experiments would start exploring delta CP," explains Mark Scott, a T2K postdoctoral fellow at TRIUMF. "To be doing so now is very exciting."

A new reconstruction algorithm developed by TRIUMF postdoctoral fellow Mike Wilking and his Canadian co-workers was also instrumental in securing this result. This algorithm is used to reconstruct neutrino interactions based on the data recorded by photosensors inside the Super-Kamiokande detector. Wilking's algorithm identified one of the largest backgrounds in the experiment and effectively removed it from the analysis.

The next step for T2K is to improve the analysis and collect further data, with the goal of providing better constraints on the value of δ. This will inform future neutrino experiments, which may lead to the first observation of CP violation in the lepton sector. This discovery holds potential to explain the reason for the difference between matter and antimatter in the universe.

Congratulationsto the TRIUMF T2K team for this exciting result!

See the "Viewpoint on Physics" article for more information: http://physics.aps.org/articles/v7/15