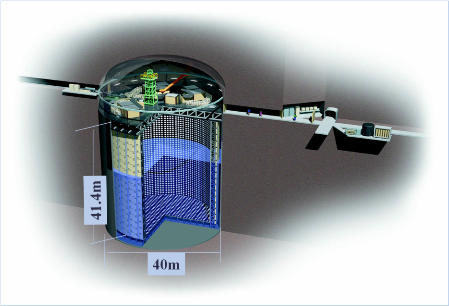 [Editor's Note: In today's story, the T2K experiment in Japan was scheduled to anounce its first physics results at 3pm Japan time on the fateful afternoon, Friday, March 11. The seminar never took place because of the devastating earthquake and tsunami that struck Japan. Out of respect for the host nation, the sequence of follow-on seminars and news stories were halted until the the collaboration was able to verify that no one was injured and that everyone was accounted for. It was only afterward that everyone turned their attention back to sharing the physics results that came from the first year of work. Today's news is a testament to the global partnership of science and the deep sympathy and support we all share with our Japanese colleagues.]

The T2K neutrino experiment presented its first physics results today, based on analysis of data taken in 2010. The T2K experiment uses a beam of muon neutrinos produced at the J-PARC accelerator laboratory in Tokai, Japan to study how neutrinos change flavours as they travel.

In a seminar at TRIUMF this afternoon, research associate Mike Wilking showed that muon neutrinos are unlikely to turn into electron neutrinos as they travel across Japan from J-PARC to the Super-Kamiokande detector 295km away. The total number of muon neutrinos reaching Super-K was however reduced by an amount consistent with previous studies of neutrinos. These results demonstrate that T2K can successfully measure neutrino oscillations using its near and far detectors. By the end of this year T2K will have taken enough data to exceed the current world limits on the fraction of electron neutrinos appearing in its beam. The rate at which muon neutrinos can change into electron neutrinos is a major unanswered question about neutrinos that is the focus of a worldwide effort.

TRIUMF hosts one of the largest T2K groups in the collaboration, and has made significant contributions to T2K's beamline, near detector, beamline monitoring, and analysis. One of T2K's two Tier 1 Data Centres is also located at TRIUMF. T2K uses the concept, developed at TRIUMF in the 1990's, of an off-axis neutrino beam, in which the beam is aimed a few degrees away from the detectors in order to get a more favourable energy spectrum. T2K is the first realization of such a beam, which is behaving as predicted.