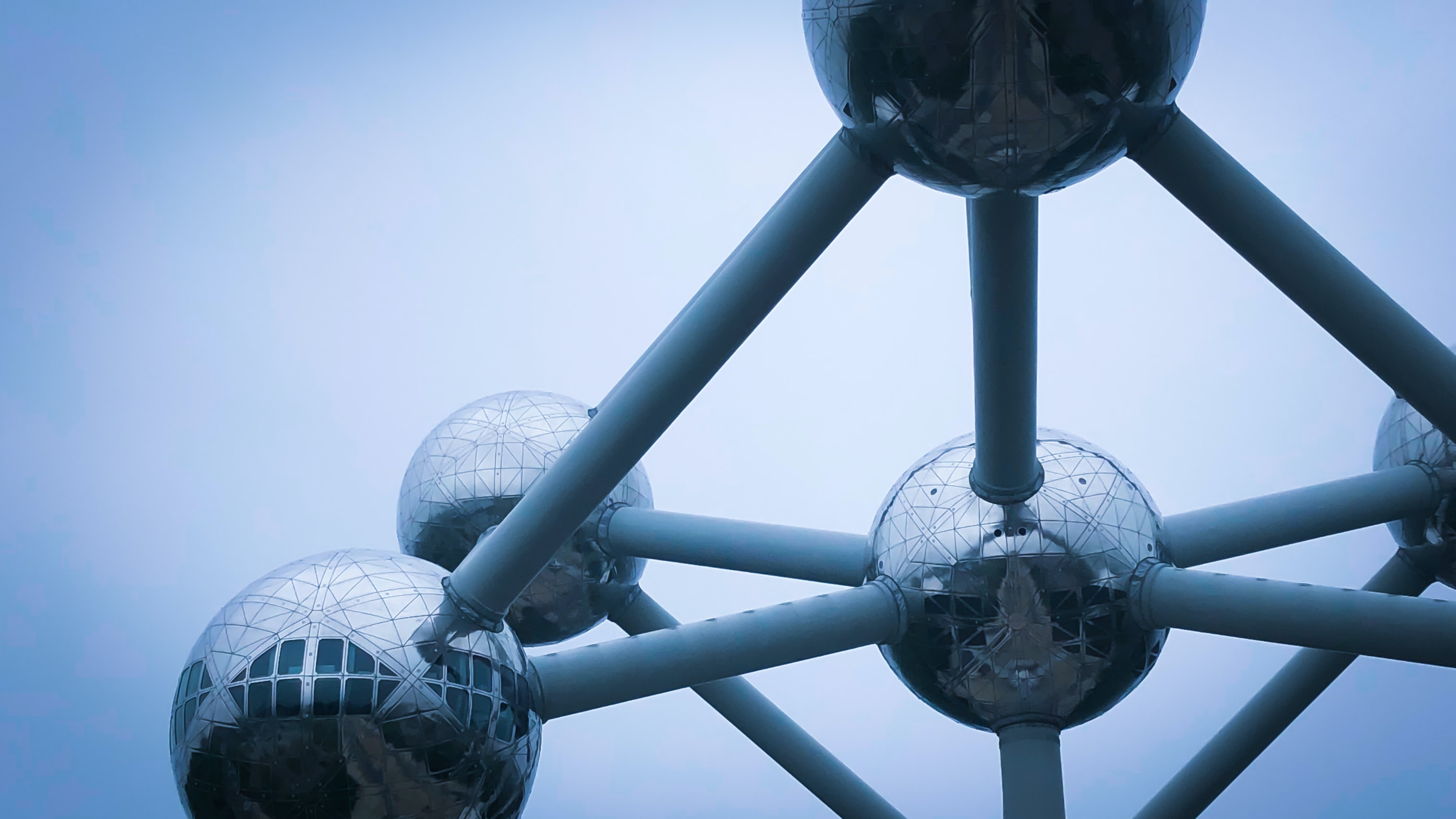 A new paper published by TRIUMF Theory Department scientist Jason Holt and colleagues from the University of Washington and Germany has provided first-principles predictions of which isotopes can and can’t exist for elements from helium to iron, expanding our understanding of how matter arises from the fundamental forces of nature and charting a path for future research into the unexplored regions of nuclei.

In the publication 'Ab initio limits of atomic nuclei', Holt and collaborators applied a novel ab initio many-body approach developed at TRIUMF to calculate the guardrails of existence that define the nuclear landscape – boundaries that are known as the nuclear drip lines. Their work brings new predictions for these thresholds spanning the light- and medium-mass regions, areas of the Periodic Table for which the drip line has yet to be fully explored experimentally. They also describe a framework for how to test their predictions at next-generation rare isotope beam facilities.

The paper was published today in Physical Review Letters as an Editor’s Suggestion with an accompanying Synopsis in the online magazine Physics.

Taking it to the limit

At the heart of the atoms that make up our world lies the nucleus. From the billion-years-old nuclei that condensed seconds after the Big Bang to those continuously forged in star cores or supernovae, matter is primarily held together by the effect of the strong force, governed by quantum chromodynamics (QCD). The strong force is responsible for binding quarks to make protons or neutrons; it also ultimately unites protons and neutrons in the nuclei of atoms.

Though our understanding of how the nucleus works has grown by leaps and bounds in the last century, we do not yet fully understand how the strong force manifests itself at the scale of nuclei. Nevertheless, systematic low-energy theories of QCD, combined with state of the art many-body methods, have allowed us to predict how these interactions give rise to the properties of exotic unstable isotopes.

Among the many thousands of possible or hypothetical nuclei, only a couple hundred are stable, essentially living forever. Add or remove a few neutrons, and the nucleus becomes unstable and undergoes radioactive decay. Add or take away too many, however, and nuclei will cease to exist, unable to capture more protons or neutrons to form a bound system. Instead, they release or ‘drip’ energy in the form of the emitted neutrons or protons. Each element has two of these existence thresholds, the proton and neutron drip lines (the nuclear drip lines).

While the proton drip line has been experimentally established for many elements, the neutron drip line has been confirmed only up to neon. This is largely due to the tremendous experimental challenge both in creating and measuring properties of extremely neutron-rich nuclei. Significant computational power is also required to calculate the multi-body interactions within an unstable nucleus at or near the drip lines. Further, the computations become increasingly demanding for heavier elements. As such, finding a theoretical method for predicting where the proton and neutron drip lines exist represents a major frontier of research in modern nuclear physics.

“Modern physics has increasingly been about pushing our understanding of nature to the extremes,” said Holt. “In the coming decade, one of the major goals of rare-isotope beam facilities like TRIUMF will be to pin down the absolute limits of nuclei - in some sense, the frontiers of matter as we know it in the universe. But since the neutron dripline is known for only a handful of elements, this presents an exciting opportunity for theory to provide a roadmap into the unknown and help guide experimental efforts in the coming years.”

In 'Ab initio limits of atomic nuclei', Holt and his colleagues developed a novel theoretical framework to simulate almost 700 different isotopes between helium and iron (comprising nearly every possible nucleus within this range) starting from only the underlying interactions between protons and neutrons. Since the exact point of the dripline can be narrowly defined – a matter of a few tens of keV, which is well beyond the uncertainty limits of any theory –the group took a probabilistic approach to the question, predicting the likelihood that any nucleus near the thresholds would exist or not. This, in turn, allowed for predictions for nuclear drip lines for each.

The group’s approach leveraged a specific two- and three-nucleon (NN + 3N) interaction which accurately describes ground-state energies across the range of nuclei, in tandem with their ab initio many-body framework, to predict proton and neutron separation energies with uncertainty estimates needed to define the dripline. A fuller description of the approach can be found here. 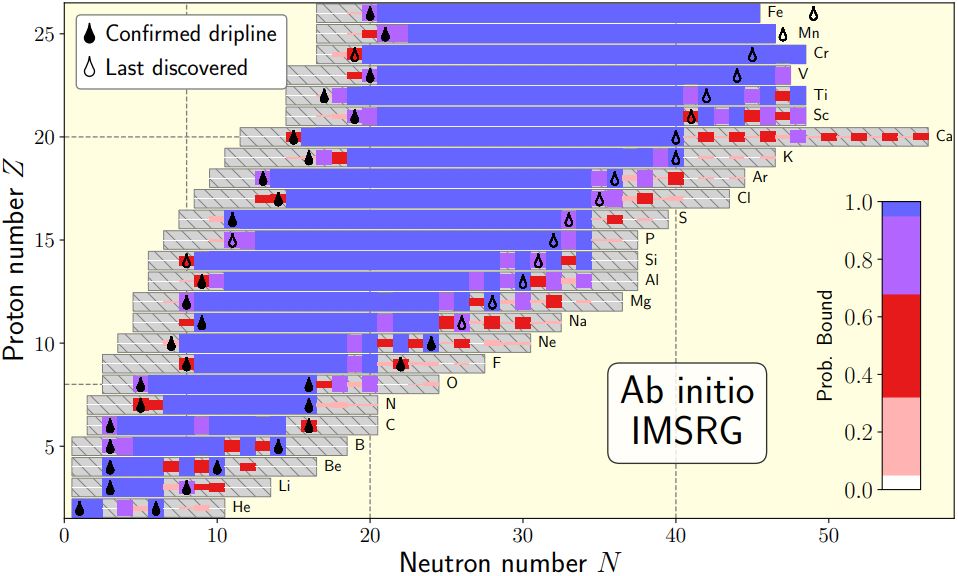 "This result really highlights the tremendous progress we’ve made over the past several years in the field of ab initio nuclear theory, as well as our efforts here at TRIUMF,” said Holt. “It’s been a revolution of sorts, and the truly exciting thing to think about is that it’s really only the beginning. We’re doing things now I didn’t think I’d see for another five years; only recently, a single nucleus or isotopic chain was a major achievement, and now we’re calculating nuclei globally. I can only imagine what the next few years hold, and only hope that our efforts here at TRIUMF can continue to play a role in advancing the boundaries of our knowledge of nuclei.”

The publication represents a significant addition to the current landscape of drip line predictions and the broader field of research on how nuclei behave on the brink of existence. Characterizing the strong force in these contexts could help us better understand how nuclei form within star cores, neutron star mergers, and supernovae. It will also help us design rare isotope beam facilities better to serve the needs of the nuclear physics research community.

Additionally, the predictions laid out in 'Ab initio' provide a critical path forward for the experimental nuclear physics community who are tackling the drip line problem using particle accelerators and rare isotope beams – including scientists at TRIUMF.

“Delineating the limits of existence of atomic nuclei and the development of a comprehensive, predictable theory of nuclei based on first principles are  major goals of modern nuclear physics, and these results are a major advance on these goals,” said Reiner Kruecken, Deputy Director, Research. “Historically, the interplay between theoretical predictions and experimental results has been a major driving force for scientific advancement, and these results are an important example of that progress at TRIUMF. Bravo to Jason and colleagues for their hard work and excellent results.”

You can read the paper here, and the Physics synopsis here.