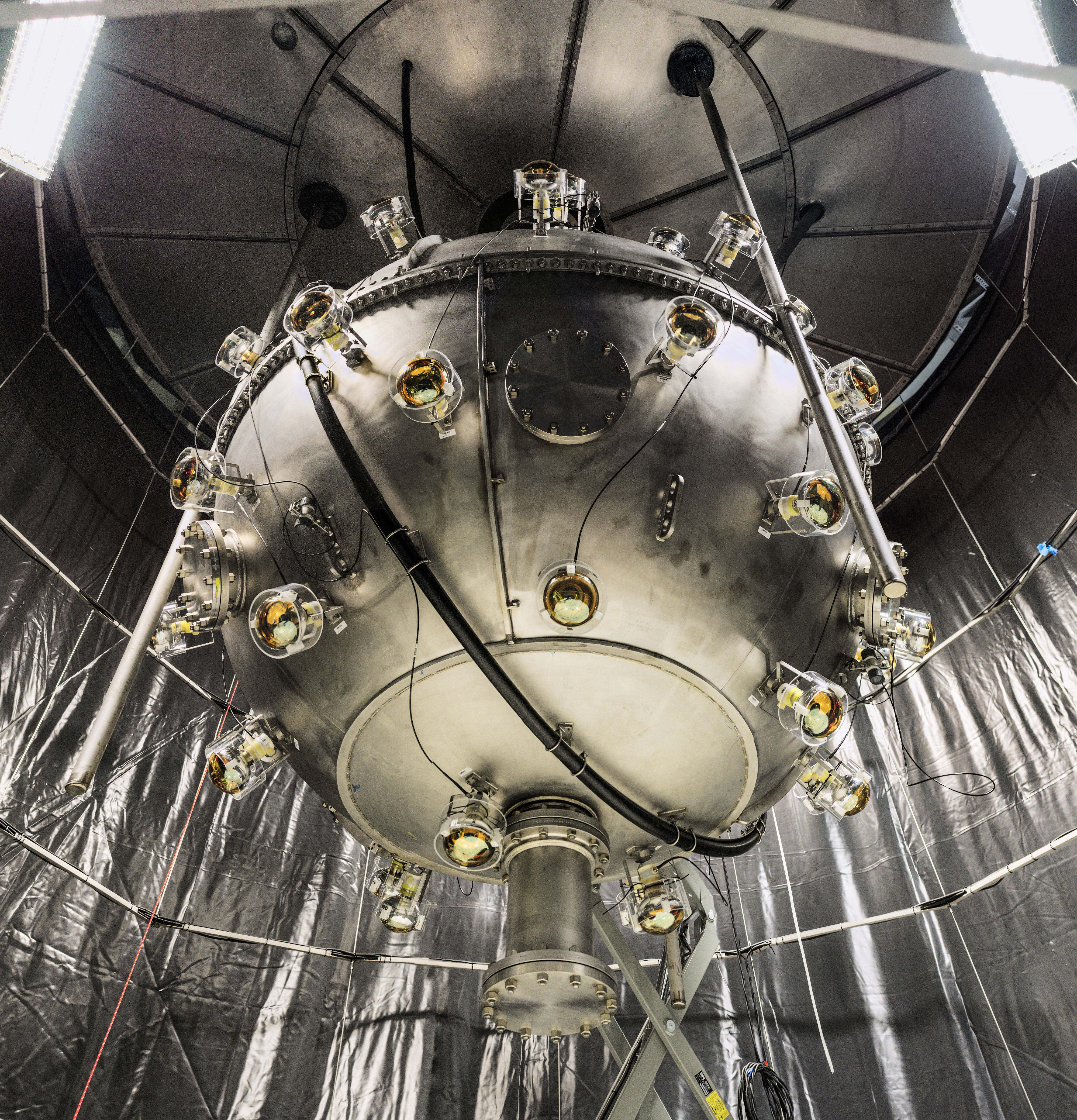 Argon in its natural form is a colourless, odorless, and non-flammable gas. It is also utterly unreactive – chemists and physicists have long wielded argon to formulate nonreactive and inert conditions. These qualities earned this noble gas its name, derived from the Greek word for ‘inactive.'

What use, then, is a 3600-kilogram sphere of liquid argon, buried under two kilometers of Ontario bedrock?

If you ask Dr. Pietro Giampa, a newly-joined TRIUMF scientist and recipient of the Otto Hausser Postdoctoral Fellowship, the simple answer (accompanied by a knowing smile) is: “Possibly changing our entire understanding of physics beyond the Standard Model, but also potentially the entire universe.” He delivers this response with the ease of repetition, a common trait among dark matter physicists. And while it may seem like a lofty claim, for Giampa and a dedicated team of particle physicists, astrophysicists, and astronomers at SNOLAB in Sudbury, ON, the proof may very well be in the depths of liquid argon.

The sphere of argon is a dark matter detector, and the central component of a state-of-the-art system called DEAP-3600: ‘Dark Matter Experiment using Argon Pulse-shape’ (with the argon weighing in at just over 3600 kilograms). Giampa and the DEAP-3600 team are working to characterize the fundamental properties of dark matter, a nebulous substance that makes up 23% of the mass of our universe and which we know next to nothing about.

“If the current predicted theoretical model for WIMPs hold true, the discovery for dark matter is within grasp for the DEAP-3600.” - Dr. Pietro Giampa

DEAP-3600 is in search of a host of particles widely considered the most viable candidates for dark matter: weakly interacting massive particles, or WIMPs. WIMPs behave similarly to the building-block particles of our universe like protons and neutrons, except that they don’t interact via any forces other than the electroweak and gravitational. This means that most WIMPs pass through our world without any interaction with atoms, subatomic particles, or nearly anything else.

DEAP-3600 works by listening for collisions between dark matter and the nuclei of argon atoms. The impacts will be faint, and the apparatus can only listen in on one bandwidth at a time. Theoretical models beyond the Standard Model point to a WIMP of mass 100 gigaelectronvolts (GeV) or greater, a range DEAP is uniquely capable of investigating.

Essentially, the detector provides a small sphere of space where collision events between WIMPs and the nuclei of argon atoms can be quietly recorded. Inactive argon, which undergoes no radioactive decay unless perturbed, is the perfect target for incoming dark matter particles; situating the argon sphere 2070 meters below Earth’s surface only heightens DEAP’s senses, eliminating the white noise of WIMP-like cosmic rays and muons. With a sufficiently large detector space and a sufficiently sensitive detection apparatus, there’s a chance that we’ll bear witness to the first WIMP ever observed as it glances off an argon atom. 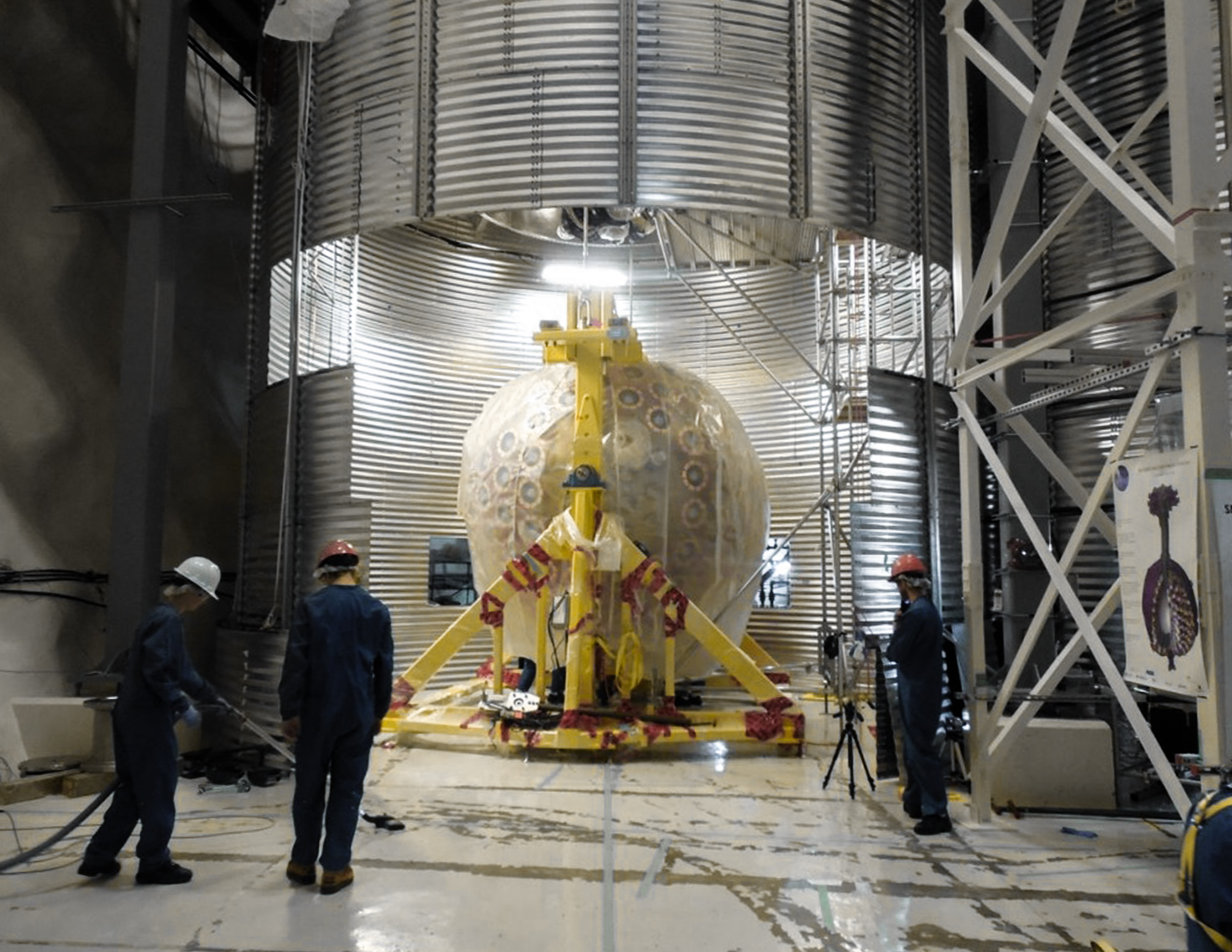 The DEAP team’s first results have surfaced: a new paper published by the group on August 1st, 2017 describes preliminary results from the experiment, and conclusions gleaned from just four and a half days of data-taking immediately following the completion of the detector system in August 2016. The paper details an extremely sensitive system, and a similarly sensitive, high-performance mathematical model for discriminating between the energy signals of WIMPs of different masses near the 100 GeV range.

The experiment didn’t observe any dark matter-argon collisions during its initial monitoring period, but this absence of signal is itself a telling sign. While the number of potential WIMP-argon collisions is as large as the diversity of WIMP masses, it is finite – by ruling out different masses of WIMPs, Giampa and the DEAP team are honing in on the mass of the WIMP that may interact with an argon nucleus.

Finding such a particle would be a boon for the field of particle physics. While WIMPS were chosen because they fit snugly into current theoretical models as potential dark matter particles, their discovery would have vast ramifications that extend beyond our current understanding of particle physics. Our entire concept of the universe would undergo a dramatic, tectonic shift.

With this lofty goal as their north star, the DEAP team (including TRIUMF scientists Pierre-Andre Amadruz, Ben Smith, Thomas Lidner, and TRIUMF team leader Fabrice Retiere) will continue their search, re-calibrating and tuning into different bandwidths of potential collisions. Further data-taking has been ongoing since August 2016, and it’s possible that more results will surface soon.

“We’re very excited to have proven the precision and sensitivity of the detector apparatus. While we’re but one of the many experiments around the world investigating the identity of dark matter, we can’t help but think that we are now one step closer to making this remarkable discovery.” -  Dr. Pietro Giampa

To keep tabs on the DEAP team or to learn more about the experiment, visit: http://deap3600.ca/