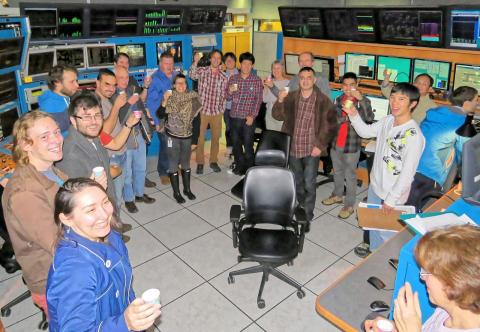 On Tuesday November 22, 2016, the Ultracold Neutron (UCN) Collaboration at TRIUMF achieved a major milestone when the first proton beam was directed successfully on the neutron-production target.  Measurements by the Radiation Protection Group (RPG) confirmed that ample numbers of neutrons were produced during the test. This success demonstrates that all the newly installed beamline elements up to the production target are functioning as intended, and that the collaboration is on track for ultracold neutron production next summer.

The big day began with first injection of a low current proton beam from the BL1A beamline into the purpose-built BL1U beamline dedicated to the UCN facility. Only 45 minutes later, the team successfully steered the beam onto the spallation production target.  The HARP2 beam profile monitor showed the expected beam profile (see Figure 1) just before the target. By the end of the day, the proton beam current was raised to 1 microamp, where a clear temperature rise of 3 degrees Celsius in the target indicated heating by the impinging proton beam. Radiation measurements by the RPG definitively confirmed neutron production in the target.

The UCN project is supported in part from a Canadian Foundation for Innovation (CFI) grant.   The University of Winnipeg (a TRIUMF Associate Member University) under principal investigator Prof. Jeff Martin lead the project on behalf of a consortium of institutes that includes the Research Centre for Nuclear Physics (RCNP) and the High Energy Accelerator Research Organization (KEK) in Osaka and Tsukuba, Japan, respectively.

Jens Dilling, Associate Lab Director – Physical Science Division, was enthusiastic: “Congratulations to the UCN team and all people involved, from the many groups and departments at TRIUMF. This is a major milestone for the Canada-Japan UCN collaboration and marks the beginning of a new era at TRIUMF, opening up a new research field with ultra cold neutrons and tremendous potential for scientific impact. Well done!”

Work on the UCN facility is continuing, with neutron irradiation runs with thermal and cold-neutron sensitive materials and target cool down to its nominal 10K operating temperature. During the 2017 TRIUMF winter, the UCN source cryostat will be installed. This cryostat cools down isotopically pure helium-4 to less than 1K and makes ultracold neutron production possible. First runs of the flagship neutron electric dipole moment experiment are scheduled as soon as a stable UCN production at TRIUMF has been established.