Back to school with TRIUMF and our members

TRIUMF is owned and operated by a consortium of 19 universities across Canada. Each university plays an integral part in the development and growth of TRIUMF. Each week we invite you to take a peak at some of the contributions our member universities have made to TRIUMF. 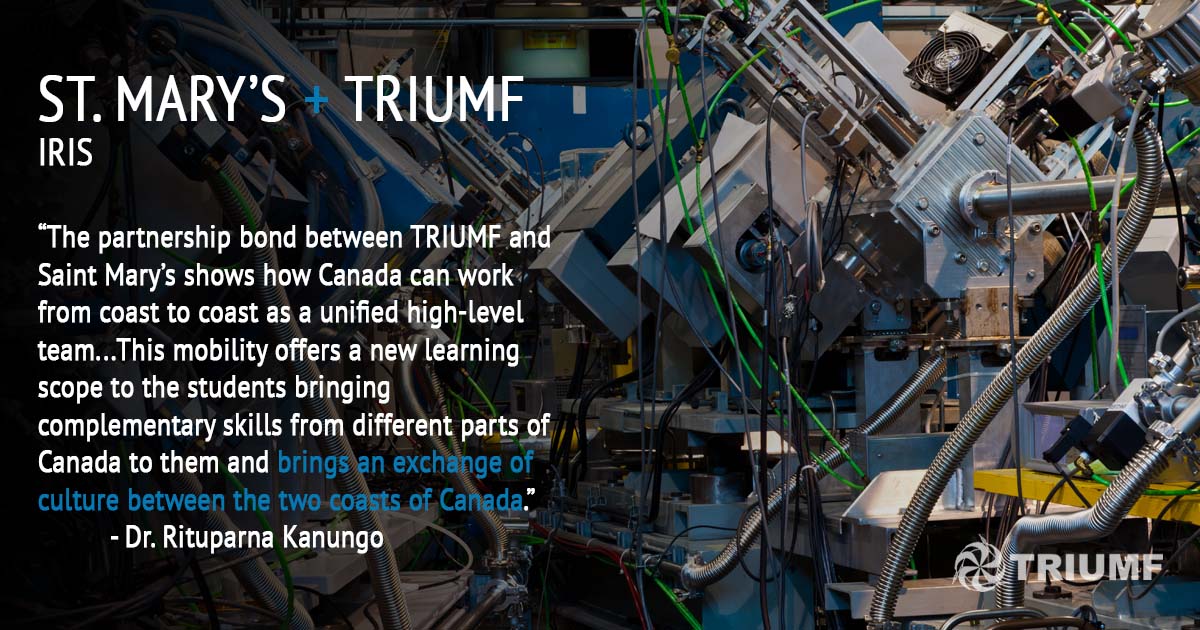 IRIS is the scientific eye to see inside the heart of rare isotopes through nuclear reactions. Nature creates these isotopes in exotic environments such as supernovae, neutrons stars or inside nuclear reactors on earth. IRIS has a world-unique feature of using thin ice sheet of frozen hydrogen (solid hydrogen) to scatter off nucleons from inside these rare isotopes. The intensity pattern of the scattered particles detected by the IRIS detectors tells us the unknown story of how nature arranges the building blocks, neutrons and protons to form these rare isotopes. It also leads us to the path to find out how nature is creating elements that makeup all the stuff that we see around us everyday.

Why is the collaboration between TRIUMF and St. Mary’s University essential to your project?

The IRIS project exemplifies how Saint Mary’s University and TRIUMF can mutually benefit for, achieving the highest level of science, and, facilitating to bring that within the reach of the university students. The collaboration allowed matching the high-level technical skills at TRIUMF with the forefront scientific project plan from the university to realize a world-class infrastructure that can push the boundary to acquire new knowledge. The high quality low-energy rare isotope beams at TRIUMF made it a natural home for IRIS to harvest discovery science.

What makes the relationship between TRIUMF and St. Mary’s University unique?

The partnership bond between TRIUMF and the Saint Mary’s university shows how Canada can work from coast to coast as a unified high-level team. TRIUMF becomes the west coast home of our east coast students for certain periods of time. This mobility offers a new learning scope to the students bringing complementary skills from different parts of Canada to them. It also brings an exchange of culture between the two coasts of Canada.   The success of IRIS has spurred another new project CANREB that will open more scope for the students.

The Saint Mary’s University and TRIUMF collaboration team welcomes all interested undergraduate and graduate students to contact us to become part of a world-leading team. 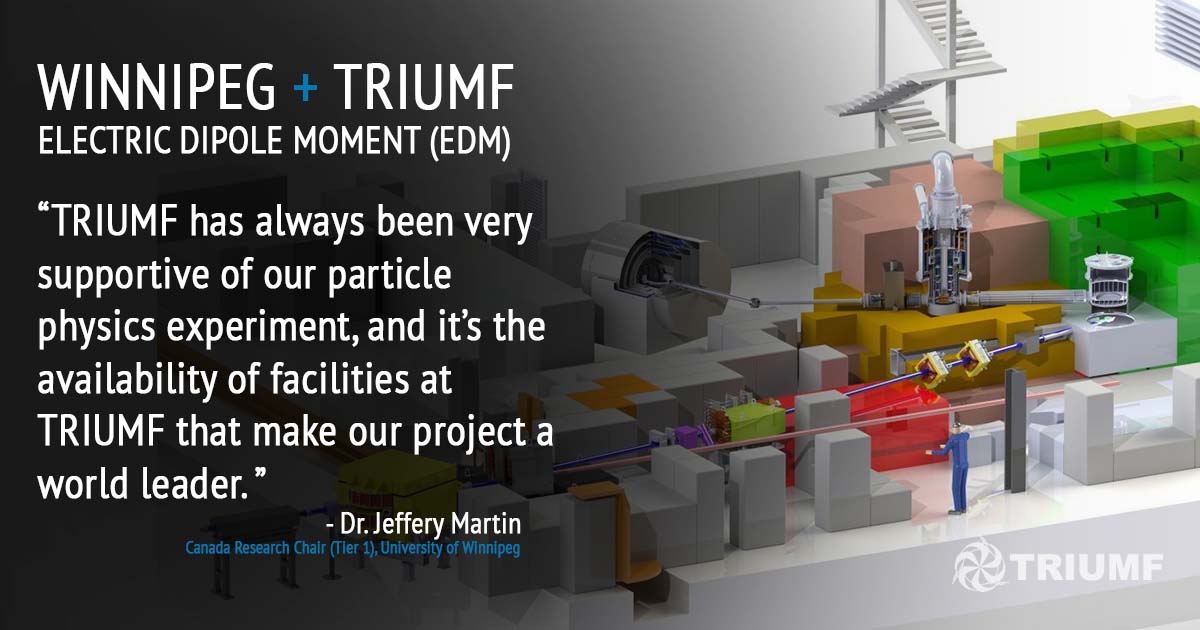 Can you describe your Electric Dipole Moment (EDM) and how it works?

We are making a high-intensity neutron source at TRIUMF that will be used to measure neutron properties. We seek to measure the neutron’s electric dipole moment (EDM) to higher precision than anyone has ever done before. If the EDM is not equal to zero, it signifies a violation of CP symmetry, which is the same symmetry that relates particles to antiparticles. In this way, the results could be related to an even bigger question: why is everything around us made of matter rather than antimatter?

Why is the collaboration between TRIUMF and the University of Winnipeg  essential to your project?

We take protons from TRIUMF’s cyclotron accelerator and smash them into a tungsten target. This makes a lot of neutrons, which we cool down and direct into our experiment. Without TRIUMF, its cyclotron, its resources, its people, and our collaborative drive to be the best in the world, this project would not be done in Canada.

What makes the relationship between TRIUMF and the University of Winnipeg?

TRIUMF has always been very supportive of our particle physics experiment, and it’s the availability of facilities at TRIUMF that make our project a world leader. [LL1] Four of our faculty members here at UWinnipeg all work together on our project at TRIUMF. One of them, Russ Mammei, is jointly appointed between TRIUMF and the University of Winnipeg. I myself was once a summer student at TRIUMF, and I still love conducting research there. It is a great environment for physics research. 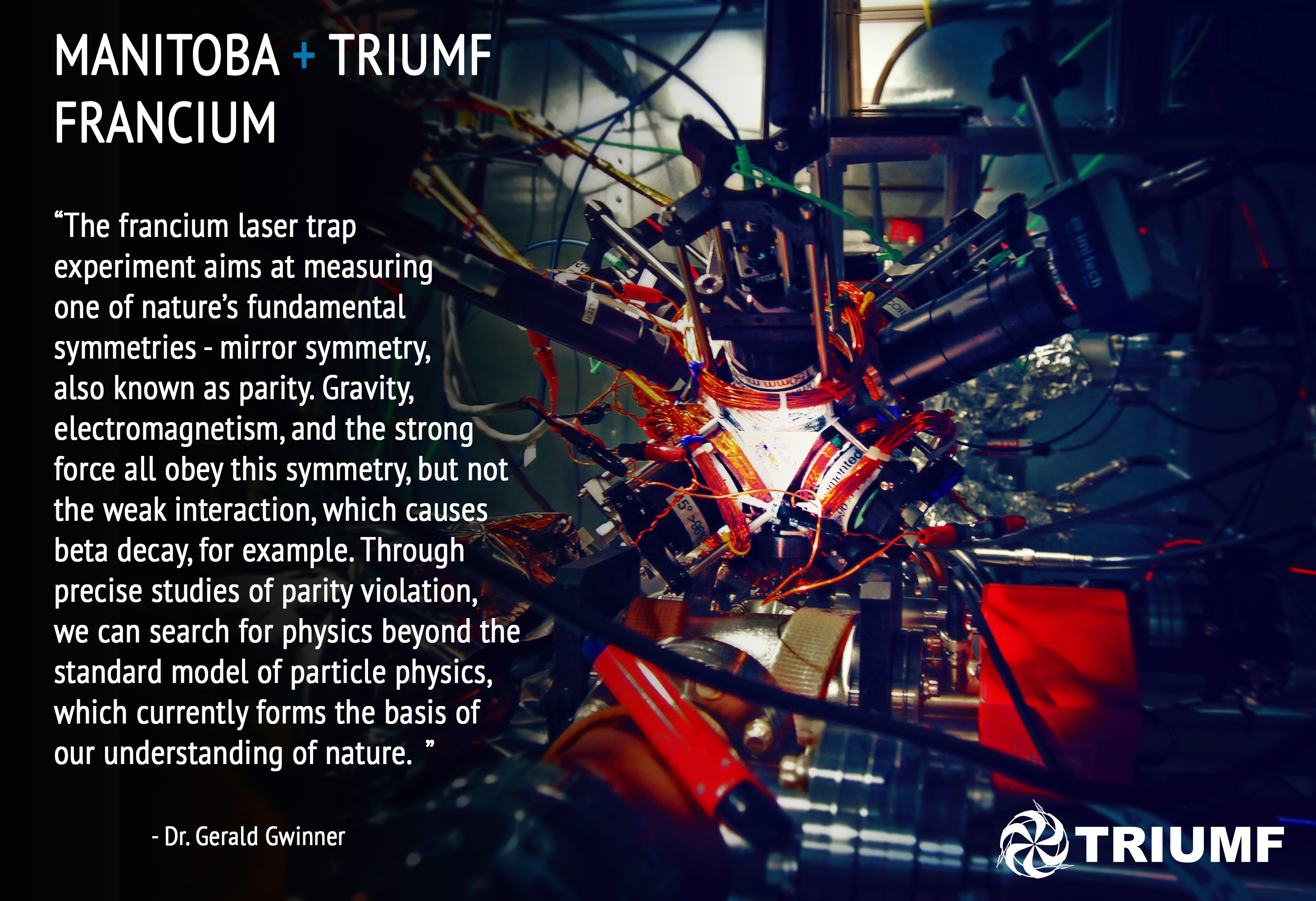 Can you describe your project and how it works?

The francium laser trap experiment aims at measuring one of nature’s fundamental symmetries - mirror symmetry, also known as parity. Gravity, electromagnetism, and the strong force all obey this symmetry, but not the weak interaction, which causes for example beta decay. Through precise studies of parity violation, we can search for physics beyond the standard model of particle physics, which currently forms the basis of our understanding of nature.

Why is the collaboration between TRIUMF and your institution essential to your project?

As parity-violating effects get largest in heavy atoms, and since we also need a simple atomic system with a single outer electron, the element francium, nearly as heavy as uranium, is very attractive. But francium has no stable isotopes! Only about 20 grams of it exist inside all of earth at any given moment from natural decay of uranium. Using TRIUMF’s radioactive beam facility ISAC, we can artificially create francium atoms which we capture, trap and cool in a magneto-optical trap, where 6 intense laser beams confine the atoms in the middle of a ultra-high vacuum chamber, at temperatures about a million times colder than Manitoba on the coldest day of the year.

What makes the relationship between TRIUMF and your institution unique?

The University of Manitoba is a full member of TRIUMF and hence has access to world-class capabilities that otherwise are beyond the reach of any single university. We can collaborate with leading scientists at TRIUMF, who provide critical expertise on site. At the university, on the other hand, we can recruit promising students and provide them with a unique research experience at TRIUMF. It’s win-win. 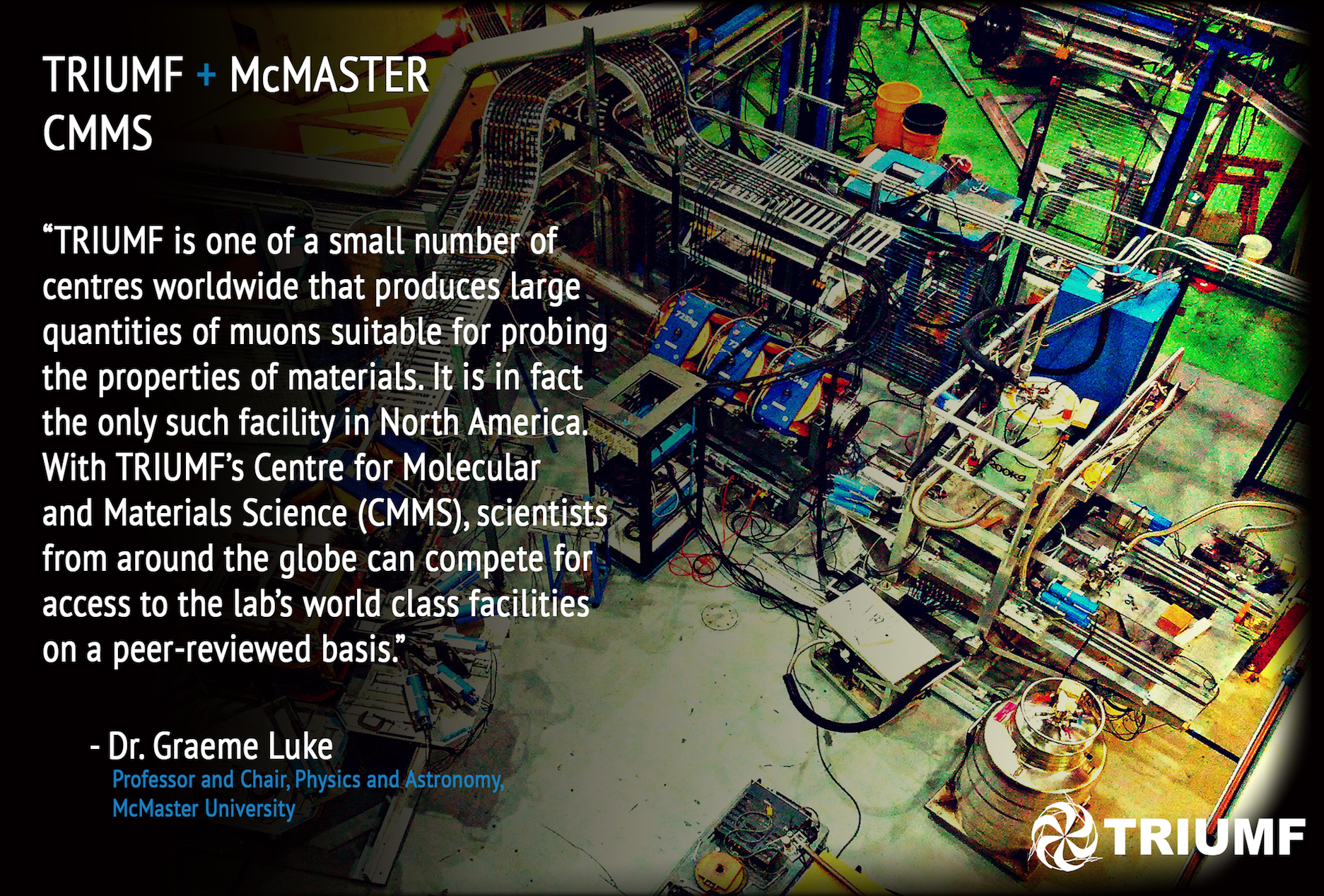 Can you describe your project and how it works?

I am an experimental physicist working in the area of Quantum Materials.  Quantum Materials are those which exhibit novel behavior at low temperatures which are derived from the collective quantum mechanical nature of their constituent electrons.  Examples include exotic superconductors and a wide variety of weird magnetic systems such as spin liquids and spin ice.  At TRIUMF, I use the exquisite sensitivity of positive muons to their magnetic environment to probe the internal magnetic fields of quantum materials.

Why is the collaboration between TRIUMF and your institution essential to your project?

TRIUMF is one of a small number of facilities worldwide that produces large quantities of muons suitable for probing the properties of materials.  It is in fact the only such facility in North America.  Others are situated in Japan and England, with new facilities being contemplated for USA, Korea and China. TRIUMF’s Centre for Molecular and Materials Science (TCMMS) operates a user facility where scientists from around the world can compete for access to TRIUMF’s world class facilities on a peer-reviewed basis.

McMaster University is presently an Associate member of TRIUMF.  Because of the great value TRIUMF provides to members of our university (not just myself!) we are proposing to become a full member of the TRIUMF consortium.  We hope and expect this will strengthen the lab and McMaster’s connection to it.

What makes the relationship between TRIUMF and your institution unique?

McMaster University has faculty members actively involved a wide variety of research initiatives at TRIUMF which span TRIUMF’s research areas.  I use the facilities of the TCMMS for muon spin rotation/relaxation measurements while Alan Chen (also from Physics & Astronomy) uses the beams of ISAC and its DRAGON spectrometer to look at important processes in nuclear astrophysics.  Our Centre for Probe Development and Commercialization, headed by John Valliant is collaborating with TRIUMF to develop new radioactive probes to help address Canada’s health care needs.  The crucial contributions of this collaboration were recognized with the awarding of the 2015 NSERC Brockhouse Canada Prize for Interdisciplinary Research in Science and Engineering.