At TRIUMF’s annual Science Week in July 2022, the laboratory’s Communications team joined forces with event organizers and students to challenge the traditional and reimagine one of the most persistent archetypes in science education: the science poster. 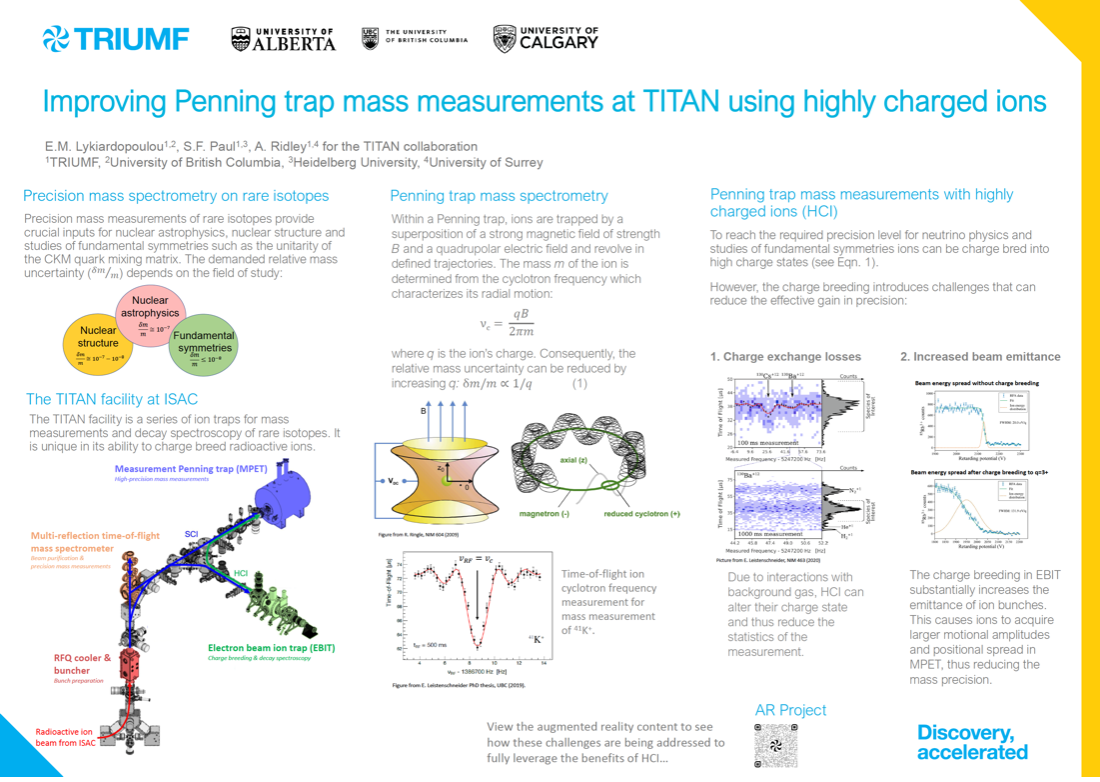 Scientific posters have become a rite of passage for students, from primary school science fairs to PhD-level conferences, in the same way a presentation or talk is – the only way to share unpublished data or discuss new ideas in a research or academic setting – nearly everyone in STEM and beyond has been required to create one. However, visual designers have long viewed this medium for science communication as an opportunity to engage audiences in new pathways for learning, and to help students develop job skills relevant in tomorrow’s knowledge economy.

We imagined a cloud-connected Virtual Reality (VR) poster session that allowed anyone anywhere to participate as a presenter or an observer - the requirements were a suitably powerful workstation, VR headset, and the ability to connect to an established presentation server using a collaborative VR platform. While passive participation may have been arranged with large displays in a single location, this dream was global, allowing students anywhere the opportunity to participate. Similar scenarios have become de rigueur for automotive and industrial design in the remote work era. Dan Rowbotham and Nemanja Jovicic in the TRIUMF Design Office provided invaluable due diligence and support in evaluating head-mounted VR displays for this purpose, as well as demonstrating application for the future of their engineering design work. 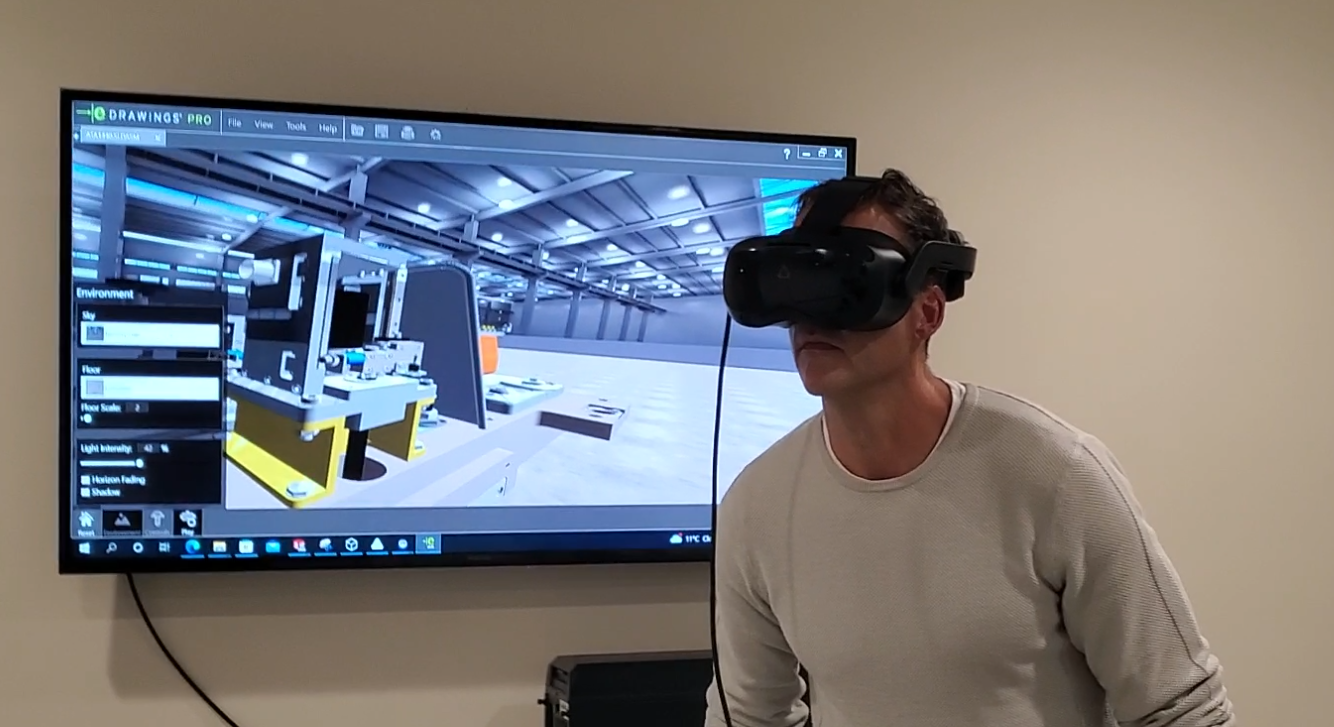 To scale the idea, we began to tap TRIUMF’s partner network, identifying local hubs and nodes capable of supporting student presenters with sufficient computing power and VR support. This sharp technical and administrative learning curve also presented a considerable barrier to entry for student presenters who’d need a greater knowledge of modeling and rendering tools and techniques to stand up their presentations. The scale and constraints of the virtual event quickly became counterintuitive to the original Science Week goals to Connect, Collaborate, and Celebrate. To support the interest for social connection, as is the tradition for these sessions, it was clear that we had to reassess. Another challenge that event design had to overcome was the production and presentation method had to strike a balance between advancing the idea and maintaining an accessible event. It had to account for all skill levels, and, given the student’s academic and work schedules, a relatively manageable amount of effort.

The team decided to plot one small step first – an incremental innovation– and pivoted focus towards an Augmented Reality (AR) student poster session instead. AR acts as a supplement to the existing poster, expanding on the printed paradigm with no requirement for attendees to engage in the technology.  This lower barrier to entry helped ensure the 20+ undergraduate and graduate students and postdoctoral fellows remained engaged and motivated to learn new methods for communicating their research results and theses.

To establish which tools, technology, and approaches would be used to guide the students, Abney developed an AR prototype to highlight TRIUMF's contributions to and role in the international ATLAS collaboration blending 2D infographics with existing 3D models made available by CERN. This proof of concept presented how both mediums supported various AR interactions.  Students could then decide how to leverage existing design assets to develop new ways of communicating their science. 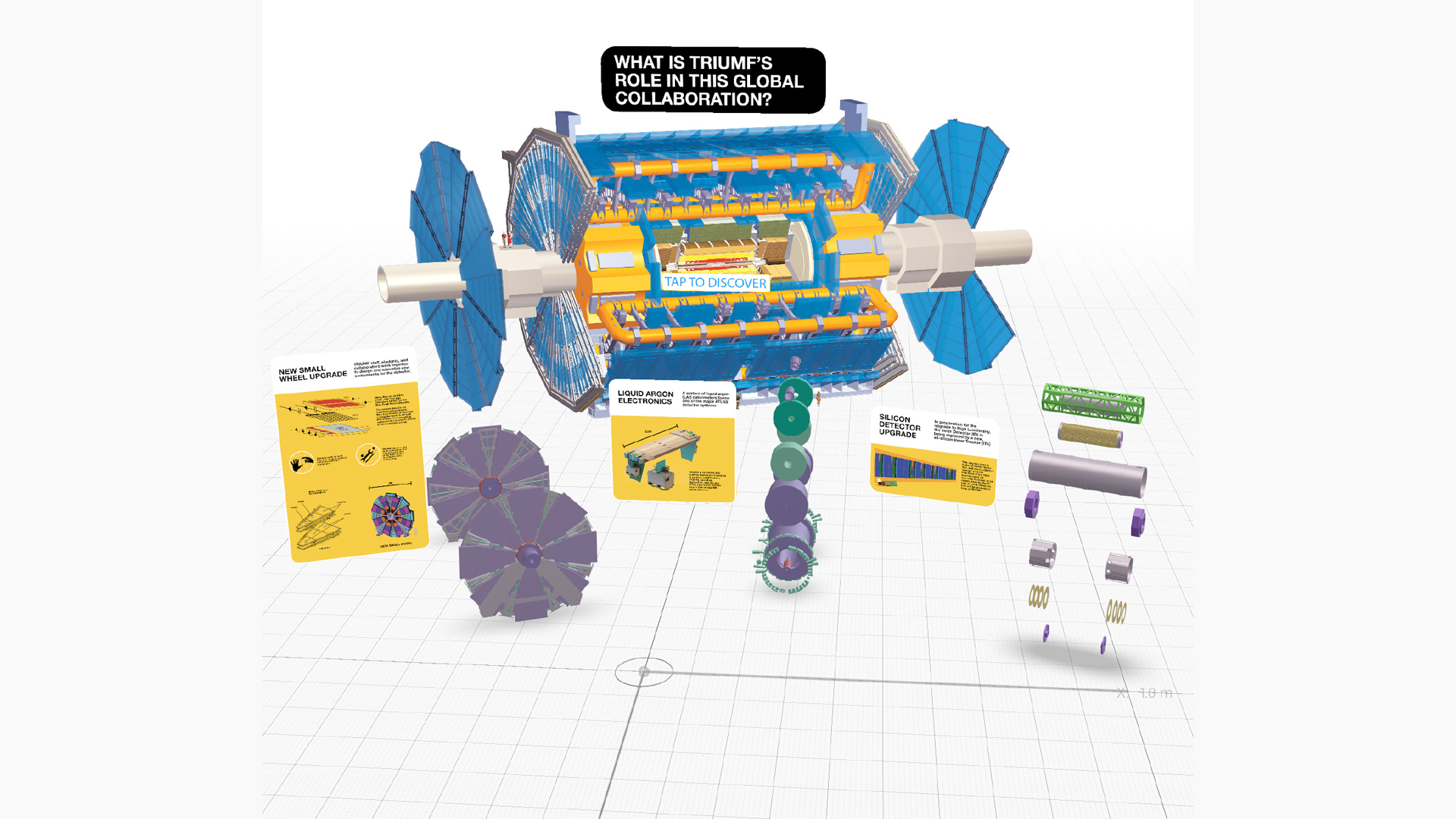 With a robust example and documented workflow, the first cohort of pioneering students embarked on a 5-week sprint to ideate, implement, and augment their scientific concept for the first-time using AR technology.

The work began by conceptualizing how the poster content could be explored in 3D space and how any available models or schematics could be tailored in interesting ways allowing students to develop new skills in 3D modeling and augmented scene composition. The poster and AR projects were loosely coupled since they required completion in sequence. Print deadlines came first, while the AR demos were hosted in the cloud, allowing students to test and iterate right up to the moment of the event. Each poster featured a pre-established QR code linking the two experiences. 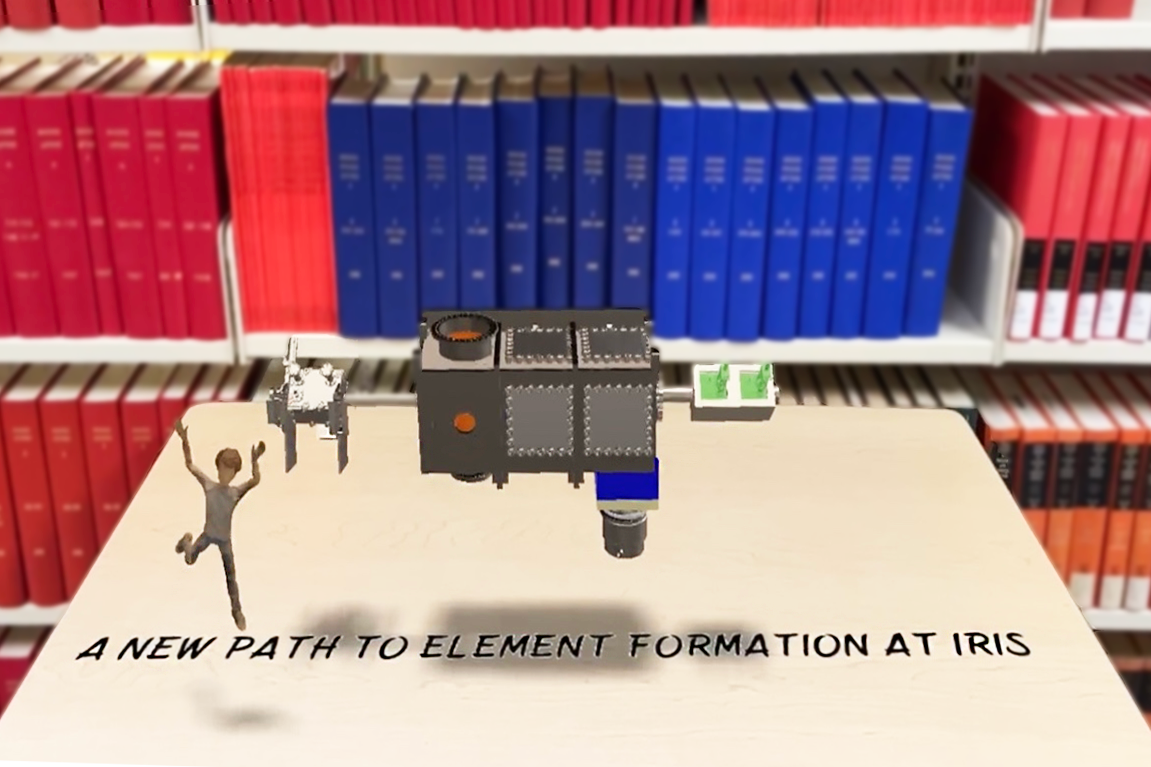 The event design allowed for the students to use a traditional poster presentation while showcasing their AR demos through a mobile tablet. The integration of QR codes allowed anyone with a compatible smart phone to freely explore the AR demos without waiting in line or struggling to listen in. This setup allowed for remote participants to easily attend as well; with the physical poster printed and AR demos in the cloud, these presenters appeared on a second screen connected by video to discuss their work with attendees.

"Participating in the AR poster session was a great learning experience,” said Sakib Rahman, postdoctoral fellow, University of Manitoba. “I enjoyed using new communication tools, and as a remote participant, I had to think a little harder to make the AR experience more immersive, interactive, and self-guided from the audience perspective. The key takeaway for me was to focus on the ease of access for the audience, regardless of the medium."

The addition of a VR showcase delivered by mechanical designer Nemanja Jovicic, our now established expert, provided an additional benefit for spotlighting these professionals for their contributions to world-class research in head-mounted displays interacting with one of-a-kind components developed for the lab’s Advanced Rare Isotope Laboratory (ARIEL). 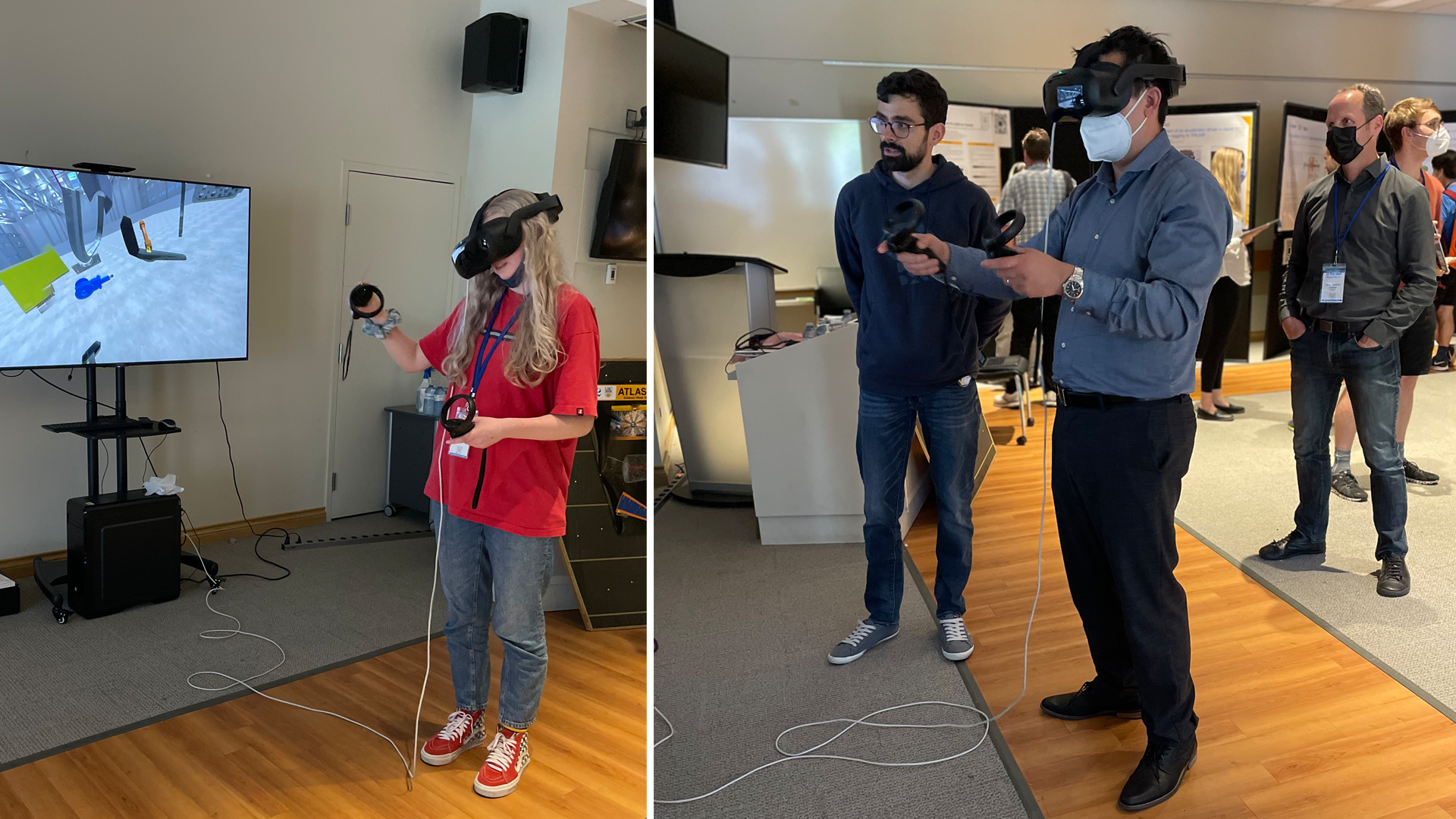 Both AR and VR allow researchers, engineers, students, and even career educators to present results, visualize data, and discuss unique ideas in ways not possible before. The experience becomes more inclusive, as all senses are deployed at the same time. For visual learners, starting in primary school, these mediums might make more complicated concepts in math, biology, and technology easier to approach and understand. 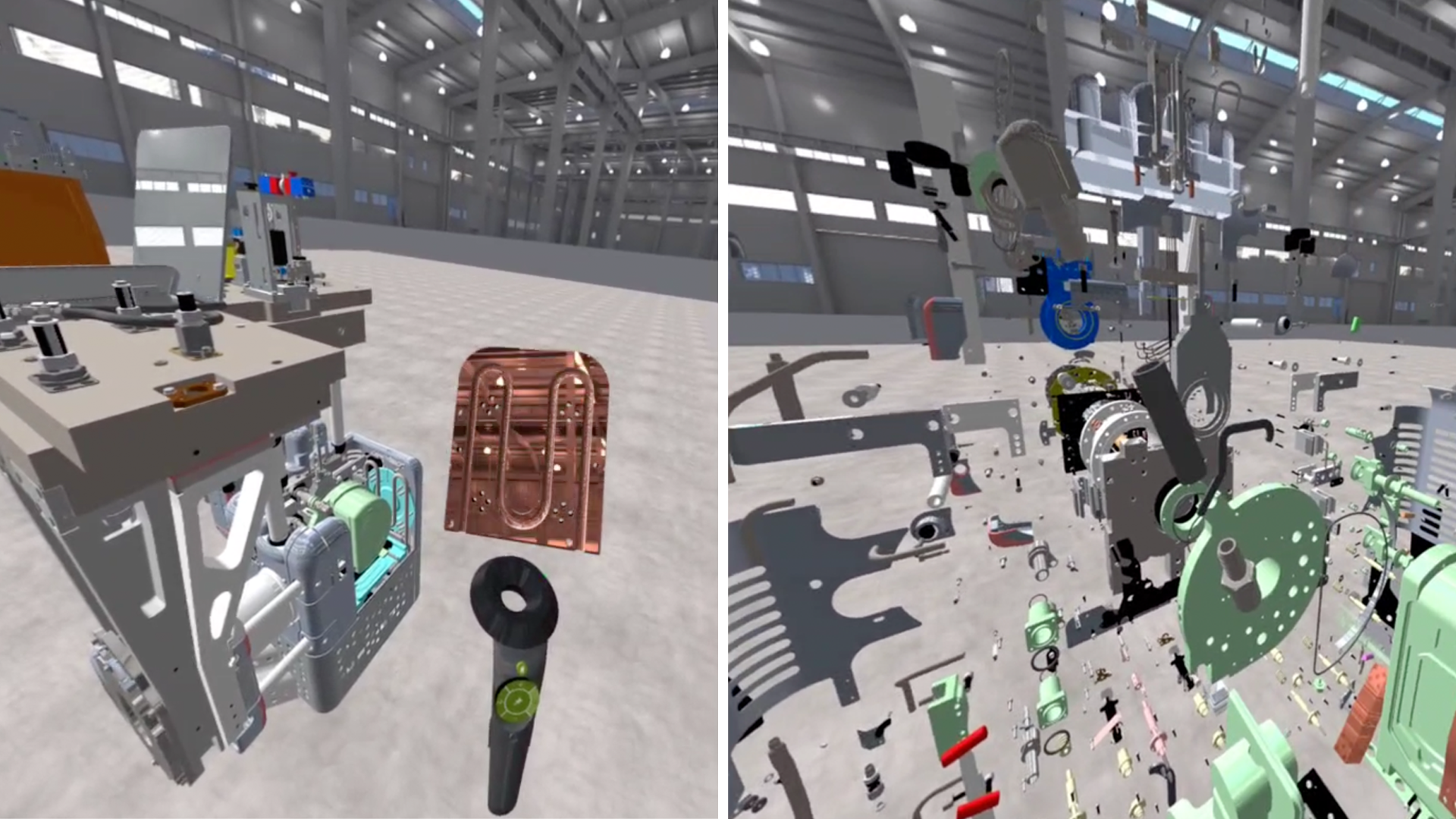 One key example – inspired by the Science Week AR poster session – is the development of a VR application by a local Grade 7 student for a science project at University Hill Elementary School located near to TRIUMF. The student used the same tools employed for Science Week to imagine what a Mars base camp might look like. All modeling was completed in TinkerCAD, software free for schools to use. The 3D models were imported into Sketchfab for Oculus VR to shape the 360-degree environment by creating walk paths and crafting views from space - a truly mind-blowing experience for early STEM+Art (STEAM) enthusiasts. This fundamentally changed how the students engaged their senses in learning – through sight, hearing, and touch – and highlighted new concepts not easily translated through paper or on screens. Being able to share their interpretation of life on Mars while inside a classroom setting is truly becoming the next generation of immersive learning.

The student teams and their work may be viewed on the lab’s YouTube AR showcase playlist, where links to each AR demo and poster file can also be found in the descriptions.