99mTc is typically obtained from the in situ decay of 99Mo on a 99Mo/99mTc generator, which contains high specific activity 99Mo embedded onto a small aluminum column. The parent isotope, 99Mo is currently produced in nuclear reactors by the fission and recovery of 99Mo from 235U.

Our solution consists of direct on-target production of Tc-99m using medical cyclotrons. The molybdenum target undergoes transmutation via the 100Mo(p,2n)99mTc reaction. With some modifications of existing cyclotron infrastructure, this approach could be used to implement a highly decentralized medical isotope production model.

Our goal is to enable access to Tc-99m without requiring substantial changes within the healthcare community. 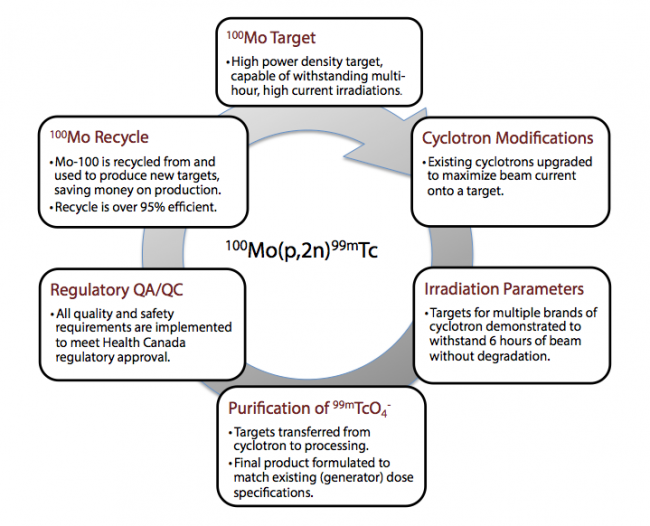 Many hospitals in major urban centres operate cyclotrons. Cyclotrons work by accelerating hydrogen ions to a prerequisite energy and then directing them onto targets; in this case, the targets are made of enriched molybdenum-100 (Mo-100).  As the hydrogen ions are extracted from the cyclotron, the electrons are stripped off so that the beam exiting the machine is simply a stream of protons.

There are currently over 950 small medical cyclotrons manufactured by several companies (ACSI, GE, IBA, Siemens, Sumitomo, Best, etc.) installed around the world. Approximately 550 of these machines operate above 16 MeV and are capable of producing appreciable quantities of Tc-99m. Existing cyclotrons would need to be upgraded to maximize beam current onto a single target.

The protons collide with the molybdenum nuclei and a certain fraction of them cause the Mo-100 to transmute into Tc-99m (called the 100Mo(p,2n)99mTc reaction).  Some Mo-99 and other impurities can also be produced, especially if the energy of the exiting protons is not carefully controlled. The presence of excess Mo-99 should be avoided.

One of our key challenges was to develop a high power density target, capable of withstanding multi‐ hour, high current irradiations at the kW power level.

Tc-99m has a halflife of approximately 6 hours. Once the cyclotron is stopped, the Mo-100 target is removed from the machine and given to chemists who then work to quickly extract the technetium from the target material.  To start the extraction process, the target is dissolved into a simple liquid solution.

The solution is then passed through an ion-exchange column to separate the Tc-99m from the bulk Mo-100 target material. The Mo-100 is put aside where it is eventually recycled into new targets, while the Tc-99m is sterilized and readied for the patient. Conveninetly, the chemical form of Tc-99m isolated using this method is identical to that obtained from the original reactor-based process. We ensure the product is of highest standard by testing for sterility, purity, and identity.

Alternative, non-reactor technologies for producing molybdenum-99 (Mo-99) and its medically-useful daughter radionuclide technetium-99m (Tc-99m) have been known for over forty years1,2,3.  Specifically, the 100Mo(p,2n)99mTc transformation was first reported at a small scale in 1971, but with the availability of Mo-99 from a handful of nuclear reactors around the globe, no reason existed to exploit other approaches for commercial-scale production and distribution of Tc-99m. The technonlogy described above avoids the need for highly enriched uranium, since the production of Mo-99 in a reactor occurs via the 235U(n,F)99Mo process. U-235 is fissile and the key ingredient to many nuclear reactor and weapon technologies.

Some content from Direct Production of Tc-99m via Mo-100(p,2n) on Small Medical Cyclotrons. By Schaffer et. al.

Technical description of the CycloMed99 approach