The Theory Group studies a broad range of topics in subatomic physics, including nuclear physics, hadronic physics, and elementary particles. The Theory Group also provides guidance and support to the TRIUMF experimental program and acts as a theoretical center for the broader Canadian subatomic theory community.

All the stuff around us is made up of a set basic building blocks called atoms. This is one of the most important and powerful ideas in all of science. The reason it is so useful is that there are only a few hundred different types of atoms. While this might still sound like a lot, these few hundred varieties of atoms combine to form nearly everything, from water to cats to mountains to trains to stars to the air we're breathing. If your goal is to do science - to understand how things work - this is an enormous simplification.

Atoms themselves are made up of even smaller components. The field of subatomic physics is concerned with figuring out what these components are and how they interact with one another. Each atom consists of cloud of negatively charged electrons surrounding a very small positively charged nucleus. As far as we know, electrons are not made up of anything more elementary. Nuclei, on the other hand, consist of even smaller components. 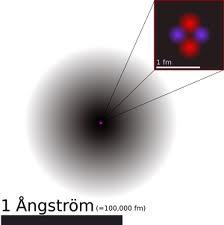 Nuclear Physics investigates the structure of nuclei and their interactions. Every nucleus consists of positively charged protons and neutral neutrons bound together by the strong force. Depending on the number of protons and neutrons, a nucleus can be stable or it can decay into lighter nuclei. Two nuclei can also combine to form a heavier nucleus when they collide. These processes are very important for astrophysics, and it is the transformation of one type of nucleus to another that provides the energy source for the sun and other stars. More details about the activities of the Theory Group in nuclear physics can be found here.

The protons and neutrons that make up nuclei consist of even smaller objects called quarks and gluons, also bound together through the strong force. (You're probably beginning to see a pattern here.) Collectively, objects made up of quarks and gluons are called hadrons, which includes protons and neutrons as well as many other exotic particles such as mesons. The goal of Hadronic Physics is to understand and predict the properties of hadrons based on the underlying structure of the strong force. Details about Theory Group research in hadronic physics can be found here.

Particle Physics attempts to discover the fundamental building blocks of our universe. These attempts connect with the mass and structure of the Higgs boson, the unknown nature of dark matter, and the mystery of the excess of matter over antimatter. More details can be found here.

dmorri
jgagne
sshepherd
3 members
Created: Feb 11 2009
This is a closed group. Only a group administrator can add you.