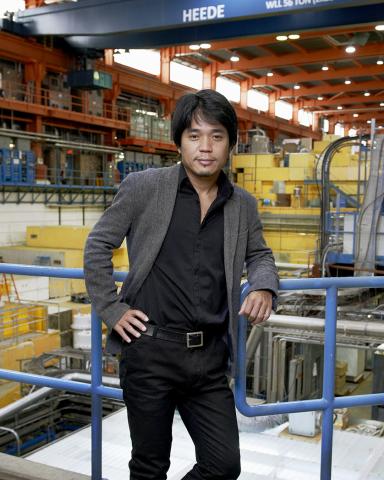 Makoto Fujiwara, TRIUMF Research Scientist and Department Head for Particle Physics, has been elected a Fellow of the American Physics Society (APS). According to the APS citation, Fujiwara was elected "For seminal contributions to antihydrogen studies, and for leadership in developing the ideas and techniques that enabled observations of the production and trapping of antihydrogen."  He was nominated by the Topical Group Precision Measurement & Fundamental Constants of the APS.

Fujiwara leads the ALPHA-Canada group working within the ALPHA Collaboration at CERN. The group has done groundbreaking work on antihydrogen physics, and has received many accolades, most recently the NSERC John C. Polyani Award in 2013. Presently they are running their next-generation antihydrogen trap, ALPHA-2, at CERN, with which they hope to do the first laser spectroscopy of antihydrogen.  As well, the group is constructing a new trap (ALPHA-g) to study the gravitational interaction on the antihydrogen atom.

The APS Fellowship Program was created to recognize members who may have made advances in physics through original research and publication, or made significant innovative contributions in the application of physics to science and technology. They may also have made significant contributions to the teaching of physics or service and participation in the activities of the Society.

Each year, no more than one half of one percent of the Society membership is recognized by their peers for election to the status of Fellow in the American Physical Society, so this is indeed a great honour for Fujiwara and a testament to the fine work of the ALPHA-Canada team at TRIUMF and across Canada.