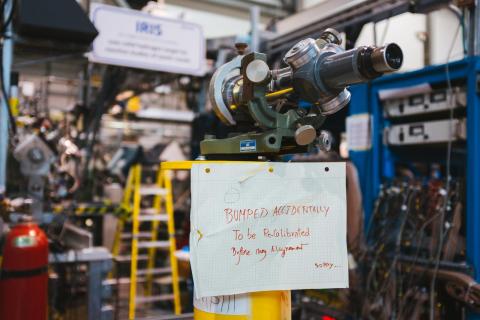 Behind the scenes at the world’s laboratories

Visit this page for TRIUMF photowalk registration details and information.

Back by popular demand, eight of the world’s leading particle physics laboratories are joining together to host the Global Physics Photowalk on September 25-26, 2015.

Over 200 participants will have the rare opportunity to photograph state-of-the-art accelerators and detectors in all their beauty and complexity and to share them with the world through a global competition. This exclusive event grants photographers special behind-the-scenes access to laboratories in Asia, Australia, Europe and North America, with tours tailored to the creative eye.

Professional and amateur photographers alike are invited to register at one of these participating laboratories. Click on links to see local event pages.

For the first time, the Stawell Underground Physics Laboratory – the only lab of its kind in Australia - is opening its doors to the underground facility in its early stages of development for photographers. The lab will house the first ever direct-detection dark matter experiment in the Southern Hemisphere.

At Japan's KEK laboratory, highlights include the upgraded SuperKEKB accelerator and Belle II detector that will start running experiments early next year.

In Europe, participants will have a behind-the-scenes tour at CERN, including the brand new Linac 4, the future source of proton beams for the Large Hadron Collider. In Germany, participants will experience DESY’s campus and research facilities, including the 300-metre PETRA III experimental hall with its impressive architecture and numerous experimental huts. In Italy, participants will visit the National Laboratory of Frascati, birthplace of the first accelerator prototype, designed and built by Bruno Touschek, and currently home to the powerful accelerator DAΦNE.

In North America, sites include two of the U.S. Department of Energy's (DOE) national labs with an underground cavern that houses three neutrino detectors at Fermilab and an X-ray free-electron laser that makes movies of atoms and molecules at SLAC. In Canada, participants will visit the world’s largest cyclotron and the isotope research facilities for physics and medicine at TRIUMF.

After the photowalk event, the Interactions Collaboration is inviting participants to submit their best photos to the respective laboratories for local competitions. The winning photos from each laboratory's local competition will be announced in November and then be released into a global competition.

Three photos per laboratory will compete globally in two categories: a “People’s Choice” conducted via an online popular-vote competition, and a “Jury Competition” facilitated through a panel of international judges.

Global winners will have the opportunity to be featured in symmetry magazine, in the CERN Courier, and as part of a travelling exhibit across laboratories in Australia, Asia, Europe and North America. Winners of the global competition will be announced in December.

The Global Physics Photowalk is organized by the InterAction collaboration, whose members represent particle physics laboratories in Australia, Asia, Europe and North America.

Visit www.flickr.com/photos/interactions_photos for photos from previous events. On social media, follow #PhysPics15 for the latest updates.

–Taken from an InterActions Press Release

Photo above by Justin Lee, winning photo of the TRIUMF Photowalk 2014.