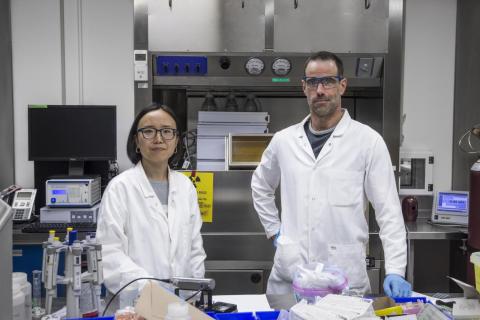 A team of researchers led by SFU scientists Matthew Nodwell, Robert Britton and TRIUMF scientists Hua Yang and Paul Schaffer has demonstrated a new method for producing radiotracers for Positron Emission Tomography (PET) cancer scans, a type of medical imaging that produces images of organs and tissues inside the body. Published on March 1st, 2017 in the Journal of the American Chemical Society (JACS), the results of the paper present an alternate methodology for incorporating the radiotracing isotope Fluorine-18 (­18F) into amino acid compounds used in PET cancer scans. This alternate route represents an exciting step towards streamlining the production of radiotracers and opens the door to diverse PET capabilities.

A PET scan is only as good as its radiotracer

PET scans are invaluable diagnostic tools for tracking the progression of cancer and other diseases in the body. PET scans combine one of a variety of radioisotope-tagged biomolecules (‘radiotracers’), each formulated to visualize a different illness, and a gamma-ray camera to detect and locate emissions from the decaying radiotracer atoms. By tracking where the biomolecules travel and accrete within the body, PET scans can offer valuable insight into the location and degree of disease progression in real time.

PET radioisotopes are created by ‘tagging’ a particular biomolecule with radioactive isotopes- for instance, inserting an 18F atom in the place of a hydrogen atom in an amino acid molecule. 18F is  the mostly commonly used PET isotope that can be tagged to biomolecules, which in turn are chosen for their relationship to ailments like cancers, Parkinson's, Alzheimer's, and even broken bones.

However, adjoining 18F to a biomolecule is no simple task. Researchers must first identify a viable molecule for insertion (one involved in the abnormal cellular metabolism characteristic of cancer, for example), then determine a location where an 18F atom can be placed without disrupting the biomolecule’s normal function. Radiochemists must then devise a precursor for that molecule and a targeted chemical reaction to insert the 18F atom. Creating new radio-tagged biomolecules is a lengthy and time-consuming exercise in synthetic chemistry, and much radiochemical research is devoted to streamlining and improving radiotracer development. 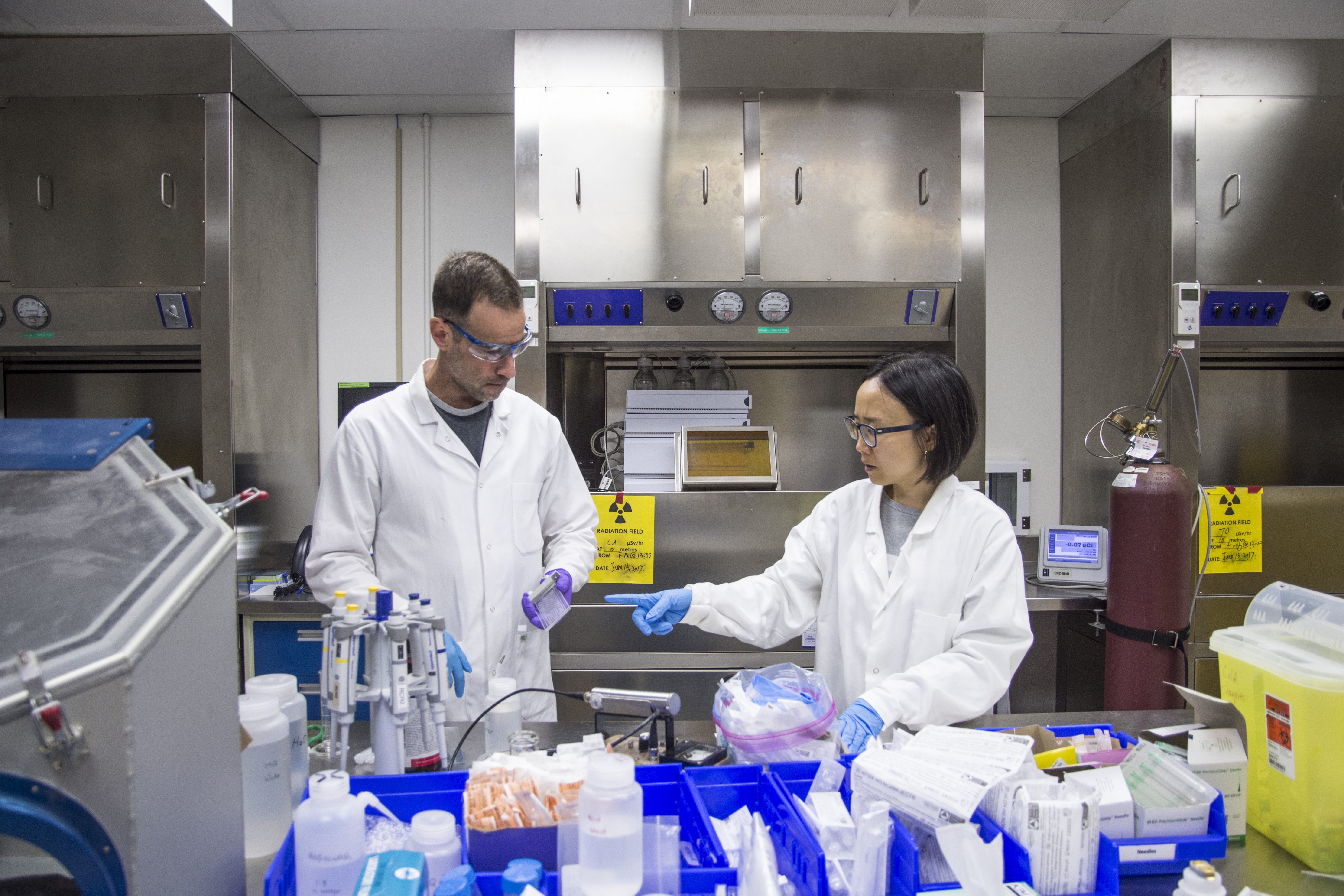 The rigors of radiotracer production are, in part, why Matthew Nodwell and Hua Yang were so excited to share their results. The research group they lead, a collaboration between TRIUMF, Simon Fraser University (SFU) and the BC Cancer Agency (BCCA), has presented a new and improved way to create radiotracers via direct fluorination without the need for harsh chemical conditions or complex precursors.

The new technique relies on the role of the amino acid leucine in cancer progression. As the building blocks of protein, amino acids often exist in high concentrations in tumours and malignancies and thus represents promising PET imaging molecules. However, traditional synthetic strategies for incorporating radionuclides into amino acid molecules often require chemically harsh conditions (strong bases, high temperatures, etc.) that risk decomposing the starting materials. Even getting the amino acid molecule to the point where it can be fluorinated can take multiple time-consuming steps involving a variety of precursor molecules. The technique developed by the group circumvents these obstacles and allows easy access to a suite of molecules that show potential for development as oncological imaging agents.

“I think we set a new record!” said Nodwell of the new fluorination technique. “We’ve never been able to move so quickly from the first step, molecule identification, to the final step, visualizing the completed radiofluorinated tracer using a PET scan. We took a fairly unorthodox approach to the fluorination technique, but it paid off- the entire process now takes just over two weeks.”

“Our radiofluorination technique represents a portal to access fluorinated amino acids like never before,” said Yang. “The method we’ve devised will allow rapid proof-of-feasibility for a wide variety of potential PET scanning molecules, as well as support high throughput production of radiotracers. We are eager to explore the diversity of opportunities for new oncology tracers enabled by this technique.”

Nodwell, Yang, and members of the research group are examining the utility of their fluorination technique for developing other, non-amino acid radiotracers for other PET applications.