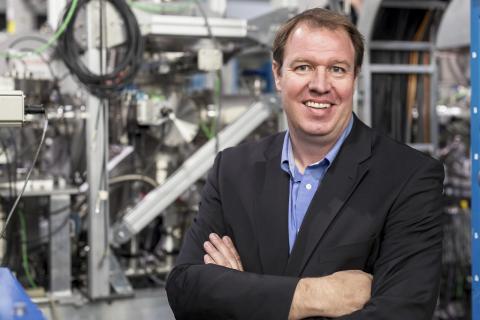 As ALD-Physical Sciences, Dilling will provide leadership, direction, and oversight for TRIUMF’s scientific program in particle and nuclear physics and molecular and materials sciences, bolstering linkages across TRIUMF and to its member universities and international partners. He will work closely with TRIUMF’s Accelerator Division to strengthen isotope delivery, enabling leading edge science and discovery and preparing the lab for its new flagship facility – the Advanced Rare IsotopE Laboratory (ARIEL).

A talented nuclear physicist and an expert in trapping radioactive isotopes, Dilling is no stranger to TRIUMF having first been recruited to the lab’s Science Division (now Physical Sciences Division) in 2001. Prior to his new role, he served as deputy and department head for nuclear physics, deputy division head of the Science Division, and most recently as the interim Associate Laboratory Director for the Physical Sciences Division.

“TRIUMF has been my scientific home for many years, and I am as excited as I was when I first set foot in the laboratory,” said Dilling. “The remarkable people at TRIUMF continue to inspire me. I am looking forward to working with them and our university partners in this new capacity to help shape the future of the laboratory. We are entering an exceptional era for TRIUMF and there are fantastic opportunities ahead of us.”

“Jens Dilling is an extraordinary physicist with a broad experience across the entire TRIUMF program. I am delighted to see him take on the role of ALD-Physical Sciences,” said the laboratory’s Director Dr. Jonathan Bagger. “We look forward to working with Jens to take TRIUMF to a new level of excellence in particle and nuclear physics, and the molecular and materials sciences, particularly as we prepare for the ARIEL era.”

Dilling received both his undergraduate degree (Diplom) and doctorate (PhD) in physics from the University of Heidelberg in Germany. His research interests include understanding what holds atoms together at the most fundamental level (i.e. the strong force), and precision experiments in nuclear physics, in particular atomic physics techniques applied to nuclear physics at accelerators.

As an expert on ion traps, Dilling has been involved in experiments around the world, including at facilities at ISOLDE, CERN, and SHIP at GSI. Dilling designed, built, and operated the TITAN (TRIUMF’s Ion Trap for Atomic and Nuclear science) system at TRIUMF’s ISAC accelerator complex. TITAN has become the fastest and one of the most precise ion trap mass spectrometers in the world, enabling first-time measurements of the quintessential neutron-halo nucleus lithium-11 in a trap, a breakthrough for nuclear physics. Dilling serves on many national and international committees, and received the CAP-Vogt Award for outstanding contributions to subatomic physics research in 2013.