Setting the trap for Ultra-Cold Neutrons 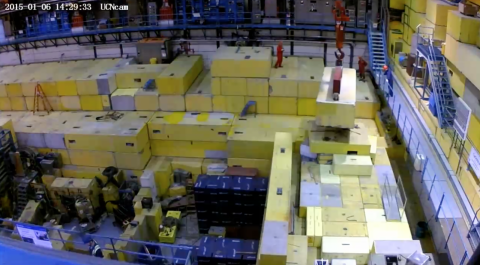 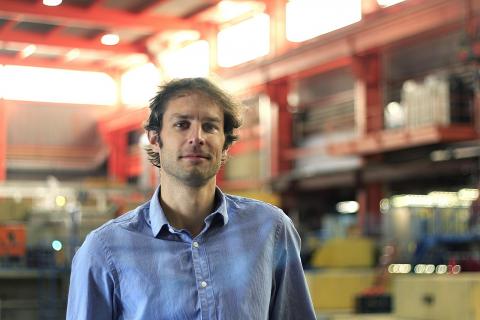 For most of the lab, the end of the annual cyclotron shutdown period marks the beginning of a new experimental season, as beam time makes its way around the facilities.

But for the team behind TRIUMF’s Ultra-Cold Neutron (UCN) project, it is a time to reflect on the progress that was made and assess the final steps towards realizing a first production of ultra-cold neutrons by early 2017.

The UCN source will produce, through a tungsten spallation target, ultra-cold neutrons, which will enable researchers to study the neutron electric dipole moment. Essentially, the team will be probing the distance of the electric charges in the neutron. This requires complex infrastructure.

The problem: it can only be installed during the shutdown period.

Ruediger Picker (RP), a researcher in the particle physics department and UCN project leader, spoke with Communications Assistant Kelsey Litwin (KL) to provide an update on the installation process.

KL: During our last check-in, at the end of the 2014 annual shutdown, the UCN team had just tackled the “immovable block,” hidden underneath the support system of the M15 beam line. It had been in the direct path of the new UCN beam line, which will deliver protons to the tungsten spallation target.  Can you give us a summary of what was done since then?

The kicker magnet for the UCN beam line is a fast ramping magnet. It ramps up and down in less than 50 microseconds. As a result, the cable to power the supply needs to be very large and heavy. The power supply sits on top of the cyclotron vault roof, while the kicker is below in the vault tunnel area. The cable therefore has to penetrate the cyclotron roof beams, needing an S curve routing to avoid radiation shine upward.

KL: The plan for the beginning of the 2015 shutdown was to decommission the M13 beam line and prepare the experimental area. How did that go?

RP: The decommissioning was planned between the 2014 and the 2015 shutdowns. There was a special focus was on the two dipole magnets, B1 and B2. It was decided that the active iron yoke of the B1 dipole would be used as shielding.

During the shutdown, the B2 yoke of the dipole magnet was retrofitted to make it a shielding block, the B1 magnet was moved temporarily for later use, and the M13 beam tube has been sealed to allow pumping down to vacuum. This renders the M13 beam line fully decommissioned.

The experimental area was cleaned up in preparation for the continued installation. As well, the kicker cable was successfully routed as we had planned and the downstream section of the UCN beam line, BL1U, was installed. Finally, the base layer of shielding below the tungsten spallation target was laid down.

All in all, I would say that all important shutdown projects were completed successfully.

KL: With hopes to stay on track for first beam time in late-2016/early-2017, your team certainly does not have any downtime. What is the team up to while physical work is not underway?

RP: We are currently planning the UCN source integration. The source cryostat needs to be incorporated into the TRIUMF infrastructure, in a way that is safe and able to be controlled remotely.

The schedule for finishing the target remote handling system is tight, but doable. So far, the plan is to have first beam in BL1U by mid 2016, beam on target towards the end of 2016.

KL:  You provided us with a time-lapse video of the installation taking place in the Meson Hall over a four-month period. What would you like for someone watching it to take away?

There are four things that I would like to show people. Building a scientific apparatus is 1) a lot of real work, 2) heavy lifting, 3) still a little bit like playing with LEGO, and 4) a shame that we have to cover all the nice equipment back up after each shutdown.

Photos (top to bottom): Image from the UCN construction timelapse video. Ruediger in the Meson Hall, above the UCN site.

UCN Construction during the 2015 Shutdown from TRIUMFLab on Vimeo.