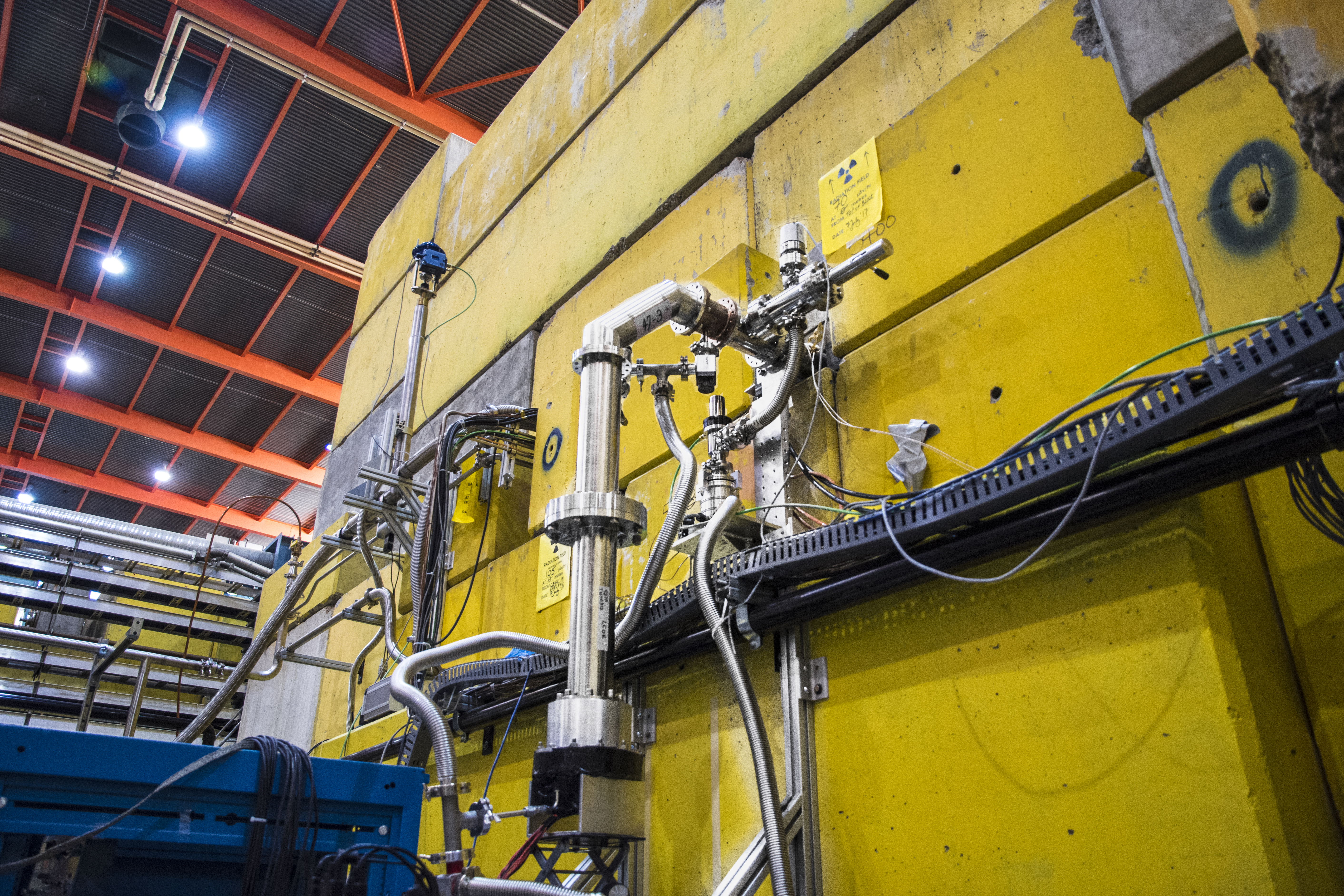 (image: the portal where ultracold neutrons (UCNs) exit and are collected and counted. The UCNs' extremely low velocities and energy make them ideal for investigating fundamental physics properties)

The Ultracold Neutron Facility at TRIUMF

While all the science at TRIUMF is very cool, only one experiment can lay claim to being the (ultra)coolest of them all: the ultracold neutron (UCN) facility.
Scientists tell us that at the very beginning of the universe, equal amounts of matter and antimatter must have been created from the energy of the Big Bang. However, all around us, we see a beautiful universe made only of matter. So arises one of the oldest unsolved mysteries in physics: where did all the antimatter go?
The basic idea of how the universe could have ended up composed of only matter has been known for decades, but theorists have struggled to define a theory by which this mechanism could be realized; likewise, experimentalists have yet to definitively spot where this mechanism might be occurring. Scientists are looking in a variety of places, one being in the infinitesimally fine properties of one well-known subatomic particle: the neutron.
But, in order to use the neutrons for this purpose, the particles must first be cooled and slowed down to ultra-low speeds (5 metres per second, about the speed of a human sprinter), and then collected in special bottles. That isn’t easy, since neutrons are moving at a substantial fraction of the speed of light when they are first produced. And yet...

On Monday, November 13th, 2017, the TUCAN Collaboration at TRIUMF achieved a major milestone by producing the first ultracold neutrons (UCNs) ever created in Canada.

UCNs like those produced at TRIUMF move slow enough (~5 m/s, compared to ~500 m/s for air molecules) and with such low energy that they actually can be trapped and contained inside special bottles. This makes UCNs ideal for a variety of important fundamental physics measurements, including determining the neutron electric dipole moment (the nEDM). The nEDM is currently predicted to be vanishingly small, but if it is measured to be larger than expected, it could aid in solving the puzzle of why there is much more matter than antimatter in the universe!

The Japanese-Canadian TUCAN (TRIUMF Ultra Cold Advanced Neutron source) collaboration formed in 2010 with the goal of creating the world's most intense UCN source to measure the nEDM with unprecedented precision. Between 2014 and 2016, a new proton beamline at TRIUMF was constructed to supply a spallation target for neutron production. During the most recent TRIUMF's annual cyclotron shutdown period, the UCN source prototype from Japan was installed above the target. The secret behind creating UCNs lies in superfluid helium, which is cooled down to a temperature of less than 1 degree above absolute zero (<1K). 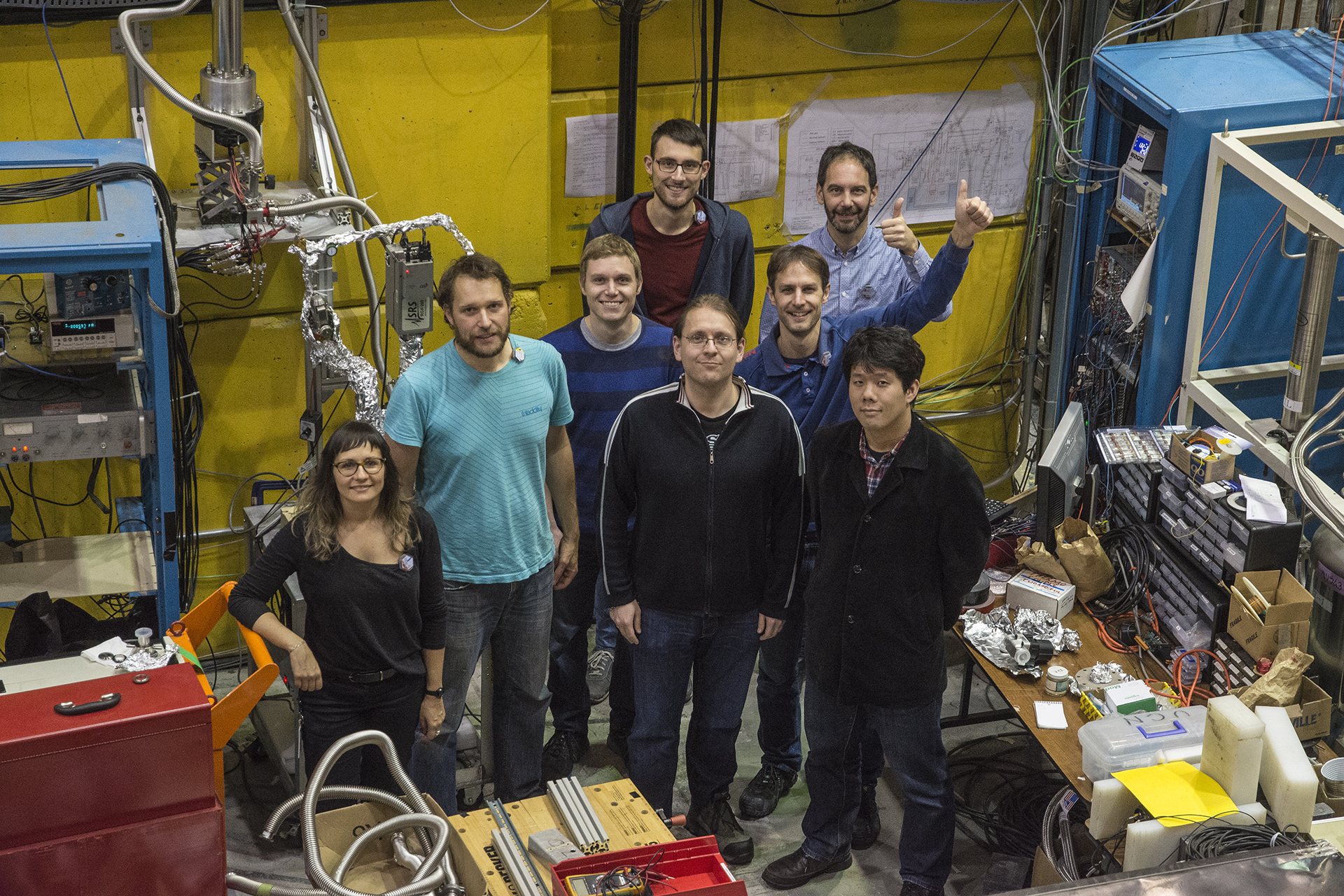 (image: several members of the TRIUMF UCN team gathered on the experimental floor)

The TUCAN collaboration celebrated its first major milestone in November 2016 when it achieved its first beam-on-target; just a year later, the newly-installed UCN cryostat reached its design temperature of approximately 0.8K. Now, the first Canadian UCNs have been created from hot spallation neutrons produced using a 1 microamp, 480 MeV proton beam. The approximate 50000 UCNs counted per “shot” (pulse of protons on target) were well within expectation, enabling the planned experimental program to be carried out. This will include characterizing the source to aid in the development of the next-generation source, with which TUCAN hopes to achieve orders of magnitude more UCNs. The upgraded source will be deployed for the flagship nEDM experiment, which TUCAN hopes to run by 2020. 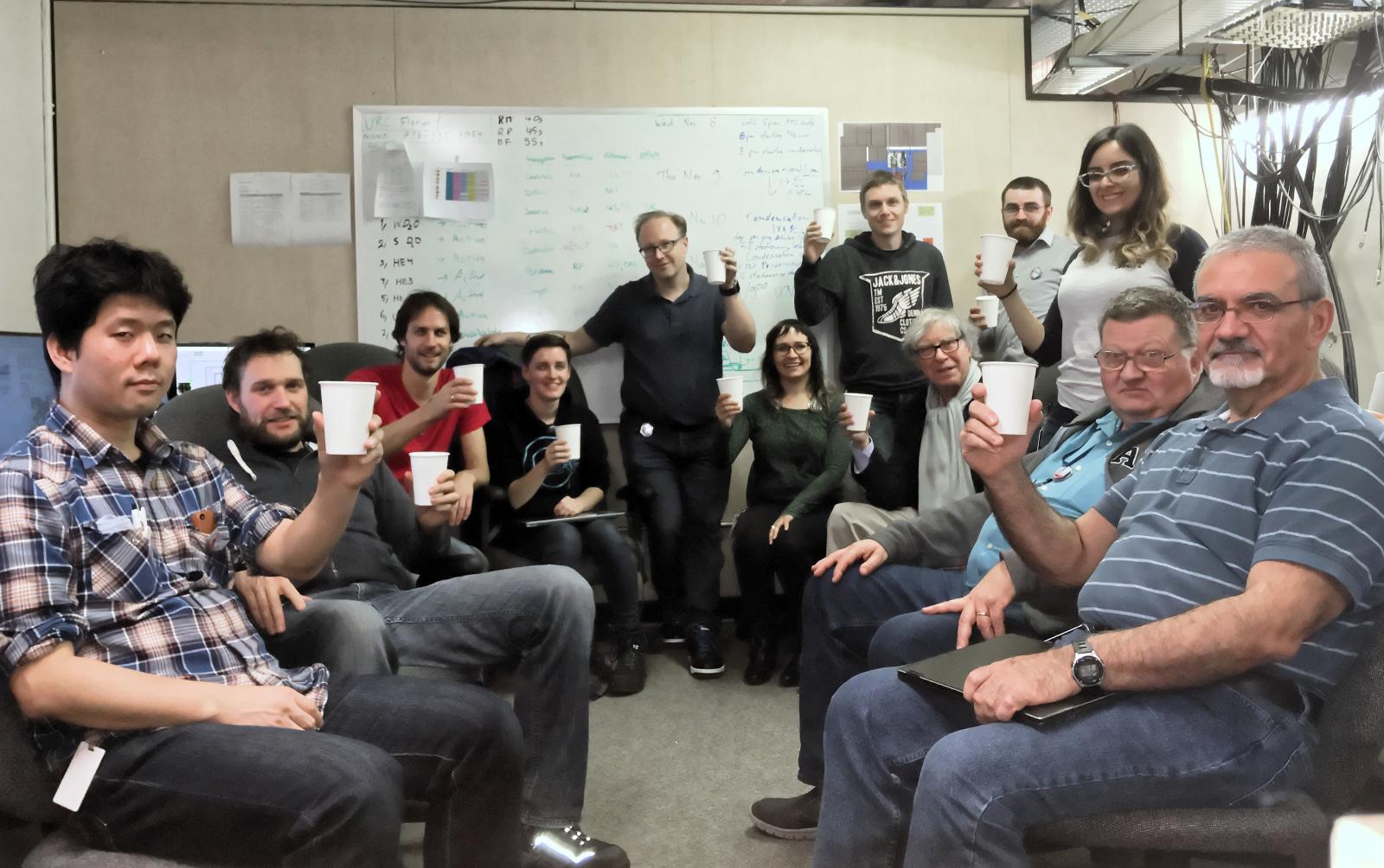 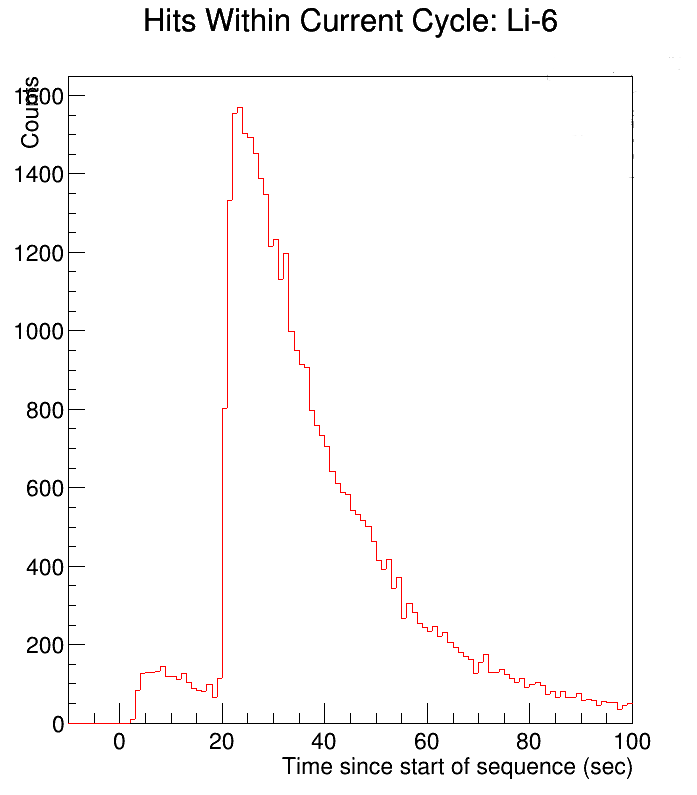 (image: Graph showing the number of ultracold neutrons (UCNs) detected as a function of time for one production cycle. Each cycle consists of irradiating the neutron-production target with a 1 microamp, 480 MeV proton beam for 60 seconds. The decay curve indicates the diminishing number of UCNs in the detection chamber as a result of various loss mechanisms, e.g. absorption in the walls, neutron decay, etc. The number of initial UCNs produced and the loss curve are well within expectations)

Congratulations to the TUCAN and UCN facility teams!

This project is led by the University of Winnipeg under principal investigator Prof. Jeff Martin and is supported by TRIUMF, CFI, BCKDF, MRF, and NSERC in Canada, and by KEK and RCNP in Japan.