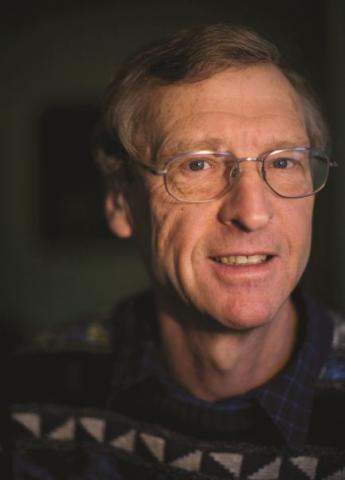 The Canadian Association of Physicists (CAP) and TRIUMF are pleased to announce that the 2011 CAP-TRIUMF Vogt Medal for Contributions to Subatomic Physics is awarded to Professor David Sinclair, a professor of physics at Carleton University and senior scientist at TRIUMF, for his exceptional vision and contributions to the study of neutrino physics in the pioneering SNO experiment, and for exemplary leadership in establishing the SNOLab facility.

Upon receiving the good news, Sinclair said, "I am extremely honoured to be selected to receive this award. Canada has such a strong program in sub-atomic physics encompassing the whole spectrum." Dr. Sinclair has been one of the leaders of the Sudbury Neutrino Observatory (SNO) and it is for his seminal contributions to the design, construction, and operation of SNO that he is awarded the CAP-TRIUMF Vogt Medal.

David Sinclair is one of Canada's most eminent scientists in the field of experimental subatomic physics. He has dedicated much of his research career to solving the "solar neutrino problem," an apparent deficit in the flux from the sun of difficult-to-detect neutrinos that are an essential end product of the fusion reactions in the solar core. To this end, Dr. Sinclair was one of the founders of the Sudbury Neutrino Observatory, the experiment that solved this puzzle. The resolution resulted in a significant revision of our understanding of elementary particles with the confirmation that not only do neutrinos have mass but they also change flavor and constitute an important fraction of all matter in the universe.  The journal Science cited the SNO results as one of the top 10 breakthroughs in all of science in the years 2001 and 2002.

The CAP-TRIUMF Medal is named in honour of Erich W. Vogt, professor emeritus at UBC, former director of TRIUMF, and one of the original pioneers of Canada's primacy in particle and nuclear physics. About the selection of Dr. Sinclair as the inaugural recipient of the prestigious medal, Professor Vogt said, "I am delighted that this first award is being given to David Sinclair who has been an outstanding leader in the Sudbury Neutrino experiments. The work of David and his colleagues has fundamentally changed the way we think about the universe. It removed that nagging doubt, of forty years, about whether we really understood anything about the production of energy deep inside the Sun. My warmest congratulations to David."

Dr. Sinclair added on a personal note, "To be selected from this field for the inaugural medal is a very special honour for me. I am particularly pleased that the medal bears Erich Vogt's name. When I was a graduate student, Erich had already established a reputation as an outstanding scientist and scholar."

Sinclair has continued his leadership in subatomic physics as SNOLab's Director of Facility Development. SNOLab will position Canada at the leading edge of subatomic physics research for years to come. He is currently developing a project called EXO focusing on neutrinos which aims to fundamentally advance our understanding of elementary particles and their interactions.

Nigel S. Lockyer, director of TRIUMF, said, "I am delighted to launch this prestigious award with CAP; it celebrates Canada's strengths in subatomic physics and recognizes those people that have had a global impact on science. David is truly a great physicist and his contributions to science, to other physicists, and to students have been outstanding."

The purpose of the CAP-TRIUMF Vogt Medal is to recognize and encourage outstanding experimental or theoretical contributions to subatomic physics.  While the main criterion for awarding the Vogt medal is the excellence of the research accomplishments, preference will be given for a recent important advance in subatomic physics and to researchers who are still active. The candidate's research should have been done primarily in Canada or in affiliation with a Canadian university, industry or government laboratory.

Dr. Sinclair will be presented with the 2011 CAP-TRIUMF Vogt Medal for Contributions to Subatomic Physics at the 2011 CAP Congress (hosted by Memorial University of Newfoundland in St. John's, Newfoundland, from June 13-17) at the end of his plenary talk and will be recognized during the Congress banquet to be held on Thursday, June 16, 2011.

--Based on a TRIUMF press release