Last month on January 20, 2009, TRIUMF’s Daniel Roberge received a $10,000 cheque. No, he did not win the lottery; it was the annually awarded Dr. Carl H. Westcott Memorial Fellowship, granted to one outstanding graduate student at TRIUMF each year. Daniel, the 22nd recipient of this Fellowship, has not yet formulated a plan on what to do with this money, besides feeding it to his piggybank.

Daniel’s most recent commitment is to the T2K (Tokai-to-Kamioka) neutrino experiment, taking place in Japan. He is working alongside Scott Oser and Thomas Lindner, both from the University of British Columbia, and TRIUMF scientist Stanley Yen, on constructing detectors and designing analysis software for the T2K project. The goal of this experiment is to produce an intense beam of neutrinos at the J-PARC facility in Tokai, and send it shooting 295km across Japan towards the Super-K far detector in Kamioka, in order to study neutrino oscillations during this cross-country travel. The ND280 near detector at the J-PARC site measures the initial properties of the neutrino beam, and provides a comparison with the resulting data taken at the Super-K far detector at the end of the beam’s travel. Daniel’s work is specifically devoted to building the FGD (Fine Grained Detector) sub-system of the ND280 near detector.

This young scientist started showing his passion for physics in high school, and this deep interest has led him through his B.Sc. in Honours Physics at the University of Victoria, and now his graduated studies at the University of British Columbia. Daniel first got involved with TRIUMF in 2002 through his undergraduate CO-OP program. During his two work-terms, he thoroughly enjoyed the hands-on and collaborative nature of the researches at TRIUMF, and the experience became a deciding factor for him to return to TRIUMF for his graduate studies, concentrating on subatomic physics. The T2K project has been especially exciting for Daniel because it allows him to experience various aspects of physics research, whether it be building components or running experiments.

Daniel’s near future is dedicated to academia; he will be continuing to work towards his Ph.D. in the next 2.5 years, and will be participating in the installation of the ND280 near detector at Japan in the upcoming summer. The first beam for the T2K neutrino experiment is expected to be delivered this year.

Congratulations to Daniel on earning this recognition, and we wish him the best of luck! 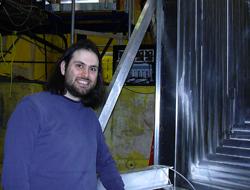 Daniel Roberge standing next to the FGD