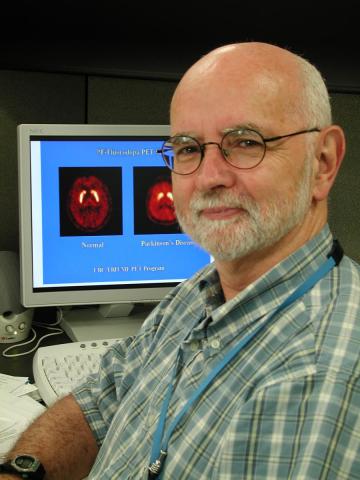 On March 31, TRIUMF’s Dr. Thomas J. Ruth. was informed by the Society of Nuclear Medicine (SNM) that he had been selected to receive the 2011 Michael J. Welch Award of the Radipharmaceutical Sciences Council, which is given to individuals who have made a significant contribution to the field of radiopharmaceutical sciences. “Dr. Michael J. Welch is a pioneer in the field; it is an honor to receive this award, however this award really reflects on the great people with whom I have had the opportunity to work,” said Tom.  In addition to being a research scientist at TRIUMF, Tom is jointly appointed to the BC Cancer Agency as a senior researcher.  This award is significant as it indicates North American recognition of Tom's work.

Tom received his master’s degree in Nuclear Chemistry from College of William and Mary in 1967. In 1973, he received his doctorate in Nuclear Spectroscopy from Clark University, MA. After two years of teaching, Dr. Ruth came across an opportunity of producing the medical isotope Astatine-211 with Dr. Al Wolf at Brookhaven National Laboratory. This opportunity not only provoked Tom’s interest in applying radioisotopes to the Physical and Biological Sciences but also opened up doors for Tom to explore the application of Nuclear Science to Medicine. In 1980, Tom was recruited as a Research Scientist by TRIUMF to help develop the UBC PET (Positron Emission Tomography) group. Tom was appointed as the Associate Director of the UBC/TRIUMF PET program in 1986 and the Director from 1989 until 2008. During that time he oversaw the installation of 4 PET scanners and the TR13 cyclotron, which is specially designed for producing Medical Isotopes. The TR13 became the prototype for the low energy TR series of cyclotrons manufactured by ACSI in Richmond. Tom also collaborated with Dr. John Vincent at TRIUMF to develop a reliable way to make a high yield Rubidium metal target for the production of the Sr-82-Rb-82 generator. They developed the separation chemistry and a generator system based on a tin-chloride column, which was adopted by the Ottawa Heart Institute where they use Rb-82 for heart imaging on a daily basis.

Though Tom has been contemplating his retirement when he turns 70 in a year, he remains active and consistently contributes to his field. In March 2012, Tom will be finishing one of his four current projects that deals with accelerator-based solutions for the medical-isotope crisis. He has been working with researchers at BC Cancer Agency, Lawson Health Science Centre in London, Ontario and the Centre for Probe Development and Commercialization in Hamilton on the proposal to develop the production of technetium-99m via PET cyclotrons to help ease the shortage of Tc-99m.

Although Tom humbly denies that he has made any great discoveries to earn him the Award, his colleagues clearly respect his enormous service to the community.    Congratulations, Tom! It has been a great pleasure to have you as part of the TRIUMF family.