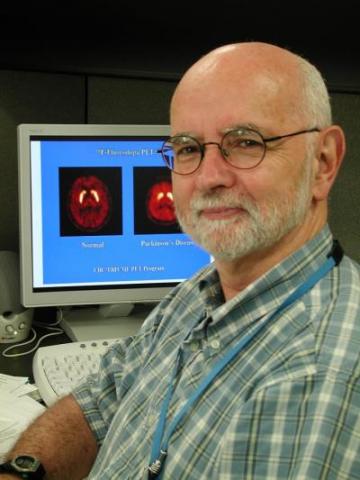 Last Thursday, TRIUMF held a scientific symposium in honour of Tom Ruth’s full retirement from the laboratory. As Tom essentially launched the nuclear-medicine program at TRIUMF, the symposium featured a number of talks pertaining to nuclear medicine, molecular imaging, and medical isotopes. Speaking to a packed auditorium, some of the eminent minds in the nuclear medicine field, such as Joanna Fowler (Brookhaven), John Clark (University of Edinburgh), and Francois Benard (UBC/BCCA), delivered their presentations in honour of Tom and his achievements.

After the symposium ended, a reception was held. TRIUMF’s Director, Nigel Lockyer, described the atmosphere of the evening as being “A roast of sorts,” adding, that this “Can only be done to someone that we have tremendous respect for as a scientist and human being.”

Words from his colleagues portray Tom as a mentor and a friend. Paul Schaffer, Head of the Nuclear Medicine Division, says, “After over 30 years (of which I’ve experienced but a small portion) Tom is set to ‘retire'."

“Over the past three years of my time at TRIUMF, I can say that Tom’s mentorship has allowed me to see how a potent mixture of dedication, vision, inclusiveness, and leadership can create a world-class scientific program. One simply has to rely on the fundamentals: honest curiosity, the scientific method, Occam’s razor, and then draw conclusions using objective truths to do great science.

“With that, I wanted to state my hope that Tom genuinely enjoys his newfound freedom, spending it with family, friends and those he holds dear. My hope, too, is that his innate curiosity keeps him engaged in what we’re doing at TRIUMF, and that for some strange reason, he now find its more fun than he used to.

“To use an analogy he’s used before: Tom, you should know that your boat is always welcome at the TRIUMF marina and that it will be difficult to ever ‘send you on your way'.”

Nigel says, of his experiences with Tom, “Tom is the ultimate teacher. He is patient, easy to understand, and knows everything and everyone in his field around the world. I always enjoy talking with and learning from Tom.”

Tom received his master’s degree in Nuclear Chemistry from the College of William and Mary in Virginia in 1967. In 1973, he received his doctorate in Nuclear Spectroscopy from Clark University, Massachusetts. Tom began his relationship with TRIUMF in 1980, when he was recruited as a Research Scientist by TRIUMF to help develop the UBC PET (Positron Emission Tomography) group. Tom was appointed as the Associate Director of the UBC/TRIUMF PET program in 1986 and served as the Director from 1989 until 2008. During these years, he oversaw the installation of four PET scanners and the TR13 cyclotron, a cyclotron developed specifically for producing medical isotopes. Tom also oversaw operation of the machine for routine production of clinical research isotopes for the Pacific Parkinson’s Research Centre and the BC Cancer Agency. He has also pioneered the design and implementation of target technologies; lately, he has been one of the world’s leading expert commentators on the non-reactor-based production of medical isotopes such as technetium-99m.

On behalf of TRIUMF, congratulations, Tom!  May you continue to age gracefully, but never decay or go unstable.