TRIUMF is a world-class subatomic physics research laboratory located on the campus of the University of British Columbia, a twenty-minute drive from downtown Vancouver. TRIUMF is one of three subatomic research facilities in the world that specialize in producing extremely intense beams of particles. The heart of the facility is the world's biggest cyclotron, which is used to accelerate 1000 trillion particles each second!

A cyclotron is a special type of particle accelerator that accelerates particles as they follow a spiral path through it. The TRIUMF cyclotron accelerates particles inside an air free chamber between the poles of an electromagnet whose magnetic field guides the particles in an expanding spiral path. The particles are accelerated by 'kicks' of electric voltage every half turn. When the beam reaches the outside edge of the tank, it is bent into pipes called beam lines, which lead to experimental halls.

Interesting facts about the TRIUMF Cyclotron:

The cyclotron produces beams of protons. By making these protons strike different kinds of targets, intense beams of neutrons, pions and muons (other elementary particles) can also be created, thus making possible many different kinds of experiments. More recently, the two ISAC (Isotope Separator and Accelerator) facilities have greatly expanded the possibilities for experimentation here at TRIUMF. You can learn more about ISAC here.

Because of these unusual beams of very high intensity, scientists from over twenty-five countries have come to TRIUMF since 1974 to run their experiments.

TRIUMF is also a centre for the practical application of this basic research:

Continue on to TRIUMF Milestones, or explore the rest of the site and learn about the activities going on at TRIUMF. 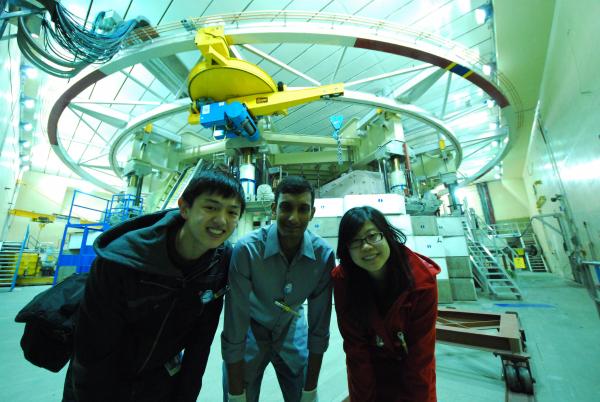