TRIUMF Scientist is an Open Book 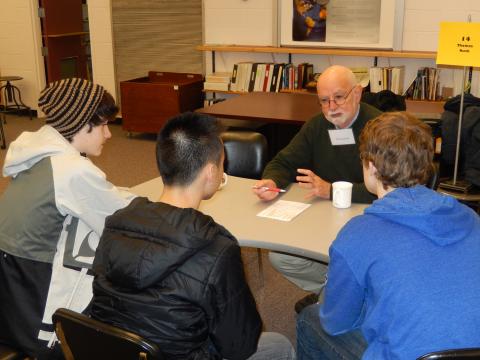 When students enter high school, one question begins to loom large, repeatedly posed by parents, teachers, and impending postsecondary application deadlines: “What do you want to be when you grow up?”

Helping to shed light on this decision, math and science professionals gathered at John Oliver Secondary School in Vancouver last Thursday, forming a Human Library for students to investigate possible careers in the sciences. Among these living, breathing “books” was Dr. Tom Ruth, a retired TRIUMF scientist in the nuclear medicine field who uses medical isotopes to study cancer and Parkinson’s disease. Joining 30 other science professionals from Vancouver, Tom was “on loan” all day to share the story of his career path and offer advice for students as they begin to pursue their own.

Grade nine students at John Oliver “checked out” the human books for 20-minute sessions, in which they were given free reign to ask any questions that crossed their minds. Circulating between geneticists, Arctic pilots, mineralogists, video game designers, marine mammal rescuers, weather broadcasters, and many others, students had the unique chance to discover first-hand a world of career possibilities in their own backyard.

The diverse professionals gathered before the young students dispelled any Victor Frankenstein stereotypes of eccentric scientists with thick glasses and wild hair, holed up in their laboratories alone. Instead, the Human Library event gave students the chance to “discover the possibilities of math and science careers that are fun, creative, and collaborative.” With this same goal, TRIUMF also welcomes hundreds of high school students each year to tour the lab and meet physicists, sharing their world-class work with the local community.

Students expressed curiosity about the day-to-day work of a researcher, wondering what education and skills are needed to do the job. Other students seized the opportunity of a private audience with a scientist to do some myth-busting, wondering, “Is it possible to turn coal into diamonds?” But the question that arose again and again was, “When you were my age, did you know you wanted to become a scientist?”

Students were reassured by Tom’s response, which acknowledged the roundabout path that brought him to his research career. After obtaining his undergraduate degree in chemistry, Tom spent a year working for a shipyard that employed thousands of people. Realizing that this wasn’t the life for him, he returned to school and taught at the college level for many years. It wasn’t until he was in his thirties, married with children, that he decided to pursue his Ph.D. and a career in research.

His expertise in the production of medical isotopes brought Tom to TRIUMF in 1980, where he played an instrumental role in establishing TRIUMF/UBC’s Positron Emission Tomography (PET) program. An expert in the field of non-reactor-based production of medical isotopes, Tom has had many opportunities for travel to international labs, recently returning from Armenia where he was helping to establish their medical isotope infrastructure. In conversation with students, Tom stressed that though the path may not be straightforward, as long as you pursue your interests, you’ll be on the right track.

“Be open to changing your mind,” he advised. “And be prepared to respond to opportunity.”