Researchers with CERN-based ALPHA (Antihydrogen Laser Physics Apparatus), the world’s foremost antimatter experiment, have announced a major new step in the investigation of the physical properties of antihydrogen. 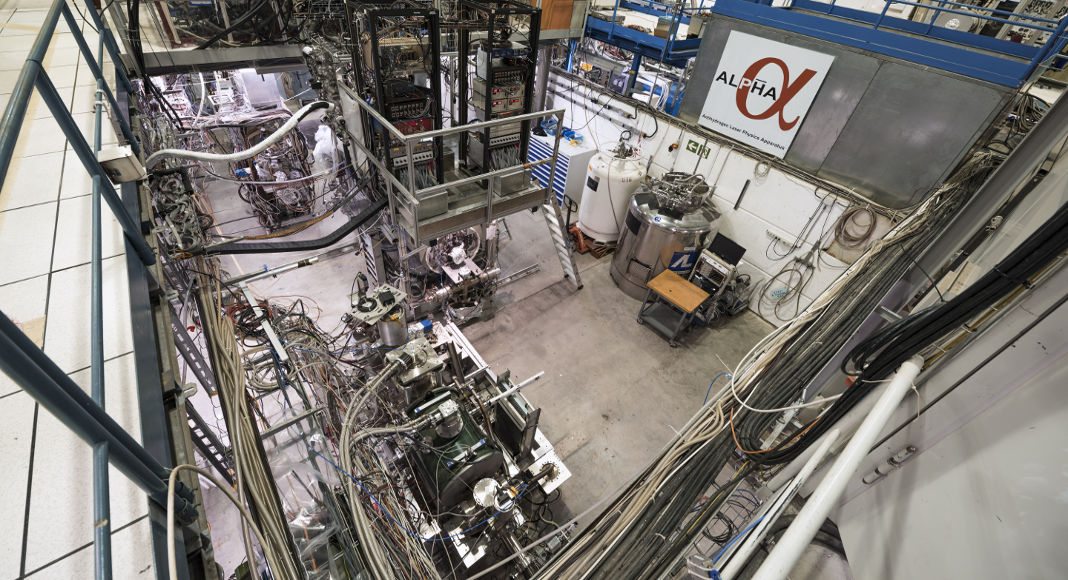 In a new paper in the distinguished journal Nature, the ALPHA collaboration describes the first-ever documentation in antihydrogen of a phenomenon called the Lamb shift, which was first observed in hydrogen by Willis Lamb and Robert Retherford in a Nobel-prize winning experiment in 1947.

The Lamb shift experiment remains one of the most impactful observations in the history of physics research. Using microwave spectroscopy – then a novel technique that had originated in microwave science programs pursued during the Second World War – Lamb and Retherford were able to measure the fine structure of hydrogen with unprecedented precision. Their results confirmed previous indications that hydrogen’s structure adhered only imperfectly to the predictions of the Dirac equation, the reigning model for quantum mechanics at the time.

The conclusions of the Lamb shift experiment, which assessed the energy differential between 2S1/2 and 2P1/2 orbitals, alluded to a 1000 MHz divergence from the Dirac-predicted energy levels – a small but significant discrepancy dubbed the Lamb shift. This discrepancy between experiment and theory opened the door for further refinements to Dirac’s landmark equation and ushered in a new paradigm in quantum physics, including further advances to quantum electrodynamics, the theory that describes how light and matter interact.

Now, in a critical next step in the study of the physical properties of antimatter, the ALPHA group has measured the Lamb shift in antihydrogen to be consistent with values for the Lamb shift in hydrogen, highlighting yet another key symmetry between matter and antimatter.

“Lamb’s experiment showed that the Dirac equation was not the full story of the inner workings of the atom,” explained Dr. Makoto Fujiwara, TRIUMF research scientist and principal investigator for ALPHA-Canada, the collaboration of Canadian contributors to ALPHA. “There was an understanding that the equation needed further refinement, but the Lamb shift results provided Feynman, Schwinger, Tomogana, and others with the first step towards further inquiries. It is truly a benchmark in atomic physics, and we have here its first experimental evidence in antimatter.”

The results are the latest in ALPHA’s pioneering spectroscopic validations of the apparent symmetry between matter and antimatter. In 2018, ALPHA determined with a high degree of precision the 1S-2S transition, also finding that to be consistent with hydrogen; in 2017, the group confirmed hyperfine splitting in antihydrogen.

“These results aren’t the first evidence of quantum electrodynamics at play in antimatter,” said Fujiwara. “We’ve also achieved very high precision with several other spectroscopic measurements. One exciting avenue for further study is the application of laser cooling to further increase the precision of several of these measurements in antihydrogen.”

While ALPHA’s results have pointed overwhelmingly to symmetry between matter and antimatter, it is noteworthy that the ALPHA experiment’s ongoing mission is to determine which if any discrepancies exist between hydrogen and antihydrogen; any breakage in this symmetry would unsettle our best theoretical frameworks for describing the Universe, including the inexplicable predominance of matter over antimatter.

As the lead institution for ALPHA-Canada, TRIUMF has played an important role in the evolution of the antimatter measurement program. Cam Marshall and Art Olin led TRIUMF teams in building the ALPHA-2 cryostat, the experiment’s second-generation antimatter trap and the first chamber of its kind to allow laser light to be beamed at antimatter. This advancement enabled the deployment of the Lyman-alpha laser and supports the experiment’s proposed application of laser cooling for future experiments. Further, much of the particle detection electronics and analysis techniques (which incorporate elements of machine learning to analyze the data) was developed at the lab. TRIUMF is also involved in the construction of a major detector for a new experiment, ALPHA-g, to measure the gravitational interaction of antimatter.

Congratulations to ALPHA-Canada and the entire ALPHA collaboration!

You can read the paper in Nature here, and read CERN’s story here. UBC’s story is here.