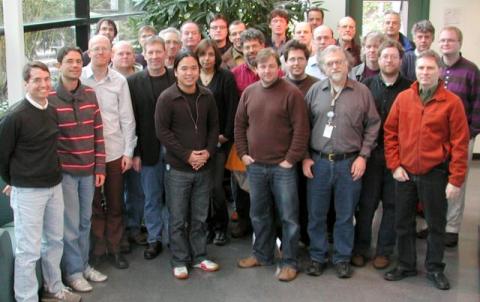 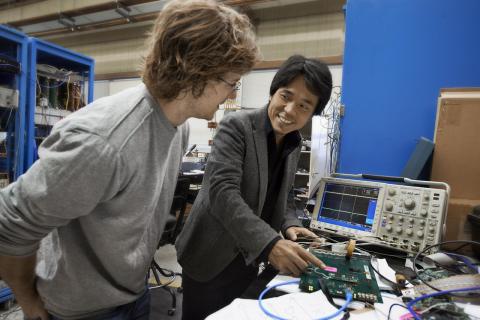 Canadian scientists who were part of an international collaboration that narrowed the gap between sci-fi legend and reality will be receiving a prestigious national award at a ceremony in Ottawa today. For their work in creating, capturing, and characterizing the antihydrogen atom, the ALPHA-Canada Team are being presented with the NSERC John C. Polanyi Award for 2013, which “honours an individual or team whose Canadian-based research has led to a recent outstanding advance in the natural sciences or engineering.” The Award recognizes the seamless collaboration among the multidisciplinary team, their mastery of multiple technologies, and their tight integration with the international collaboration based at the CERN laboratory in Geneva, Switzerland.

The ALPHA Collaboration has developed a game-changing experimental program to help explain how the universe was able to form after the Big Bang. The initial breakthrough came in 2010 when they captured antihydrogen (the antimatter partner to normal hydrogen) for the first time. Then in 2011 they were able to hold antihydrogen in a sophisticated “magnetic bottle” for over 16 minutes – 5000 times longer than before. In the latest experiment, published in 2012 in the journal Nature, the collaboration (led by the Canadian team) measured for the first time the response of trapped antihydrogen to microwaves, which opened the door to comparing it to the extremely well-known response of normal hydrogen. Any discrepancy between the two would yield invaluable information for why the universe is dominated by normal matter, while the antimatter has all but disappeared.

The experiment was a multidisciplinary tour de force, combining more than a dozen plasma, atomic, condensed-matter, particle, detector, and accelerator physicists and students from the University of British Columbia (UBC), Simon Fraser University (SFU), the University of Calgary, York University and the TRIUMF subatomic physics research lab in Vancouver. Speaking on behalf of the ALPHA-Canada Team, Dr. Makoto Fujiwara enthused “We are thankful to NSERC, NRC, our home universities and TRIUMF, as well as our scientific colleagues around the globe for their risk-taking and support. ALPHA truly exemplifies the spirit of international cooperation.”  TRIUMF Science Director Dr. Reiner Kruecken remarked “This award is a great honour for the ALPHA-Canada Team and TRIUMF is proud of the critical contributions by our scientists and staff to the breakthroughs of the international ALPHA collaboration in trapping and studying antihydrogen.”

The ALPHA experiment will soon be back online after a lengthy shutdown of the CERN facility. The Team has been hard at work making a series of improvements to the experimental apparatus. These enhancements will enable the collaboration to make much more detailed measurements of the atomic structure of antihydrogen, opening up a precision frontier into the anti-world.

See the NSERC video of the ALPHA Canada team.

--Based on a TRIUMF press release
Photos courtesy NSERC and TRIUMF.